As more companies build in-house agencies instead of hiring third-parties to handle their marketing, the majority say the greatest benefit of doing so is not in cost savings, but is in having increased influence over what happens to their advertising and the positioning of their brands, according to Digiday research.

Thirty-eight percent of 214 marketers Digiday surveyed in November said having increased control over their marketing functions was the greatest benefit of an in-house agency. Meanwhile, 21 percent of respondents said they favored the shortened timeline in which work was completed, 18 percent said they believed it resulted in better positioning of their brands, and just 13 percent said they were most enthused about cost savings.

Issues around overbilling, murky fee structures and cumbersome workflows that delay projects might convince brands to in-house their marketing work, but most sat that’s not how they benefit most from the tactic.

Approaching in-housing as purely a matter of cost-saving is “short-sighted,” according to Mike Boyd, senior vice president of enterprise brand marketing at Nationwide. There is “no satisfaction or benefit in simply getting the work done in-house. You have to elevate the work somehow,” he said.

Boyd said that Nationwide’s biggest benefit of having an in-house agency, aptly called iNHouse, has been the increased control it affords the company over its marketing efforts.  He emphasized that Nationwide continued to work in lockstep with its agency partners. Universal McCann continues to consult on Nationwide’s media business and it still works with Ogilvy for social campaigns. However, he added, “no one can tell the Nationwide story better than a ‘Nationwider.’”

But when it comes to the type of control companies are looking to exert, that can mean different things. To some, controlling marketing means owning their programmatic buying so their ads show up in more brand-safe environments. The New York Times found that since taking ownership of its media buying responsibilities, it was less reliant on measurement vendors and had a greater understanding of its digital supply chain.

For others, like Nationwide, greater control could mean centralizing their creative development to more efficiently prioritize what work is being done. Boyd said that by having an in-house studio, “we have clearer visibility into the work people are doing” Because of that, he said, Nationwide is “ensuring that people are working on the highest value projects and that the talent aligns with the project.” 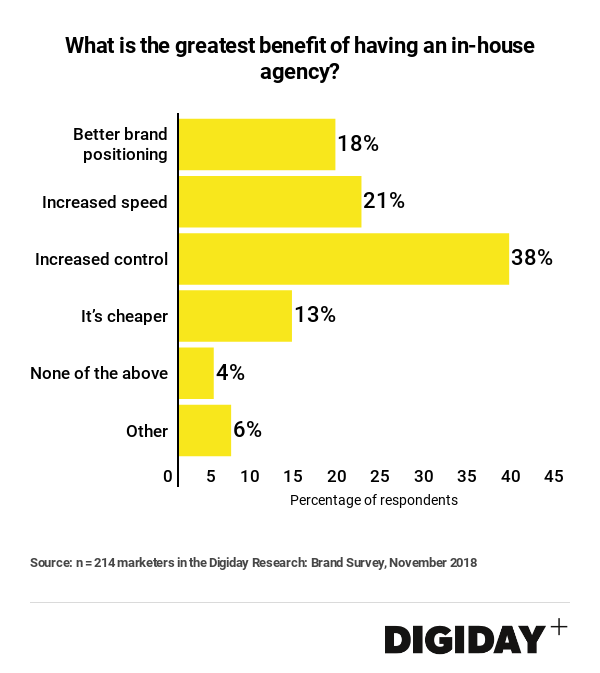 Marketers reaping the benefits of newfound control over their advertising also highlights the changing nature of their relationship with their agencies. Now that the majority of marketers surveyed by the Association of National Advertisers last year have an in-house agency, many companies are adopting “hybrid models” where companies own parts of their marketing while relying on their agencies for specialized services, and to help fill demands marketers can’t meet with internal resources. For example, Marriott handles media planning and strategy but relies on Publicis to execute media buying.  Elsewhere, The Clorox company created an in-house agency in response to demands for content while continuing to outsource its media spending.

Don’t expect agencies to disappear soon, though. Even as companies look to take various marketing functions like programmatic buying and creative strategy in-house, according to earlier Digiday research, there’s a realization among marketers that there is a limit to how much can be done internally. “When you think about the breadth of work that needs to be done, trying to be full-service agency can be overwhelming. It is important early on to define your core strengths so you can deliver the best value,” said Boyd.