Digiday Research: 30 percent of agency staffers are looking for a new job

Loyalty is hard to come by in the agency world. People who work in marketing and advertising agencies are notorious for bouncing between companies in search of new opportunities and more money. Thirty percent of the 446 agency professionals surveyed by Digiday this January said they were on the hunt for a new job, and another 48 percent said they would be open to opportunities, although they were not actively looking. 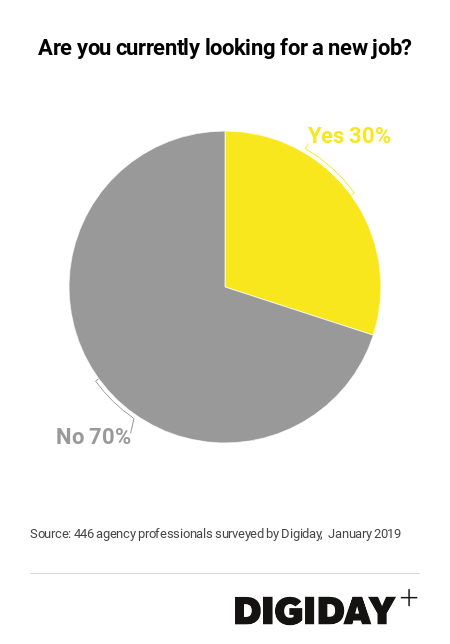 That could add pressure on holding-company owned agencies already adapting to new business models and undergoing rapidly-changing relationships with their clients. With unemployment rates near 50-year lows at 3.9 percent, agency workers have more power than ever in the job market and can often find new jobs in days, if not a few weeks. As a result, agencies may have to shell out higher salaries and counter-offers than normal to keep their best staff as they struggle to operate on tightening margins 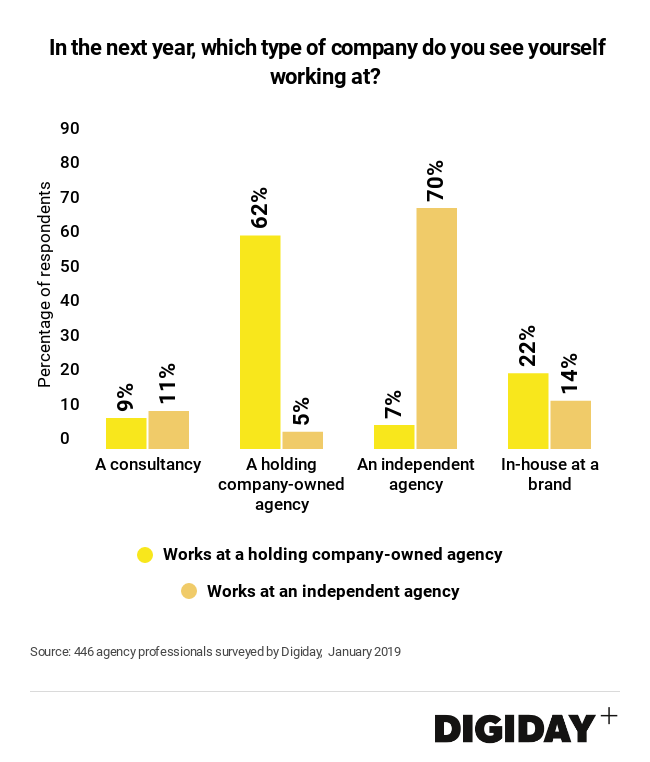 Why agency professionals look for jobs

When it comes to what influences people to look for new jobs, three key reasons stood out; happiness, opportunities for advancement and, of course, money. Only 10 percent of respondents who identified themselves as ‘happy’ in their jobs stated that they were looking for new ones. Comparatively, 65 percent of survey takers who were either unhappy or indifferent said they were looking for new opportunities.

How much a person makes also matters. Forty-one percent of people who earn less than $50,000 per year are looking. As respondents earned more money in every salary range, they were decreasingly likely to look for new work.

Lastly, people need opportunities for advancement. Fifty-eight percent of people who thought they did not have an opportunity to progress their career were looking for jobs. People that said such opportunities existed for them were less likely to be looking, just 19 percent of them have started their job search.

Despite how much people at marketing and advertising agencies say they value a positive work-life balance, those cranking out long nights in the office are not any more likely to be looking to leave than people working shorter days. Twenty-nine percent of people working over 50 hours a week said they were looking for a new job, the same percentage as people working a standard workday. Job seekers might claim to want roles that offer a beneficial work-life balance when seeking out opportunities, but the lack of work-life balance alone may not be what leads agency people to leave.

What people look for in new jobs

As agency professionals filter through multiple job offers, factors like compensation, advancement opportunities and a beneficial work-life balance played a more significant role in the decision-making process than trendy work perks and social events, according to the Digiday survey. 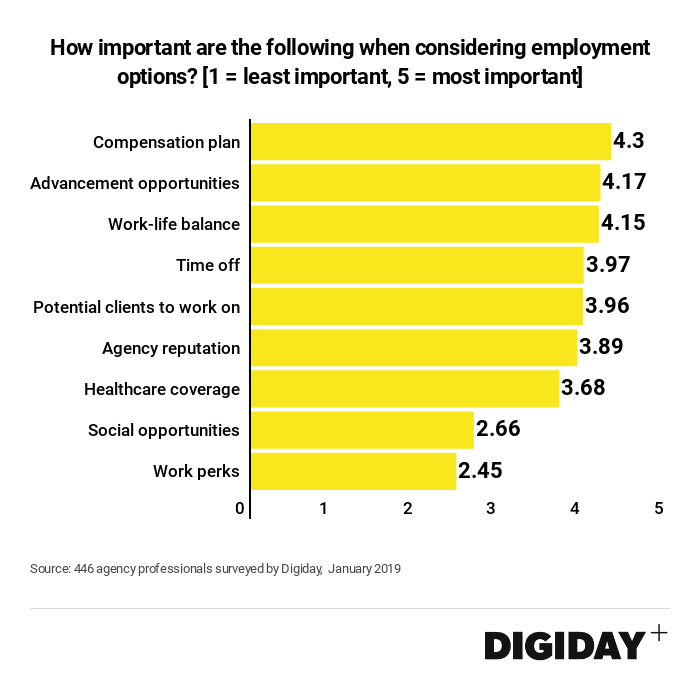 Where a person works, either at a creative agency or a media agency, or an independent agency or a holding-company owned agency, seemed to have minimal correlation with how respondents rated the importance of what influences if they accept a job. Agency staffers, regardless of the company they are at, will on average, have commonly shared views over what is most important. Gender also appeared to not have a significant influence either.

Instead, Digiday respondents answers were most likely to be impacted by their income level and the years of experience they had. For people making under $50,000, advancement opportunities were actually more important than salaries. Though, if you asked, they would take the raise too. Additionally, those under making under $50,000 also placed a greater emphasis on the social opportunities provided by their a potential new agency. While social events and after-work parties can be great networking opportunities, they also let cash-strapped agency staffers pretend they can afford to live the glamorous lives their social profiles would lead you to believe.

For agency respondents with fewer than four years of experience, presumably, health-care coverage was much more important than it was to the average respondent.

On the other end of the work spectrum, respondents with 15 years of experience or more cared far less than average about work perks, advancement opportunities, and social events. But like younger employees they also, and understandably, cared more about healthcare coverage than their middle-aged peers.