This is the first post in a series examining agency culture, compensation, workplace environment and job security. The following data were collected with surveys of 446 agency professionals from holding agencies, independent shops and consulting firms, conducted in January 2019.

Salaries are often a point of consternation for those working at marketing and advertising agencies, who often say they are expected to work to tight deadlines and for unreasonably long hours. But according to Digiday Research the majority of agency employees, 62 percent, said they believe they are paid fairly for the work that they do.

While there is no shortage of agency employees disgruntled by what they make, they appear, on average, more likely to feel their pay accurately reflects the value of their work than the average American worker. A national survey by Robert Half found that 46 percent of American workers do not believe that they were paid fairly compared to 38 percent of respondents in the Digiday survey. 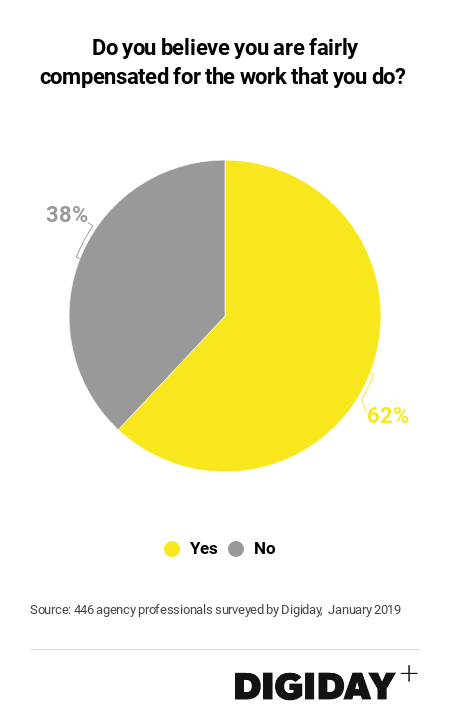 There are several factors that could impact whether a person feels they are justly compensated for their work. Digiday examined the type of agency a person worked at, how the agency was owned, respondents’ base income, and their gender, to see what effect these variables had on respondents’ answers.

Of all the variables Digiday examined, the two with the largest impact on whether people felt they were paid fairly were income and gender.

Income was measured by base salaries in thousands of dollars, though many agencies roles also include various bonuses or stock options based on performance targets that can significantly contribute to respondents annual take-home pay.

Seventy-percent of respondents to the Digiday survey that make a base salary below $50,000 a year said they do not think they are fairly paid. That’s perhaps unsurprising given that some agencies still have entry-level roles that pay just $25,000. Agency workers frequently describe situations in which numerous staff departures have left those who remained overworked, but never compensated for additional work they are expected to take on. Low wages at agencies have even forced some young staffers into second jobs, like driving for Uber or Lyft.

For marketers making over $50,000, however, that perception begins to change. Fifty-five percent of those respondents who said they earn between $50,000 and $99,000  said they think they’re paid fairly. But when people earn a base salary of at least $100,000, the likelihood that respondents said they were paid fairly rose significantly. Seventy-one percent of people who reported a base income between $100,000 and $175,000 said they thought they were fairly paid.

Once people reach base salaries of six figures, their satisfaction with their pay remains roughly consistent. People who made between $100,000-$125,000 and $150,000-$175,000 were nearly equally as likely to have similar satisfaction rates regarding their pay. Perhaps unsurprisingly, those that make over $175,000 were most likely to say that they believe they were paid fairly.

Women at every pay level were less likely to say they were fairly paid for their work than men. In total, 54 percent of women said they thought they were being paid fairly, compared to 68 percent of men.

The ownership of the agency, either by a consulting firm like Accenture or Deloitte, a holding company like WPP or IPG, or an independently owned agency, had a minimal influence on respondents answers.

Consulting firms, flush with cash and resources, are snapping up media and creative agencies to add to their list of services. But the difference between whether someone who believed their pay represented fair value for their work and was employed by a consulting firm-run agency versus other agency models was negligible. Fifty-eight percent of those at consulting firms said they were paid fairly compared to 59 percent of people who worked at agencies owned by holding companies. Respondents at independently owned agencies were slightly more likely, 64 percent to say they were paid fairly.

This is not to say that one type of agency model pays better than another. In fact, some marketers are finding that agency salaries are increasing across the board as demands for talent are heating up. Rather, agency professionals said they felt they are paid fairly regardless of where the work.