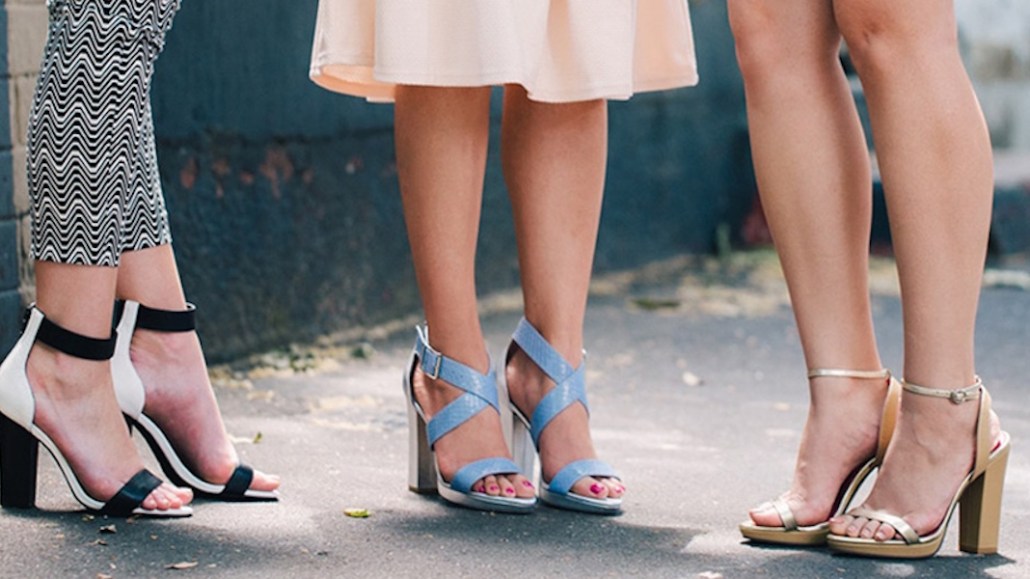 For Shoes of Prey co-founder and chief creative officer Jodie Fox, the only way to scale her customizable footwear business was to forego third-party manufacturers and bring all production in house.

Shoes of Prey’s e-commerce site offers trillions of variations of heels, boots, flats and sneakers, which shoppers can tailor themselves — they start with a blank-canvas silhouette shoe style, and then choose material, color, toe shape, heel height and width. Founded in 2009, Shoes of Prey’s biggest challenges were mass-producing customized shoes at scale and delivering them to customers quickly. When it launched, lead time from design to delivery was 10 weeks. After building its own factory in 2014 and moving all production there in 2016, Shoes of Prey has cut that window down to a two-week guarantee, with a one-week express shipping option.

“There’s an equation in retail around customer expectations: time plus experience, plus value proposition. You can get shoes anywhere, but you can’t get customized shoes at an accessible price everywhere,” said Fox, reasoning that when ordering bespoke items, customers are comfortable waiting longer. “That being said, we’re heading to a future where customized product is the norm, and so the immediacy of that product is extremely important.”

Fox said that, as the business grew, it became clear that third-party manufacturers couldn’t scale a customized production process under the same roof where products are manufactured at mass volume. Initially, Shoes of Prey — which hired its first chief operations officer, Chris McCallum, in 2016 — tried to work with manufacturers to implement a proprietary production system that would operate differently than the rest of the workshop.

“Ultimately, they decided no,” Fox said. “These manufacturers rely on volume, with razor-thin margins, so it’s incredibly difficult to step outside of that and try anything different. When we started the business, we were clear that we were not a manufacturer. But it’s not possible for customization to scale without strong manufacturing behind it.”

Shoes of Prey’s factory, located in China, has allowed the brand to double production volumes without increasing its workforce. The company does not disclose specific production or revenue figures, but its 2016 end-of-year report said that, to date, customers had designed 6 million shoes. Intelligence platform Owler estimates that Shoes of Prey’s revenue hit $2.5 million last year. The company has raised a total of $26 million in venture funding.

Mass customization at scale has come closer to a reality for retailers hoping to differentiate themselves in a crowded market by offering bespoke products. Other players in the space, like Mon Purse and Indochino, have chiseled down production and ship times to four weeks for purses and suits, respectively — which was Shoes of Prey’s rate, as recent as January. To speed up processes, Mon Purse uses a Japanese production method that streamlines manufacturing by tackling different purse styles by day; Indochino keeps fabric in stock, launching production as soon as something is ordered.

“Mass personalization is finally becoming a reality,” Celine Finch, Deloitte’s consumer business research lead, wrote in the study. “Businesses that embrace personalization have a differentiated proposition that could lead to sustainable growth.”

In order to minimize shipping times, the Shoes of Prey team had to rethink the traditional factory setup. Typically, said Fox, production happens via a “batching” method, where different teams of technicians tackle different steps of production at the same time — that way, it comes together quickly. For customized retail, orders can only be filled as they are placed, meaning batching doesn’t work — technicians would be waiting around until they had something to do, causing inefficiencies, said Fox.

So the team developed a software that enabled efficiency throughout the production process without needing large volumes. That meant a transparent process: Thanks to a tracking technology, Shoes of Prey can see what step any shoe in the factory is at, at any given time, and pass it off to the next team in the production cycle that’s ready to take it on. Because Shoes of Prey offers more sizes, heel heights and widths than most shoe manufacturers, it 3D-prints the molds for every shoe ordered on demand.

After moving all production into its factory in 2016, the team has been able to slowly perfect the processes in place and gradually cut down on production time.

“Shoes have so many variables that can account for proper fit, and there are a trillion possible combinations for a shoe on our website,” she said. “Since we’ve been manufacturing ourselves, it’s all about pulling those threads together as efficiently as possible, and we finally feel like we’re where we want to be.”

Fox said that, of course, there’s always room for improvement, but at two-weeks guaranteed delivery time, Shoes of Prey feels confident enough to double down on marketing efforts and acquisitions. It recently hired Lizzie Francis, former CMO of Gilt Groupe, to head up its marketing department and refine the brand’s messaging and aesthetic.

“The result of our journey on the manufacturing side is actually a shift in branding, so we’re doing a big push on that front,” said Fox. “What’s most interesting is that fashion is only now warming up to the idea that technology is incredibly sexy and important, and we want to share that.”