This week’s things to know include how brands are responding to YouTube’s latest ad scandal, Facebook’s changing deals for Watch and more.

Advertisers react to YouTube’s latest ad controversy
YouTube is enmeshed in another ad scandal, with advertisers like Mars, Lidl and Adidas pulling their ads off the platform over videos of children there accompanied by obscene comments. British advertisers’ trade body ISBA even called top marketers and Google execs to a meeting about the issue.

Despite the fuss, ad buyers say most brands won’t reduce their spending on YouTube, and those that pull their ads are likely to return.

“Brands say they care [about brand safety], but do they really?” said an ad buyer from an agency holding company, requesting anonymity out of concern of irritating Google. “History says they’ll be back and spending more.”

As Stéphane Bérubé, L’Oréal’s chief marketing officer for Western Europe, put it: “At the end of the day, consumers are there.”

Facebook adjusts its Watch strategy
Three months after launching video-viewing tab Watch, Facebook is altering its deals for shows for the section.

“They want more sophisticated, premium content — which will cost more money,” said a Watch partner. “Based on what they’ve bought from us, it has the look and smell of TV-type formats, not Facebook-type formats.”

Agencies develop Amazon-focused offerings
Seeing an opportunity in Amazon’s size and the confusion surrounding the e-commerce giant, agencies and consultancies like Hinge Consulting and WPP-owned Marketplace Ignition are trying to convince brands they need one shop to handle everything for them on Amazon.

“We started [Hinge] because small companies and large brands can’t get the help or support they need to drive sales and optimize sales on Amazon,” said Hinge founder Fred Killingsworth.

One reason for this movement: Amazon’s tight grip on sales data. That’s where Hinge and others come in, using proprietary technology that examines factors like which factory sent out and processed orders to create sales projections for brands.

“Amazon thinks our services are quaint, that all of this is just the early-days confusion, and in the future, no one will need any help,” said Marketplace Ignition founder Eric Heller. “But in reality, it’s super complex.”

On the topic of Amazon …
At the Digiday Programmatic Media Summit in November, 90 percent of media executives Digiday surveyed said they believe Amazon could threaten the Facebook-Google duopoly. Subscribe to Digiday+ risk-free for the first 30 days to get more research like this. 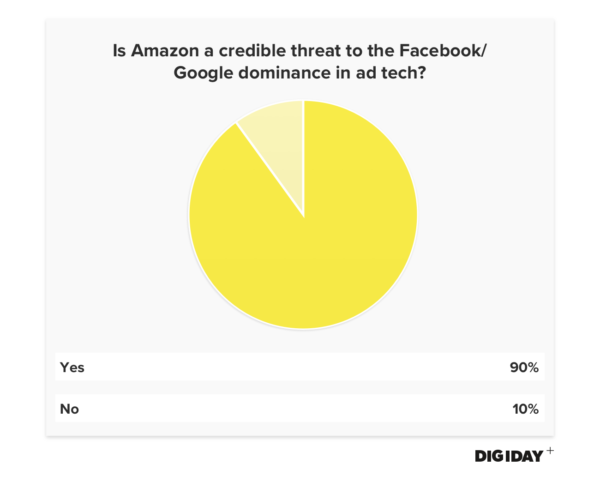 Snapchat unveils its redesign
After announcing a Snapchat redesign in its third-quarter earnings call in November, Snap debuted it this week. The major change: Separation of social content from media. A new Friends page appears to the left of the camera screen, and a new Discover page appears to the right.

The buyer view: “By aggregating all brand content into a separate experience, it is essentially putting pressure on all performing content to be high quality,” said Doug Rozen, chief digital and innovation officer at OMD. “This will accelerate the need for brands and agencies to address media and message at the same time.”

Publishers game the system to boost ad revenue
Publishers like to criticize ad tech vendors for shady programmatic practices. But it turns out publishers have their own dirty tricks — like ad refresh, bid pooling and paid traffic arbitrage — to bring in more ad revenue, as a head of programmatic at a midsize publisher reveals in the latest installment of our Confessions series.

What the industry can do about it: “It will come down to exchanges and SSPs making sure that they only allow quality inventory,” said this exec, “but most exchanges only care about volume today.”