‘The shine has definitely come off’: Digiday’s top takeaways from 2022 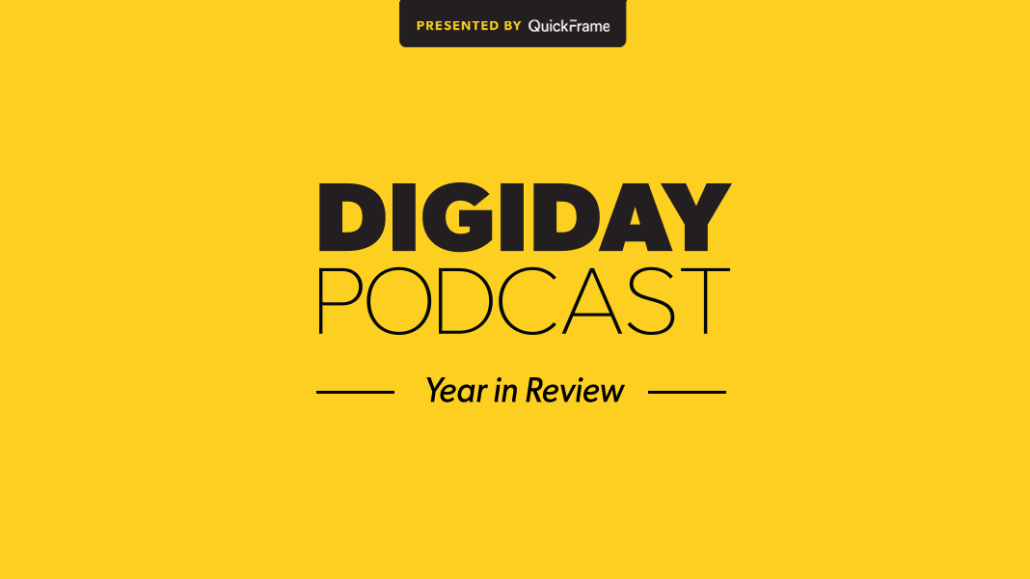 This year ended up looking quite different from what was predicted by Digiday’s editors at the beginning of 2022, but it made for a fascinating saga to follow.

In this final episode of the year of the Digiday Podcast, hear from some of our reporters and editors on the media and media buying beats chat about their top takeaways and trends from 2022, ranging from the struggling advertising market to the ongoing battle between publishers and platforms.

Below are highlights from the conversations, which have been lightly edited and condensed for clarity.

The culprit of platforms’ revenue decline is not solely the economy

Michael Bürgi, senior media buying editor: I think one big factor has been this rise of retail media networks and e-commerce as this new avenue of especially CPG advertisers, hawking their wares on these retail media network sites, where they feel they’re a little bit closer to the consumer, and therefore, could get better bang for their buck. It’s more of a performance driven kind of thing. At the same time, they are still trying to make sure that brand awareness and brand advertising goals are folded into this. So that it’s not just that short term gain you get from moving products 3 to 5% more, but also keeping people thinking about your brand in the long term. But I think that’s been a bit of a big effect this year.

Seb Joseph, senior news editor:  Thanks to Apple strangling mobile IDs, [which] are the backbone of how Facebook stood up its ad business. That’s kind of meant that there’s a big exodus in budgets there. Not necessarily because the advertising doesn’t work, just because advertisers don’t necessarily have a way of seeing that.

It’s all about direct response

Joseph: Any format that is going to show a demonstrative impact on sales or some sort of business objective is key. It always has been, but I think when there is that much more pressure on ad dollars to work harder, that stuff gets brought into sharp focus for marketers. I couldn’t say that there’s one specific or even a handful of specific [ad] formats [that buyers are prioritizing right now] because the buyers that we’re talking to all say that it’s a kaleidoscope of different ones. But it’s the ads that are linked to e-commerce. It’s the direct response ads, it’s the search ads that a lot of marketers and a lot of advertisers are leaning harder on both in Q4, but specifically going into next year, too.

Headwinds are leading to cost cutting across the industry

Joseph: The shine has definitely come off the platforms as revenue growth slows to a crawl. You’ve seen investor concerns about costs turn into demands for cuts. Meta is downsizing for the first time in its history, which I think is [about] 11,000 job cuts, 30% of its workforce. You’ve seen Google make similar moves. We’ve seen these platforms that have been essentially recession proof — for the longest time, nothing seemed to, regardless of what has happened with the economy or even in advertising, really been able to prevent these platforms from growing at a clip. I think you’re finally starting to see that come through now.

Sara Guaglione, senior media reporter: [Publishers are] feeling a lot more cost conscious than normal. Earlier this year, there was a big hiring boom. That’s definitely slowed down now to hiring freezes. There have been waves of layoffs this quarter as well, which we’ve covered in our Media Briefings and elsewhere. It seems that if there are teams out there that aren’t [directly] contributing to driving ad revenue, subscriptions [and] audience engagement, those teams are feeling more pressure than normal. Everyone seems very nervous, for good reason.

Bürgi: The irony here is that the agencies continue to act like there’s not much of a problem. And I don’t get it because all the signals and all the headlines you read are of layoffs and cutbacks. But if you look at the latest agency prognostications from Group M or Dentsu or IPG, they’re still looking at pretty solid growth for 2022 and a short downturn in 2023. But then really rebounding quickly by the end of 2023.

I don’t know if they’re in a state of denial, or if there’s something they know that we don’t know because they read the tea leaves so carefully, but to me, there’s just a little bit of a disconnect of what we hear and see elsewhere in the whole media communication circle, and the way agencies are looking at it.

Joseph: I guess one reason [agencies] would be so positive about it is that those businesses aren’t necessarily exposed to things like venture capital shifts, or a dampening e-commerce market in the way that the platforms are. When you talk to some of the independent analysts out there that cover this space, that’s one way they’ve tried to make sense of the fact that one side of this forecast is a lot more positive than the other.

And then you look at what Google and Facebook are putting out and it’s just a lot more conservative. They see this slowdown definitely is more [impactful to business] especially as the economic turmoil starts to really squeeze ad spending.

Publishers vs. platforms in the competition for ad dollars

Joseph: When it comes to publishers and the position they’re in to do well out of this sort of slowdown, potentially recession, particularly in terms of pitching themselves against the platforms, I think, to a degree, premium publishers are in a good position. Bloomberg has been doing some interesting things to wrestle back control over its ad tech stack. Seb [Tomich] over at The New York Times’ The Athletic, is well versed in this stuff and seems to have a good playbook on that. So I think [publishers] stand to benefit to a degree but only so much. The platforms are still strong, robust, advertising businesses, and they will figure out a way to prevent a lot of ad dollars from moving out from their businesses.

Guaglione: It also shows why publishers are investing a lot more into channels that they own and can control, especially with all of the craziness happening at Twitter. It seems like it’s more of a reason to push into initiatives that were started earlier this year and last year, like podcasts, newsletters — ways to work with advertisers in a controlled environment, [that’s] arguably more brand safe than some of the more unpredictable changes at these platforms that are happening, as we speak. There’s always a new update.