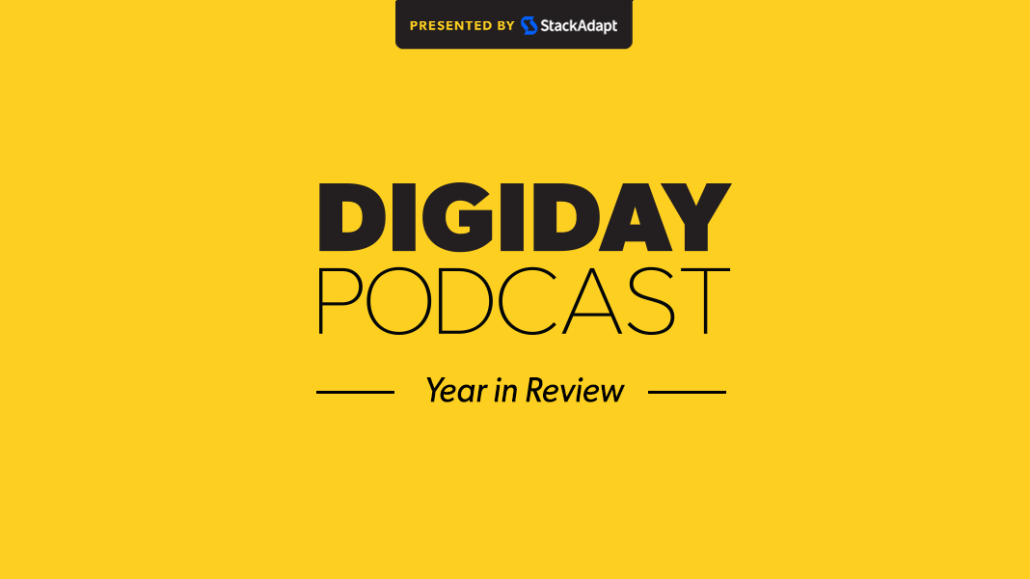 This year was not a quiet one for the industries that Digiday covers and the reporters who have had their ears close to the ground joined the Digiday Podcast to talk about the challenges and trends that they’ve been covering on their beats as well as what we’ll continue to closely watch in 2022, including cookie apocalypse preparedness, mitigating platforms’ influence on media buying, and how the return to office is an ever looming presence.

Use these time stamps to jump ahead to the specific industry conversations:

One of the things that we’ve been tracking really closely with the research panel this year has been cookie preparedness and kind of mindset among publishers. The main issue that lots of publishers are struggling with is figuring out how they’re going to try to make this situation work for them the [best] it possibly can. Publishers hated the cookie world, because it basically dis-intermediated them from the process in a major way and forced them to sort of take what they could get. But all of a sudden — and this doesn’t apply to all the publishers but to a certain select group — they can stand up and say with a straight face, ‘We have a large audience that we have some fairly interesting information and insights about. We have a good deal of insight into how they behave, not just on our properties, but elsewhere. If you want us to help you reach them, not only with messages, but maybe with the ability to buy your products directly or meet them in real life, we can help you do that.’

That’s a big change and a big opportunity for some of them, but I think there’s still not much certainty that this is going to be a big win for publishers, overall. Maybe a slight inch, but not a huge one. Most of the money is still going to go to Google and Facebook.

The challenges facing a modern newsroom

I’m going to be looking a lot more into the modern newsroom [and] employee activism, I think you could call it. We’ve seen so much activity with unions at media companies. Oftentimes, they’re being very outspoken about what they want from a workplace to feel safe, and happy in their work life balance. There’s a lot of push and pull between employees and management on that topic and I think that’s just going to continue to be, you know, a big area of focus for the industry, as companies try to figure out how to bring people back into the office — [or] if it’s even necessary to bring people back into the office and how to do it smoothly without having a lot of backlash, really, from unions, about health and safety measures and things like that.

Snapchat is making a big focus on AR enabled commerce, right? And the thing behind that is, and this came through from an interview we had with the GM of Europe recently, they believe that the more sales that happen in their app via AR enabled commerce, the easier it’s going to be for them to show advertisers how effective their ad dollars are, without the need for the use of an identifier, whether that’s from Apple or Google.

The long and short of it is, you’re starting to see how influential Apple now is in advertising. Since 2017, [Apple] has been steadily throttling the access advertisers have to its ecosystem, all in the name of privacy. So first, there was ITP, which reduced third-party cookie tracking in browsers. Now AT&T does the same on its devices, and in the future it’s looking like it’s going to do the same thing for IP addresses and email addresses. I think Apple’s role as a power broker in the industry nowadays is a big talking point.

Agencies remain heavily impacted by methods of the past

I think agencies already are accounting for [the coalescence of digital media and walled gardens] because they’ve felt the impact of this for a few years now. And I also think it’s why they’re getting into more consultative work that very intentionally gets away from the investment way of doing business that they’ve traditionally turned to.

And clients are now taking more in-house, but one factor in all of this that I observe, just from speaking to sources at all the holding company-owned media agency networks, is that most of the chief investment officers still come from a traditional media background. That colors and influences the way [in which they buy media] and what they buy on behalf of clients. I think that has more of an impact and an effect on where marketer dollars get spent than a lot of people realize.

https://digiday.com/?p=436096
Most Read
Trending in Strategizing for the Future
Digiday Top Stories