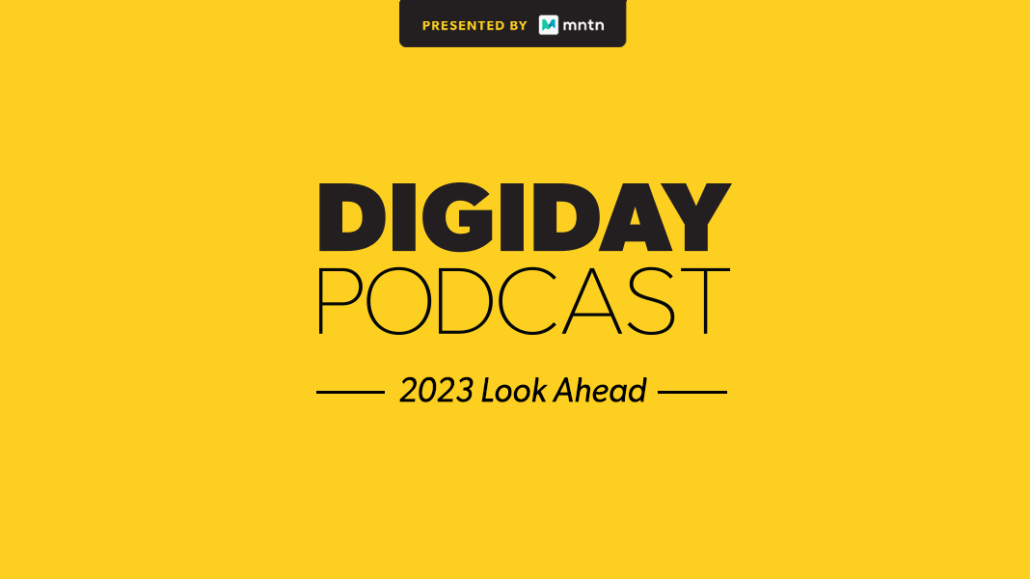 The media industry is heading into 2023 faced with a lot of uncertainty, thanks to a less than stellar 2022. But based on the conversations Digiday Podcast co-hosts Tim Peterson and Kayleigh Barber have had with media executives and brand-side leaders, the murky waters could be tricky to cross without taking on collateral damage. Hear from the editors on Digiday’s media beat about the top trends they’ll be following in the new year.

Cloudy forecasts for the coming year

Kayleigh Barber, media editor: So far, a lot of conversations I’ve had with CROs and CEOs on the media side have been really focused on not being able to expect what’s coming in a week’s time, let alone a full year. So we’ve been really sticking to that first six months time period when we’re talking about areas of focus or expectations for 2023. By and large, what I’m hearing is that there’s a lot of optimism for the second half of 2023, but the first half is going to be a little bit of a struggle. And I think it’s going to rely on a lot of lessons learned in 2020 to make sure they can pivot in a moment’s notice and cut costs if needed.

Tim Peterson, senior media editor: I’ve been talking recently with a lot of TV ad buyers and sellers about the upfront. And I look at that as something of a canary in the coal mine because they’re already starting to prepare a bit for what they expect the upfront next year to look like. And for anyone listening who’s not super in the weeds on the TV business, the upfront is basically this yearly cycle where over the summer, TV networks and advertisers and their agencies figure out how much money a brand or an agency is going to commit to spend with that TV network for the next year.

And these are big commitments. It’s similar to leasing a car or leasing a house. This isn’t an impulse purchase and so they’re already trying to figure out how much money [they’re] actually going to be willing to invest, especially because the upfront negotiations are going to be kicking off right around that time where things may be looking better, or things may have gotten so much worse at that point.

Cost cutting a little too deep

Peterson: On the cost cutting side of things, there’s the consideration of which costs can actually afford to be cut and not so much necessarily like, which teams can we cut or experimental budgets, but in streaming, one of the big stories at the moment is just how much money these companies — whether it’s Netflix or Disney or Paramount or NBC or Warner Brothers Discovery — have spent on programming for their streaming services and how they aren’t generating enough revenue to give that clear sense on when they can turn a profit. They’ve been dialing back their programming budgets [and] some of them aren’t buying [new programming at all]. Warner Brothers Discovery went on a pause over the summer around how much it was buying, or they’re looking to buy cheaper shows. And they’re not necessarily spending on so-called premium stuff.

But then that creates the question of ok, but if you just invest in lower quality stuff, can you expect the audience to be there? They’re going to recognize, “I’m paying $9 or $10 or $15 a month for the service and the stuff on it isn’t as good anymore.”

Barber: There was a lot of bloating that happened [in 2021] and a lot of chasing after revenue streams that might not have been as permanent. I’m thinking more about Web3 innovation or more of the crypto stuff. That was really great revenue to get when you could get it, but it wasn’t long term.

So I’m curious about the cohort of publishers that were getting really experimental, or were investing in specific teams that may add more overhead than revenue right now, if there’s going to be more layoffs in the coming year around that area. I think experimental budgets are not going to be as full in 2023, at least for the first half. That’s not solely directed at Web3. I think in other areas, like perhaps investing in VR, or more tech-oriented things.

I do think that the tried and true businesses might be the ones that publishers cling to.

Pivoting to short-form, vertical video and hoping the money will follow

Barber: Publishers are also embracing short-form vertical video because it is significantly cheaper to produce.

One of the criticisms that I’ve heard from another publisher for a piece I wrote about what publishers would like to see from platform platforms in 2023, was that the ad formats on Snapchat Discover aren’t as robust as other platforms. But for platforms like TikTok and YouTube Shorts and Reels, the less polished the piece of content, the better it tends to perform. The whole idea of having a personality-driven piece of content that was created in the app and edited using the tools that are native to the app still seems to be performing pretty well, as publishers more embrace these platforms. So I’m wondering if that will help save some costs if maybe there’s fewer projects going through the studio route, and more projects that are being filmed in an office.

Peterson: [Publishers’ success with short-form vertical video] all depends on how much revenue these publishers are able to get from those platforms. The revenue program for Shorts is launching in February and so there’s still going to be that time needed to assess how much revenue is going to be coming in to creators and publishers through Shorts. But then also, how reliable is that revenue going to be? Because it was only May 2022 when YouTube started running Shorts ads and selling those to advertisers. And so, to what extent are advertisers actually buying that stuff?

The challenge of how TikTok and YouTube Shorts calculate rev share, like TikTok Pulse is basically a post-roll program but not every video from a creator or a publisher qualifies for it. It’s just the top 4% of videos on the platform. So you could be a publisher or a creator who qualifies for revenue and have absolutely none of your videos actually get a rev share in a given month.