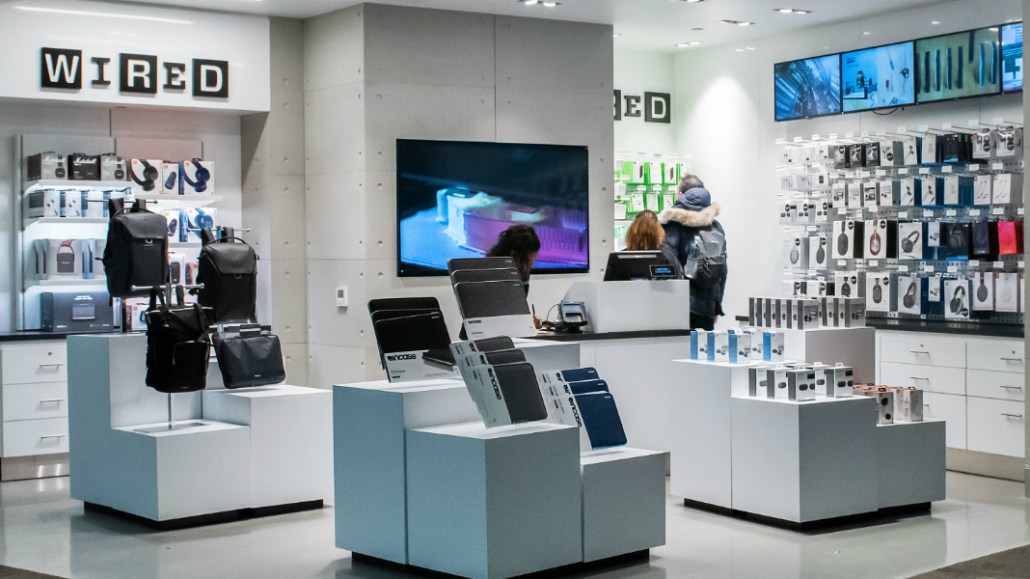 Wired is officially setting up shop at Newark Liberty International Airport, with a permanent Wired Store’s soft launch on Friday.

Like previous pop-up iterations of the Wired Store, the Newark venue will carry curated products like speakers and headphones (as found on the website’s Wired Recommends page), as well as products selected by the editorial staff from what licensing partner Stellar Partners typically carries in its airport technology stores. At its launch, the new store will feature 91 products, with 13, or 15%, selected from the Wired Recommends page. The price range for the products will be $15 to $350. Unlike Wired’s pop-ups, the Newark venue won’t include sponsored products, with advertisers paying for their display. Receipts on purchases from the Wired Store will include a discount code that shoppers can apply to a Wired.com subscription.

Wired is not the first publisher to put its name on an airport retail store. The New York Times has a bookstore and both CNN and Fox News have branded newsstand-type stores at a variety of airport locations. Wired’s managers have been strategizing on coming up with ways to achieve more revenue diversification, putting an emphasis on consumer-focused revenue streams, such as the website’s paywall that is only beginning its second year.

According to a company spokesperson, 20% of Wired’s revenue is derived from sources apart from advertising, including licensing, event sponsorship and affiliate and consumer sales.

“Obviously this is an experiment,” said Jahna Berry, Wired’s head of content operations. “It’s exciting to have Wired come to life this way, but we fully expect that this will continue to evolve.”

Berry said that both Wired’s editorial group and Condé Nast’s licensing team worked to create the Wired Store. Berry was tasked with orchestrating the editorial collaborations for the space, including working with a creative director to determine the decor, with product editors to select Wired Recommends items, and with the video team to display Wired videos on the TV screens. Condé Nast’s centralized licensing team selected Stellar Partners as the licensing company and negotiated relevant deals.

Stu Seltzer, CEO and founder of Seltzer Licensing Group, cited two revenue models that are commonly used in deals between airport retailers and the companies loaning their brand name to a store: royalties or flat fees. In a flat fee arrangement, the airport retailer gives the brand partner a set amount of money for each venue using its name; whereas a royalty deal provides the brand partner a percentage of the sales.

While Berry would not disclose the commission rate that Wired will make from the product sales, Seltzer said in his company’s airport retail licensing deals, commissions can range from 1% to 5% of retail sales.

The permanent Wired Store was originally slated to open in the spring of 2019, as Digiday reported, but Berry explained that many issues had to be worked out before the store could be opened, including construction factors, plus the challenges of abiding by Transportation Security Administration regulations about which products can be sold at an airport.

“The fact that [publisher-branded airport stores] have been in the market for many years tells me that [the model has] been successful,” said Seltzer, pointing to the CNN and Fox News newsstand stores that have been created in partnership with the Hudson Group. “If it doesn’t work, it’s one and done. After year one, they’ll take off your name and go to another name.”