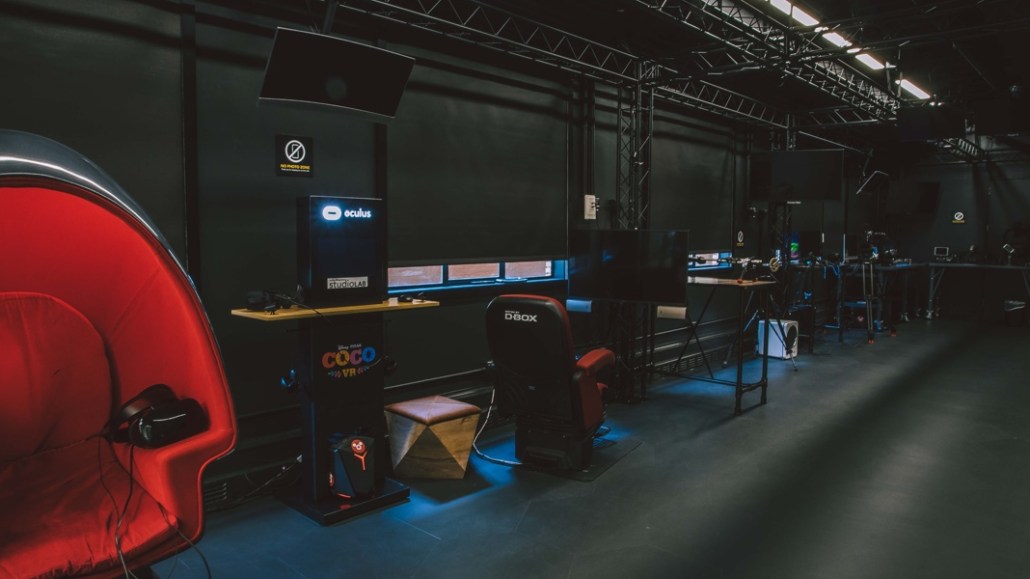 Within one of the oldest buildings at The Walt Disney Studios in Burbank, California, resides the entertainment giant’s future.

On the first floor of The Walt Disney Studios’ Animation building — two floors below Walt Disney’s old office — sits Disney’s StudioLab, the epicenter of the company’s investment in emerging technologies. Through a partnership with Accenture Interactive, Cisco and Hewlett Packard, the company officially opened its research-and-development outpost two months ago to dedicate a more prominent physical location for its work in virtual reality, augmented reality, artificial intelligence, etc.

“We used to have a lab. It was in [nearby] Glendale. It was not the same,” said Benjamin Havey, vp of the technology innovation group at The Walt Disney Studios, during a recent interview in the StudioLab’s office. “I was going into people’s offices with all this gear, saying ‘Hey, this is coming.’ Literally I had one pitch meeting where it was three hours of setup and 20 minutes of conversation.”

Now Havey and StudioLab’s 20-person team have a 3,500-square-foot office in the company’s most historic building. If its location is not indication enough of its importance to Disney, StudioLab has an advisory board comprised of executives from all five of Disney’s studios: Disney Live Action, Walt Disney Animation Studios, Pixar Animation Studios, Marvel Studios and Lucasfilm. Sean Bailey, president of motion picture production at The Walt Disney Studios, and The Walt Disney Studios CTO Jamie Voris serve as executive chairs of the board. The board meets quarterly to discuss how the company’s various divisions can use StudioLab and its technology, by letting filmmakers produce more content but more efficiently, for instance.

StudioLab holds tours for Disney’s employees and also hosts new employees going through the company’s orientation program. But at its heart, the space serves simultaneously as a showcase for filmmakers to see what newer technologies they can use on projects and as a work space where they can actually use them. That can be particularly important for getting established filmmakers comfortable with the new bells and whistles.

For example, StudioLab’s production room features all kinds of virtual reality equipment, including an egg-shaped chair designed for immersing oneself in a virtual reality experience. Cool as that may sound to an up-and-coming filmmaker, it could scare off someone who has been in the business for 40 years. To address that, the production room incorporates the manual equipment that film crews traditionally use on set, such as a tracking dolly, and has that equipment hooked up to its virtual reality hardware. As a result, a longtime director of photography working on an undisclosed project recently used StudioLab’s production room to learn how to capture footage in a virtual environment using equipment with which he was already familiar. “That’s really important for us. We want to introduce new things but also respect the traditions and leverage those skill sets,” said Havey.

The StudioLab’s lobby entrance immediately disabuses visitors of any notion that this is a traditional office, assuming the original sketches of classic Disney films hanging in the hallway didn’t already do that. An overhead projector casts moving images on the office’s door, echoing the company’s history in animation and underscoring the importance of technology to that history. Behind the door is StudioLab’s 3,500-square-foot office, which had belonged to Jerry Bruckheimer while he produced the “Pirates of the Caribbean” films.

Disney’s R&D outpost resembles the office of a next-generation entertainment startup, albeit a very well-funded one. It features the requisite kitchen that opens to a common area complete with couches, gaming equipment and an oversized flat-screen TV. Sharing a wall with the common area’s TV is a conference room that’s decked out as one might expect. There’s a long conference table, and two TVs on the wall that are designed for a different kind of video conference. Using technology from Cisco, the TVs have a camera embedded with computer vision technology that can zoom on whoever in the room is speaking, and Havey foresees filmmakers being able to use the video conferencing equipment to conduct remote walkthroughs of film sets.

In another example of how Disney envisions digitizing some of the production process, StudioLab’s conference room features physical storyboards from films like “Snow White and the Seven Dwarfs” along one wall and opposite that wall a touchscreen TV that can be used to create and view digital storyboards, which can also be accessed through a browser-based app.

StudioLab is not only designed to show how technology can be used to make films but also to market them. On one wall near the office’s entrance hangs a vertical OLED screen from LG that functions as a digital poster, swapping in animations for static images. Disney will be installing such a screen at the the El Capitan movie theater in Hollywood, which Disney often uses to host premieres of its animated films. Down the hall from the digital poster is, well, a dead end — until Havey turns on a projector that casts a 360-degree video of across three adjoining walls, including two doors.

The video is of the same quality that a person would see when viewing it within a VR headset, but importantly it does not require the VR headset to view it. “Not everybody wants to put a headset on, so this is actually bringing VR to the world,” said Havey. And StudioLab is bringing VR and other emerging technologies to the world of Disney.