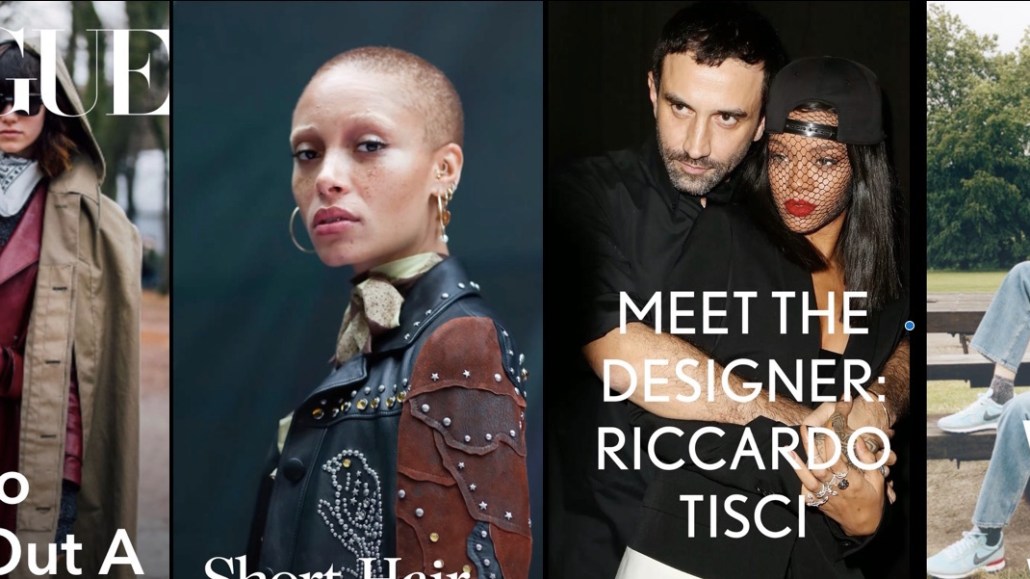 Every publisher is figuring out what to centralize. Condé Nast is breaking down some of the walls that previously existed between its international editorial teams in order to better create content for Vogue Paris and British Vogue, publications that traditionally have operated very autonomously.

That’s meant a centralized six-person Snapchat Discover team in London, with producers and interactive designers creating Snapchat content for Vogue Paris, which launched a month ago, and British Vogue, which debuts today. The team is led by Vogue International Snapchat editor Sarah Schijen.

Condé Nast is looking to balance the obvious cost benefits of centralization with desire for national edit teams to chart their own course. The local editorial teams in France and the U.K. will dictate what content runs in each of the three weekly Discover editions. They’ll submit the topics and stories they wish to cover, and the Snapchat team will then work up templates of editions to ensure each has a cohesive narrative, style and design that works for each market. The local editorial teams will get final approval on content. The aim is to plan editions two weeks in advance.

“This hub-and-spoke model will ensure each edition is a coherent capsule,” said Tom Conway, head of platform relationships at Condé Nast International Digital. “Editions will be adapted according to what the digital editors in each market produce, but instead of a stream of content, they’ll have a beginning, middle and end, so there is a cadence to each.” Naturally, all Vogue Paris content will be in French.

This is a big departure from the autonomous way the two markets have traditionally worked and in line with Condé Nast International’s wider editorial strategy to pool the efforts of its titles on a cross-country scale — a plan introduced after centralizing its digital editorial efforts last October. Although resources will be shared for overall style and formats, the different editions will be distinctive to each market.

“The challenge internally will be to keep the DNA of the local editorial expertise, while also benefiting from the new specialists we have brought in for the centralized team. It’s so much about communications and relationships and gaining trust with creative teams, so you can amplify what’s great rather than diluting something,” Conway said.

That’s not to say the two edit teams can’t learn from each other. Although Conway wouldn’t divulge the audience size of the Paris Discover channel, he said the French team’s Discover efforts have informed the British Vogue debut. Popular formats in France have been videos Vogue models film on their own hand-held devices along with product rundowns on topics like the best beauty products to buy from duty-free shops.

The first British Vogue edition features an exclusive interview with the title’s new editor-in-chief, Edward Enninful, along with styling tips, product reviews and photo-led Snaps. The aim is not to make the channel feel like a replica of the magazine but to use Discover analytics to monitor what content works best with audiences and adjust accordingly.

Economy is another reason Condé Nast created a central workflow for its Snapchat Discover output. Running a Discover channel requires substantial resources, with Snapchat specifying that teams typically need a minimum of five people. That’s a large outlay for just one platform, especially when the publisher doesn’t own it. But Discover remains a tantalizing environment for publishers looking to attract the coveted 13- to 24-year-old audience, one Condé Nast hopes it can make economically viable with this move. “Monetization is the big challenge on distributed platforms in general because you’re essentially building your audience on someone else’s land,” Conway said. “So our philosophy is to remain nimble and be where our audience is, but it needs to be economically viable.”

The publisher also hopes the rest of its editorial teams can learn from the specialist skills the Snapchat Discover team provides. “Part of the philosophy is to bring in these new skills and learn quickly how to produce mobile and video-first content for younger audiences,” Conway added. “We’re already learning a lot, like how to make the most of a vertical screen with our own sites. It’s starting to influence our editorial hub in general.”

Only the U.K. and France have Vogue Discover editions, but if it expands to other European markets, the Snapchat team will be used across all countries.

https://digiday.com/?p=247746
Most Read
Trending in Publishing in the Platform Era
Digiday Top Stories