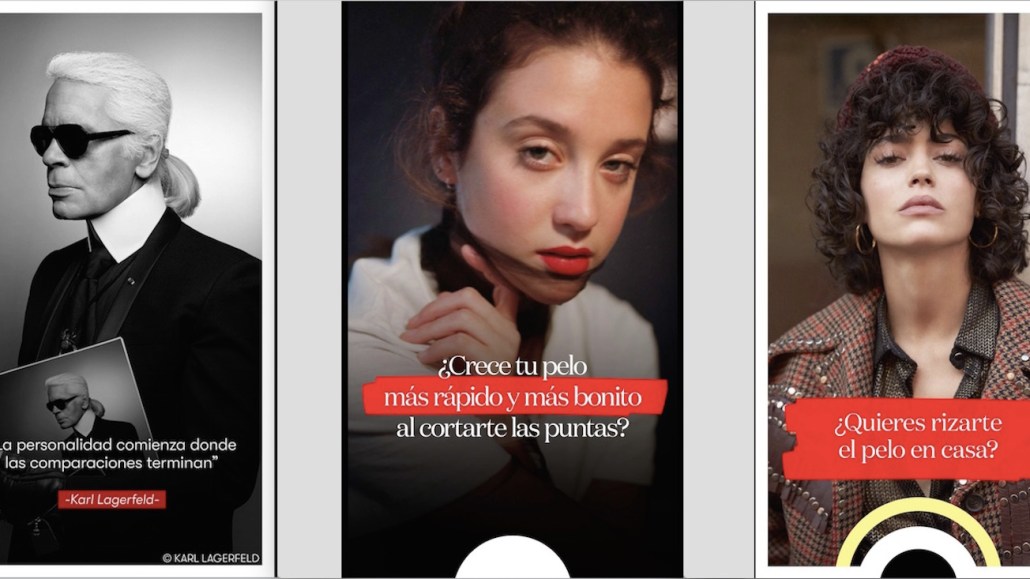 Over a year after Vogue International launched Snapchat Discover editions in France and the U.K., the title is rolling out a Spanish edition for Mexico and Spain. The move is part of Condé Nast International’s transition to structure around brands rather than countries.

The Vogue Snapchat Discover edition is created by a six-person, London-based team of Snapchat producers working with local Vogue editors. According to the publisher, when Vogue Paris became available outside of France in February, it saw an audience uptick in parts of West Africa, prompting the team to think about how local-language content on social media can drive audiences.

“The Vogue International hub is about expertise sharing; it’s not about centralizing content or efficiencies of scale but sharing the process,” said Sarah Schijen, Vogue Snapchat Discover editor. “It’s a hybrid model, truly localized, but sharing the brain and uniting the Vogue family under one social platform.”

Vogue en español will publish on Snapchat Discover each Friday, (Vogue publishes three weekly editions of Vogue Paris and British Vogue). Each Monday, the London Snapchat team discusses the week’s content with the Vogue teams in Mexico and Spain.

For its launch week, Vogue en español includes snaps of model Bella Hadid arriving to the Off White show at Paris Fashion Week, an article on six handbag styles in season, beauty content on rose tonic water, the benefits of regularly cutting hair and trends to watch out for in 2019. The edition published in Mexico has the same content as in Spain but with local nuances like changes in language. Only one out of the 13 snaps in this edition is used in the French and U.K. editions, but this will change depending on what’s relevant for the region.

According to Vogue, the French and U.K. channels currently reach a combined monthly audience over 11 million. Article dwell times are hitting three minutes. SimilarWeb says Snapchat users spent 49.5 minutes in the Snap app, on average per day. The publisher said it will take what it has learned from its other editions and adapt it for Vogue en español. Audiences like sharing screenshots of inspirational quotes from designers, leading it to up the number of designer profiles it publishers. As a topic beauty is particularly popular.

Evolving this will likely be crucial for growth for Vogue. “Successful publishers will continue leveraging production models predicated upon generating a lot of content for a lot of different audiences,” said Jenna Cummings, media director at agency VaynerMedia. “To date, most publishers that have done well with the requirements of relevant content at scale have been digitally born, rather than traditional powerhouses like Condé Nast International.”

Producing Discover content is resource-heavy and usually requires a dedicated five-person team, so having a central hub in London makes a lot of sense. Schijen said it was surprisingly easy getting local editors on board, partly because the relative newness of Snapchat as a platform meant it was clear that the publisher was trying to talk to younger audiences in a way that Vogue hadn’t before.

Over 80 percent of Vogue’s Snapchat audience is under 24 years old. Digital and print content is adapted for this younger audience, price points on featured items are lowered. Naturally, the Vogue team uses video and motion graphics. Content flows the other way too: An edition on the benefits of sleep was turned into an article on Vogue Paris.

During the redesign of Snapchat in February, which saw the Discover tab get a lot more crowded with influencer content, Vogue’s French and U.K. editions saw a dip in audience numbers, but those who continued to seek out the publisher were more loyal. According to the publisher, the edition completion rate increased, and on British Vogue article dwell time grew threefold.

Vogue makes the closed platform ecosystem of Snapchat work. “If you asked me in 2017, I would say I find it frustrating not having a relationship with the audience,” said Schijen, adding that the content has a positive bent. “Social media can have positive benefits, but there is also the dark side of aggressive and negative comments. Snapchat is safe; we have a duty of care to our audience.”

https://digiday.com/?p=305834
Most Read
Trending in Publishing in the Platform Era
Digiday Top Stories