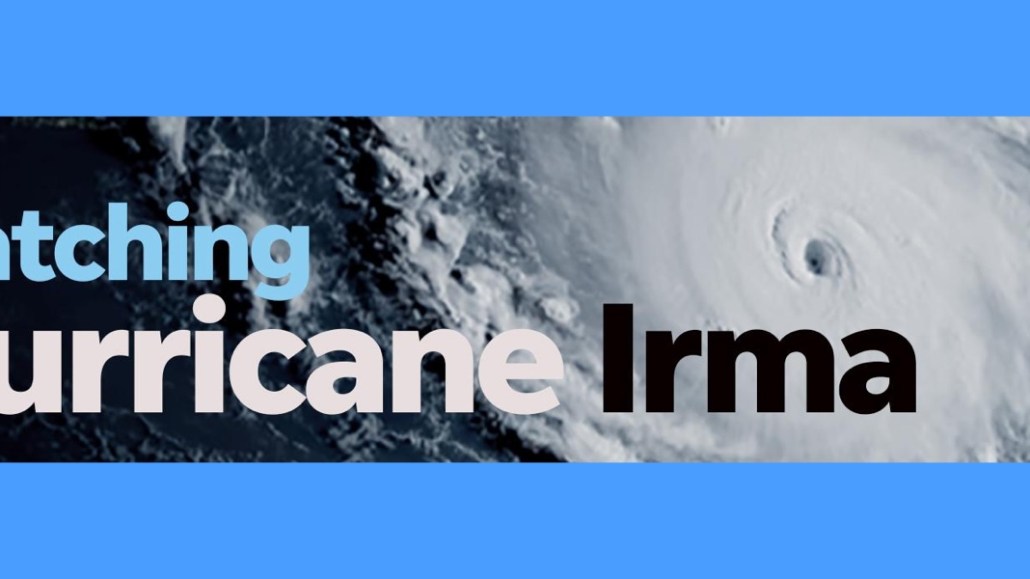 In its preparations for the arrival of Hurricane Irma last week, USA Today thinks it’s found a formula that it can use to keep its readers informed during future natural disasters.

Last week, it began sending out Watching Hurricane Irma, a kind of pop-up newsletter that collects and summarizes the reporting from USA Today reporters and local reporters working at the six Florida papers in the USA Today Network.

Rather than trying to build up an audience for the newsletter, USA Today decided to send it to people subscribed to Top Five, an automatically generated newsletter that rounds up top stories from a given market, in the Florida area. Watching Hurricane Irma went out to over 300,000 readers, most of them living in Florida — some snowbirds subscribed as well — with the newsletter getting an open rate over 50 percent during Irma’s worst days, according to the company. And even though few people take kindly to unsolicited emails, a survey of recipients conducted this week found 95 percent thought the newsletter was helpful.

“We’re looking at this as a model, moving forward,” said Liz Nelson, USA Today Network’s vp of strategic content development. “We hope we don’t have to use it very often.”

The original idea for Watching Hurricane Irma came from Cindy McCurry-Ross, the executive editor of the Fort Myers News-Press, and the Florida editor of the USA Today Network during a conference call among editors to figure out how to allocate reporting resources and bandwidth to cover Irma’s arrival and aftermath.

Using the reporting done by the local and national reporting teams in Florida, a staffer at USA Today’s headquarters in McLean, Virginia, wrote the editions of the newsletter, which were sent in the early evening.

“We wanted to free them up to do as much reporting as possible,” Nelson said.

Until recently, reporter-written email newsletters had not been an area of focus for USA Today. Despite the fact that the publisher sends a wide variety of email newsletters – it distributes over 500 different ones to 10.5 million subscribers every month – the overwhelming majority of the email newsletters sent to its audience were automated, like Top Five.

But staff-written newsletters have become a bigger area of focus at USA Today this year, partly after Nelson noticed the success of an editor-written newsletter created by USA Today Network paper the Reno Gazette-Journal. Today, staffers write or curate 10 percent of the newsletters USA Today sends, though Nelson said that percentage should increase in the coming months.

In recent years, Nelson and other colleagues at USA Today have been figuring out how to scale up ideas that originate at local titles. It’s made significant progress on that front with events, which the company expects to become a line item in company earnings eventually.

The newsletter was one of several adjustments the USA Today Network titles made during the storm. The six sites operating in markets that Irma affected, including the Naples Daily News, the Tallahassee Democrat and Pensacola News Journal, all turned their paywalls off during the week Irma passed through Florida as well.