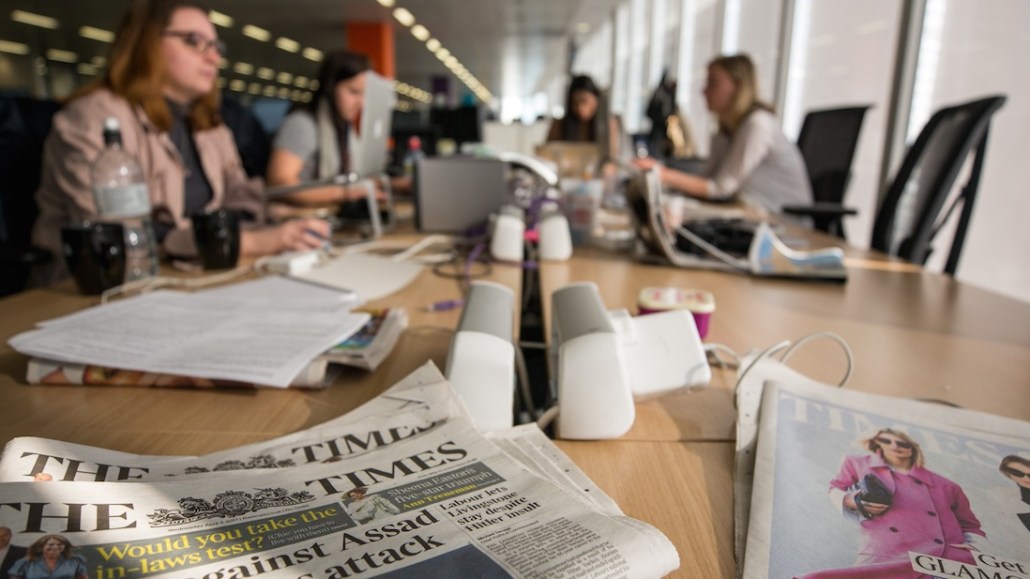 The Times has started a Facebook group dedicated to discussing Brexit topics, as part of plans to win over future subscribers.

The News UK-owned newspaper began the Facebook group last month after noticing a steady increase in comments on Brexit-related articles on its own sites. People are encouraged to share information from around the web in the group, which is called “52|48,” the percentage split of leave and remain voters. The goal is to introduce new readers to The Times content, while allowing people to post polls, videos, charts and snippets of reader comments from articles that sit behind the paywall.

Posts to the Facebook group that have had the most comments are this graphic on whether Scotland should break away from the U.K., with 29 comments, and this article on Europeans being blocked from taking jobs in the department running Brexit.

The Times’ team of five social media journalists take turns moderating and post to the group. The numbers are still tiny, with 150 members, but the caliber is high, and includes News UK’s political experts and editors.

“It’s about shortening the gap between those doing the reporting and the readers who we eventually want to make subscribers,” said Ben Whitelaw, head of audience development at The Times and The Sunday Times. For subscription publishers, like The Financial Times or Der Correspondent, offering access to journalists is increasingly becoming part of the package.

Since August, The Times has been experimenting with an open-access model, where in exchange for a name and email people can read two articles for free. It’s now topped 600,000 free signups, but figuring out how many will convert to subscribers is still being worked out. Whitelaw said it’s too soon to share details of how the group has led to signups.

“When before perhaps we wouldn’t have sought to engage those people [on Facebook] at all, now we are because we know we are an authority on politics and we have content people are interested in,” he added. “We need to reach out and find those guys.”

For the next six weeks, the focus is to drive numbers up while maintaining some quality of discussion. The Times is marketing the group within The Times’ comment threads and under articles about Brexit developments. Each time it does this a handful of people join the Facebook group.

The group has a couple of housekeeping rules to keep the discussion clean: People should post original content, evidence is needed to back up claims, and users are reminded to keep things civil. As publishers know too well, comment sections can attract trolls. For instance, the group description dissuades readers from using the terms “fake news” or “remoaner” — a derogatory term for someone who voted to remain. “We’ve seen these pejorative terms lead to a decline in the level of discussion.”

The group is closed, so new members must be approved, and The Times isn’t afraid of issuing warnings — which it has done several times — when discussions take an ugly turn.

Whitelaw said journalists have been more likely to get involved with this group than with comments on their own articles on The Times’ site, possibly because of the prospect of more exposure.

This is the first topic-specific Facebook group a News UK publication has started, but it’s likely to launch other groups in areas like fantasy football, from the expertise of its Dream Team journalists.

At the end of last year on The Times’ own platform it started moderating comments after they had been published, rather than before. This freed up more time for the audience development team to work on things like “52|48.” There was also an increase in the number of comments, as there was less of a time lag. Since January, eight out of the ten most-commented articles were about Brexit, this on Theresa May rejecting the EU’s demand for £50 billion ($63 million) and this on the resignation of the British representative to the EU, have both had comments in the thousands.

“We have a pretty well-behaved cohort of readers,” said Whitelaw. “Readers often don’t get enough credit for their insight.”