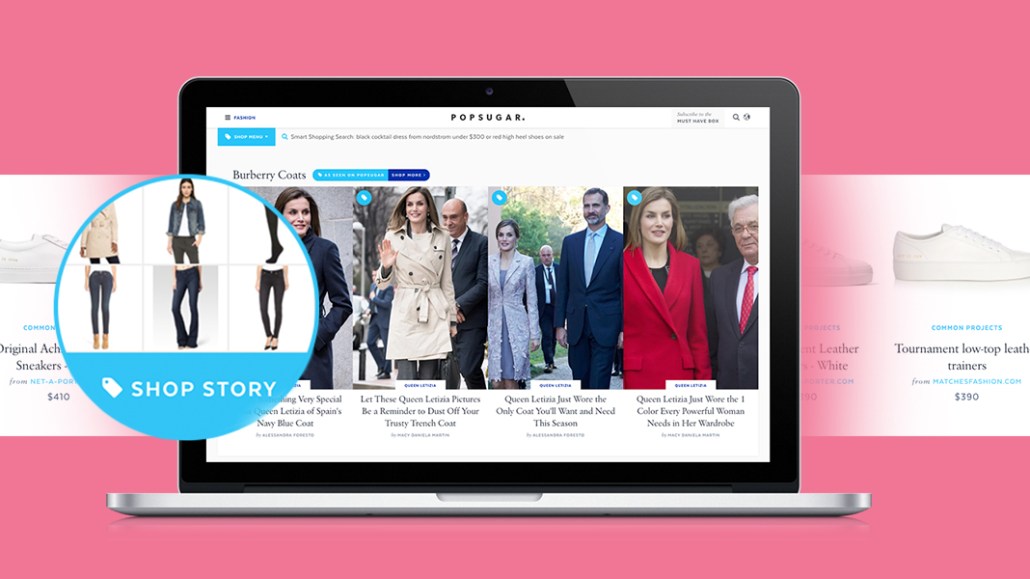 Publishers may all be moving toward commerce, but PopSugar plunged into it.

Last week, the fashion-focused publisher rolled out an article format called PopSugar Shop. When someone lands on one of these posts, like “The Biggest Designer Shoes of 2017,” a circle pops up in the lower-left corner of the browser window that invites the reader to peruse similar items, other products from the same brand or search for new ones — providing access to as many as 18 million products. Brian Sugar, PopSugar’s founder and CEO, called the new posts a “complete reimagination of content and commerce.”

While all of PopSugar’s 100 content creators have access to the tools to create these commerce posts, the company also has a team of four staffers dedicated to creating these posts using the new format.

In its first week of tests, the shoppable posts have driven 87 percent more clicks to retailers’ sites than previous commerce-focused articles, according to PopSugar (the company did not comment on conversions). Chris George, svp of product marketing and sales strategy at PopSugar, expects that number, along with the number of posts, to increase as the company learns what works best. The new format is intended to bridge the gap between reading and shopping, two activities that both retailers and publishers have struggled to bring closer together.

For now, PopSugar Shop articles comprise about 5 percent of the content published every day, focused on beauty, fashion and home. George said the overall share will grow as the publisher discovers what works best and expand into other PopSugar editorial categories, including fitness, travel and celebrity. 20,000 archived commerce posts were converted to this new format, which will help George and his team optimize it further.

“You need commerce functionality to find what you’re looking for,” George said. He noted that while editorial content often inspires subsequent purchases, often the items found during those sessions wind up orphaned in random browser tabs, never to be revisited. “There’s a lot of dead-end experiences,” George said. PopSugar is betting that, if it can recreate that shopping experience on its own properties, it can drive more clicks to retailers, and more conversions.

As a private company, PopSugar wouldn’t say how much revenue it makes from commerce-based content.

The ingredient that allows PopSugar Shop to operate at the scale it does is ShopStyle, a shopping-based search engine PopSugar used to own. (It sold ShopStyle for an undisclosed price to the Rakuten-owned Ebates in February.) Instead of having to find deals or retailers for items they want to recommend to readers, PopSugar staffers can search for items on ShopStyle directly from its content-management system. If an item is available from a number of different retailers, like a pair of Vans sneakers, ShopStyle will choose a retailer automatically, trying to pick the one most likely to lead to a conversion.