At a time when publishers and platforms can’t seem to swim in their own lanes, PlayBuzz is a notable exception.

PlayBuzz took a page from other viral quiz and listicle factories such as BuzzFeed and ViralNova to become one of the most-shared sites on Facebook. The brainchild of Shaul Olmert (the son of former Israeli prime minister Ehud Olmert), PlayBuzz has grown to top 20 million monthly unique visitors in under a year, according to comScore. In November, defying Facebook’s crackdown on clickbait, it became the most-shared English-language site on the social network, according to social media analytics company NewsWhip, overtaking The Huffington Post and BuzzFeed.

It has done this largely on the backs of others. Only 2 percent of PlayBuzz’s content is created in-house. Most of the quizzes, polls and listicles are created by individual bloggers and big-name media companies (AOL, MTV, Yahoo) alike. These publishers, big and small, avail themselves of PlayBuzz’s free templates to churn out time-wasters like Which Lady Gaga Outfit are You? and Can You Pass a Lie Detector Test? 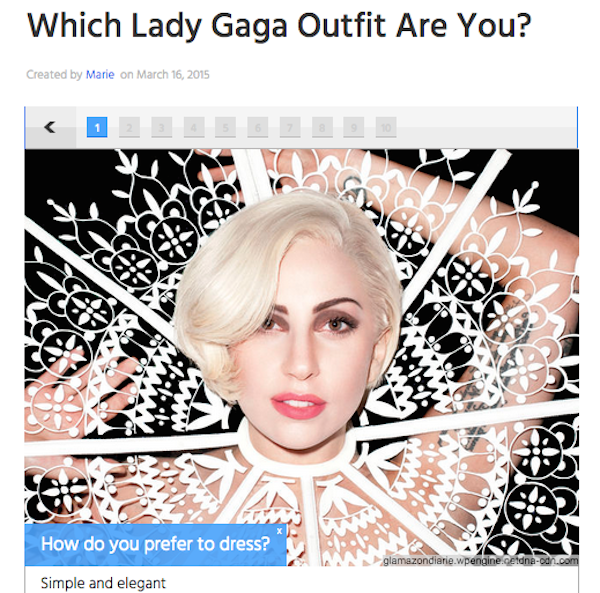 Other tech platforms from Facebook to Tumblr have become enamored with the idea of building content units staffed by reputable journalists to deepen their relationship with users. That makes PlayBuzz notable in its decision to stay firmly rooted in the platform camp.

“We’re first and foremost a platform,” Olmert said. “We’re not a content company. It’s not our DNA. We work with so many publishers so closely. They’re real content people. It’s very hard to do that as an afterthought.”

What PlayBuzz does have is a small team that trains publishers in using its platform. “I call it the flying circus,” Olmert said. “We have our content team flying all over the world, to New York to San Francisco, to L.A., London, working with the edit staff.”

Like YouTube, PlayBuzz prefers to leave the editorial work to the content experts. The idea is that as more publishers use PlayBuzz’s platform, the more it will catch on with other publishers, as publishers can borrow others’ content (unless the creator opts to publish it exclusively on their own sites).

“Publishers have learned to see the value in that,” Olmert said. “They get promotion, and the other site gets free content.”

Platforms have treaded into publisher territory with mixed success. LinkedIn has had a committed and growing publishing effort, helped by the fact that edit is integrated with product. But Facebook and Tumblr have retreated from their original editorial-creation efforts. As a committed platform, PlayBuzz sees its value in keeping its creators happy. To that end, it’s giving publishers access to a dashboard that will show them how their listicles and polls are performing.

PlayBuzz is adding features to the system, like additional languages and the ability to share on platforms like Vine and Instagram. And it works with publishers to create content that’s exclusive to them, upon request. “We’re now beginning to support our publishing partners to a better extent,” Olmert said.

He is also exploring ways to share revenue with its amateur creators who, unlike media companies who sell advertising, have no way to financially benefit from the quizzes and lists they create.

“I view it as a way to be fair and make the creators whole,” Olmert said. “Some have created hundreds of items. It only makes sense that since they’re creating so much value, we should compensate them, à la amateurs on YouTube.”

Nor is PlayBuzz resistant to the call of native advertising. Seeing the popularity of his platform with brands who use it to create content for their own sites, Olmert is actively looking at charging marketers to extend that reach. “It’s early days for us, but we’re stepping into it now,” Olmert said. “The potential is enormous, so I feel like it’s bound to happen.”

Any platform that’s optimized to a single social network has to be concerned about what would happen if Facebook changed its algorithm. Having its content created by and spread across so many host sites, PlayBuzz can attract a wide audience of new readers each month, though, said Liam Corcoran, social media editor at NewsWhip.

PlayBuzz will face an increasingly competitive market for native advertising, though. “Selling digital advertising is pretty cut-throat,” news analyst Ken Doctor pointed out. “The expectations around the high level of excellence in creation and tracking of metrics, all of that is getting more and more sophisticated.”