Pinterest is looking to help its users get one step closer to purchasing with a new feature that automatically saves shoppable product pins and even notifies users of price changes.

Starting today, the Shopping List feature will automatically save user product pins in one place, making it easier for users to come back and shop for those items. Users will also be shown shipping costs, reviews, and notified when a saved product pin has a price drop. The new feature will roll out this month to all users in the U.S. and the U.K. Shopping Lists will be available later this year in Australia, Canada, France, and Germany.

Shoppable pins come from product catalogues uploaded by verified retailers and merchants — an option that first became available in March 2019. The offering took off this year, and the number of global catalogue uploads was up 14 times in the last 12 months, CEO Ben Silbermann said in the company’s first-quarter 2021 earnings call for investors. Pinterest declined to share specific numbers on how many catalogues had been uploaded.

Product pricing pulls from retailer websites, although brands are able to turn off site-scraping. Merchants can also allow Pinterest to directly connect with a database of merchant products that is updated every 24 hours.

“We’ve connected the top of the funnel to the middle funnel, and now want to help pinners compare and evaluate the products they’ve discovered,” said Dan Lurie, Pinterest’s head of shopping products. 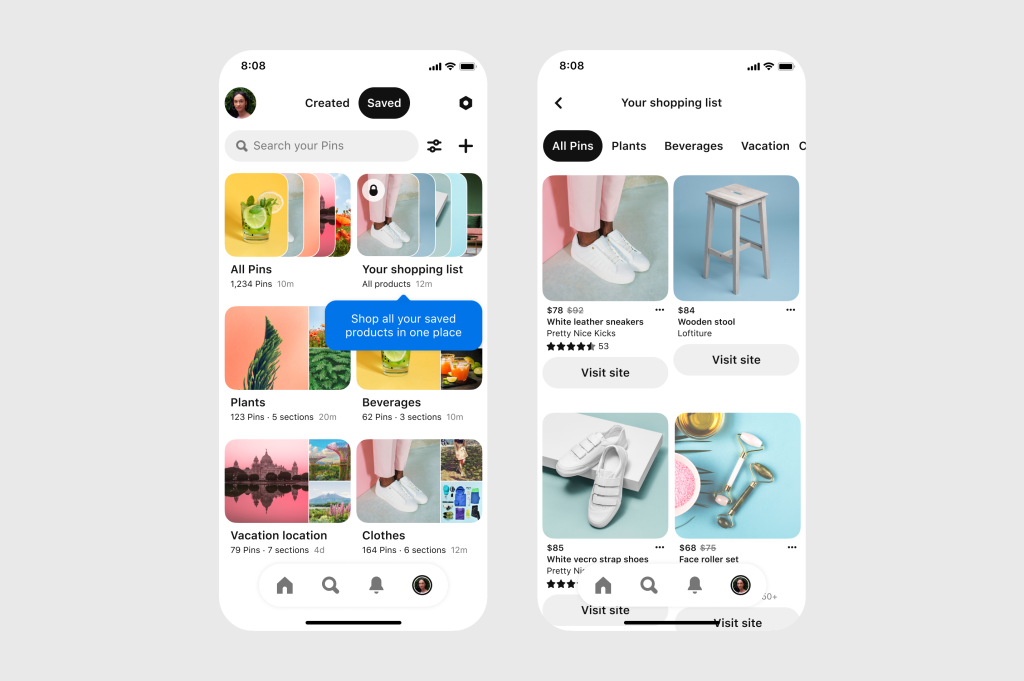 Image description –
A view of the Shopping List feature

The Shopping Lists will be the latest in a slew of features Pinterest has launched this year aimed at driving commerce through Pinterest, such as a shop tab that appears in search, virtual makeup try-ons, and a three-day event that tested out live stream shopping.

Pinterest is striking when the iron is hot: social commerce sales in the U.S. are forecasted to reach $36 billion this year, up from $26.7 billion in 2020, and $19.2 billion in 2019, according to a January report by eMarketer.

And Pinterest is seen as a fruitful opportunity for retailers because of the amount in-depth data it provides them, agencies said.

“While investment on Pinterest makes up a fraction of our overall platform investment — Pinterest Shopping itself garners the most tactical spend in-platform,” wrote Stef Smith, head of paid social at Dentsu, in an email.

She added that Pinterest now also allows for reporting on commerce in a way that Facebook and Instagram do not — specifically, the breakout of view versus click metrics. “For clients who set goals based on revenue tied to views and who lack directional/historical data, this differentiator will — at least in the short term — be an important consideration.”

Katya Constantine, CEO of DigiShopGirl, said her clients are also happy with the shopping metrics. “They like that Pinterest has enhanced its reporting so brands are able to see performance of the tagging for both organic and paid pins, which has been a great value add.”

Still, there are skeptics.

Pinterest’s biggest weakness is that it has a smaller user base than Facebook and Instagram, said Nazmul Islam, an analyst at eMarketer. As the site vies for a larger piece of the commerce pie, it could be constrained by that.

The platform must also reckon with advertisers’ long-standing skepticism of its ability to drive social commerce. “This isn’t a new conversation,” said Sucharita Kodali, vp and principal analyst at Forrester. “Pinterest has long had other features and tried to be shoppable for a while, but they are a discovery engine and an advertising destination.”

Pinterest claimed that the new feature is something users have asked for and is a logical next step for how people use the site. “They come for inspiration, or directions on how to plan or make something, and usually need to compare products before deciding what works for them,” Lurie said.