‘One debt companies are building up is burnout’: Ad tech embraces the four-day working week 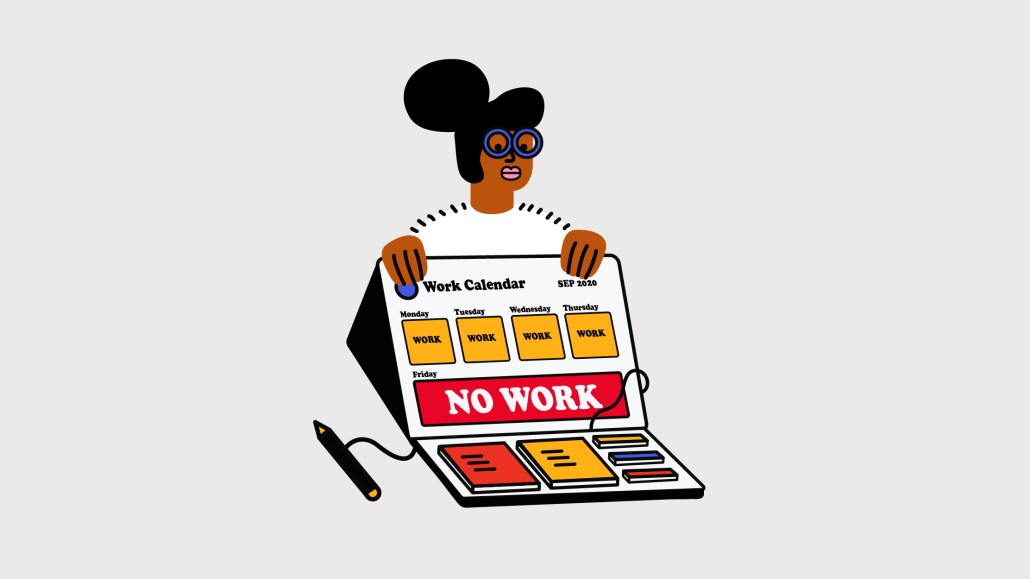 Like most keen runners, Matt had to forget about the canceled marathons he signed up to this year. A few Fridays ago, he set out to run his own. Halfway through, he thought, “I always said someday I’d run 50 kilometers,” before powering through to smash that milestone.

Matt works on the engineering team at ad-tech company Polar, which since September, is giving its 30 employees Fridays off indefinitely to explore their own passions and hobbies — The Someday Experiment — after a successful trial of a four-day week in May.

“The Someday Experiment isn’t a three-day weekend. It’s about trying to create space to invest in something that’s important to you,” said Polar CEO Kunal Gupta, who is using his Fridays to write a book on meditation, (and guides a zen two-minute Zoom meditation during press interviews).

The four-day working week has been a trend before the pandemic — which, as we all know, has been the great accelerator. Earlier champions are Microsoft Japan and design tech company Normally. Basecamp and other tech companies have Fridays off during the summer. This adoption was spurred by a convergence of trends: tech advancements led to more constant contact, a growing understanding of attention and what fuels productivity and placing higher importance on a work-life balance.

In May, The Telegraph was among those who implemented a four-day week for non-editorial staff in line with pay reductions. While this is commercially motivated, other companies — such as Ireland-based developer 3D Issue and U.K. magazine publisher and events organizer Target Publishing — made similar moves and noticed no negative impacts, so continued with salaries restored.

The four-day week is very ad tech. Or at least, very tech. High-profit tech companies are au fait with redesigning working processes, from communications tools to remote work and annual retreats. Silicon Valley’s way is to “take something fraught or complicated, utterly revolutionize it through smarts, force of will and an unironic ‘mission’ to change the world and then figure out whether it was a good idea,” wrote The Times’ of London’s West Coast correspondent Danny Fortson.

Making the switch to a four-day week isn’t a smooth process: Polar reduced its meeting times to 30 minutes, shaved Slack channels from 200 to 30 and halved the number of sent Slack messages. Ongoing employee surveys and interviews will check it staff stay as happy and productive as they were in May.

While it’s hard to attribute sales or cost-savings directly to a four-day week, it feeds into the amorphous view of culture — harder than ever to foster when companies aren’t used to pandemic-induced remote work. Polar has grown revenue 50% year-on-year and profits are up. This buoyancy allows it to undertake a four-day week experiment and could also be because of it. Now, the company has more discipline in which clients it takes on, focussing on larger agencies after seeing that revenue from smaller agency clients is less viable.

Still, a knock on the four-day week’s notion is that it’s suited to knowledge-based rather than service-based industries, critics say it plays to “professional elitism” (a bus driver doesn’t have the luxury for this experiment, for instance).

For example, when Buffer, an 88 person remote-first company with staffers across the globe, implemented a four-day working week from June, the only team that it didn’t work for is the customer services team, what it calls its Advocacy Team. For Buffer, this is “an exception to the idea that fewer hours could result in similar productivity.” The company is working out how they can also make this shift longer-term by reducing the number of tickets that come through by giving customers what they need.

“When covid started … the response to surveys, and anecdotally, found that folks were tired,” said Hailley Griffis, head of public relations at Buffer. “Our CEO’s goal was to get Buffer through [the pandemic] unscathed, one debt companies are building up is burnout,” she said. And surveys showed the four-day week improved staff autonomy, lowered stress levels and increased happiness.

Earlier on, opting for ultimate flexibility, Buffer let teams choose what day off day they wanted. The company was split into Wednesday or Friday off. The outshot was there were only three guaranteed days of crossover, which, when also dealing with multiple time zones, became untenable. Now it’s settled on Fridays off.

“We adjusted goals, expectations, deadlines and meetings,” said Griffis. “The biggest thing is changing expectations, otherwise people work late and long hours. For us the purpose is to avoid burnout, it will feel like a crunch if the expectations don’t change.”

Other critics question how hard people must be working if they can cut 20% of their working time. Proponents of the move argue that the perception people give 20% of their value and time is flawed, particularly on a Friday, nicely illustrated by going into most media or marketing companies on a Friday after lunch.

For tech companies, the four-day week incites laser focus and shrewd prioritization. Whether it will take hold outside of tech circles remains to be seen.

“If progressive companies take a gamble and offer a four-day week they will have the pick of talent,” said Ken Charman, chief executive of digital reward system provider uFlexReward. “Others will have to follow. “But global competition could upset that. That depends on who you are competing with. In China, the norm is working six days a week [as in the U.K. and U.S. 100 years ago], or are you competing with the person next to you on the train.”