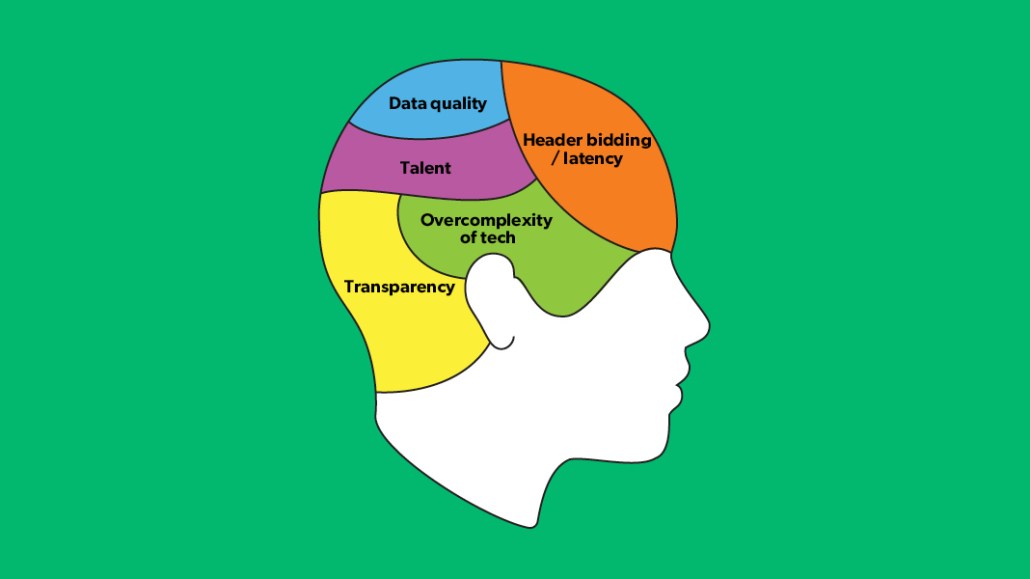 Publishers, brands, agencies and tech vendors from across Europe gathered this week near Dublin to discuss some of the biggest issues facing programmatic advertising. Chief among them: How to solve transparency issues in digital advertising, know where and how ads are appearing and fix the programmatic talent crunch.

We’ve broken out some of the main concerns that were talked about throughout the week, under condition of anonymity, to give a flavor of what execs are truly thinking, across the digital ad industry.

Transparency must improve:
“Programmatic specialists come at such a premium because of the talent gap, so it is the major ad tech companies swallowing the talent, and it isn’t in their interest to be transparent.”

“Collaboration is the key word. We sell the dream for the fear that things won’t get signed off. But we need to all be better at being honest with all parties — being honest with tech, clients and partners instead of just rushing to get a deal done.”

“Transparency is a broad term, but it boils down to trust. And that feels very broken at the moment.”

“Marketing hasn’t caught up with the technology. Some brand managers don’t know what they want.”

“Ad tech tax isn’t the main issue, the bigger issue is that so much of the buy is still blind. I’m tired of seeing ‘agency special network’ to inform me where the ads are going. The questions to ask around transparency are: What did I buy, where did I buy it from, in what editorial context was it in, and what actual price did I pay?”

“What’s frustrating is that companies that play by the rules and don’t get involved in murky practices will still have to spend a lot of money to meet the new Euro regulations, while the dodgy ones won’t.”

“We recently ran a test on a big publisher’s domain and found that 50 percent of the ads weren’t appearing on the site we thought but on that publisher’s subsidiaries. That’s fine if they’re vetted; the point is, we aren’t told. Why?”

“If the agencies work with the clients and have a united front, the more you can have open communication about vendors you have and the more powerful and aligned you can be together.”

Talent crunch:
“We are looking for a rare breed: an extrovert who can communicate with the company as well as really understand everything that goes on under the hood. That niche is getting smaller.”

“It’s hard to find traders, and we can’t go after our clients for talent, so the wider we grow, the smaller the talent pool.”

“Many companies don’t want to make that transition because they have to keep the day-to-day budgets running.”

“The big difference between the finance and the advertising industry is that the ad industry has more creativity and vitality, but that’s starting to get cut out.”

“People safeguard their knowledge, making things seem more complicated than they are to make themselves seem more valuable, making it seem more arcane could be making us suffer a lot.”

“Most companies don’t understand they need to hire people to share the knowledge.”

“Loyalty doesn’t really exist in the market. The amount of churn has escalated.”

“Payment terms and structures need to change. The culture has changed, so the percentage commission needs to. Should we pay ops more than sales?”

Header bidding:
“DSPs and buyers aren’t being educated on header bidding. As publishers, you need to be cognizant of the effect on your customers.”

“We’re exposed as publishers. DFP is a black box.”

“I see direct investment as a declining form of media spend. IOs, the world isn’t moving there. If your goal is to turn yield up, you have to look to header bidding and server-side integrations.”

“I don’t think the ad server will be here. Programmatic trading is being commoditized.”

“Header bidding is a hack. Why are we talking about this so much?”