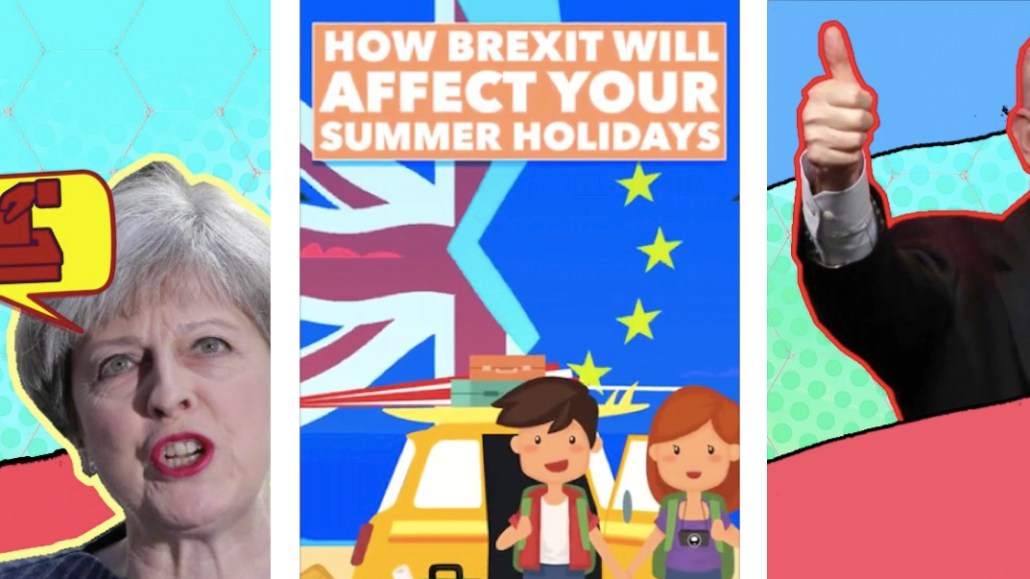 With such a short lead-up to the U.K.’s snap election on June 8, The Sun is swapping some of its celebrity-heavy Snapchat Discover content for more political coverage to get information to young voters quickly.

Since the election was announced on April 18, The Sun has created up to three snaps a week on the election. These include the top things to know about the main political parties, how to register to vote, a poll asking if people plan to vote, content about whether millennials will decide the election (featuring influencers like Zoella who have been tweeting about it) and Brexit’s impact on summer holidays. The publisher plans to go deeper on election content when each political party publishes its manifesto.

“When the election was called, we immediately thought we need to get more young people voting,” said Sophie Tighe, the publisher’s Snapchat editor, citing Ipsos Mori research that found 43 percent of voters aged 18 to 24 voted in the U.K.’s 2015 general election. “We want them to be confident they can make an informed decision. Our goal is to demystify political jargon and highlight issues. We know our audience wants to be informed and entertained.”

U.K. Snapchat Discover partner Sky News has also covered the election, although these snaps are usually linked to the day’s news and have a light tone. One recent example occurred when Tim Farron, Liberal Democrat party leader, fell on the party’s campaign bus, live on Sky News. Compared to other Discover partners available in the U.K., The Sun takes a domestic focus, rather than a global view.

The Sun plans to use more polls in Discover to inform the content it will produce. It has already polled users on whether they plan to vote, finding that 9 percent don’t plan on it, while 39 percent said they weren’t over 18 so they couldn’t vote legally. “That said something interesting,” Tighe said. “How can you be engaged in politics without being able to vote? Just because you are 17 years old, it doesn’t mean you don’t care.”

Viewers are sharing concerns with The Sun’s Discover team, with one asking whether rising taxes are a bad thing. As a result, Tighe is planning an explainer on how taxes are spent. Others are interested in rising university fees, but also which parties are offering the best opportunities after university. Readers are equally curious about the impacts on the national health service and the police service. On the other hand, the publisher will focus less on topics like each politician’s take on pensions.

The Sun was unable to disclose how many people it reaches through Discover because of its terms with the platform. But Tighe said the number of shares election coverage has gotten has encouraged the publisher. She estimates the snap detailing how people can register to vote has had five times the shares as its other coverage, although she wouldn’t share exact numbers.

The Sun has previously dabbled in political coverage on Discover: Its snap on Donald Trump winning the U.S. presidential election was the most shared snap of the month. In France, Le Monde has found Discover a successful route for political news, especially for educating users on how to spot fake news.

The Sun, which launched its Discover channel in April 2016, has a team of nine editors, writers and graphic designers creating daily editions, which go live at 7 a.m. GMT. None of the editions have opened with election coverage. Instead, they lead with U.K. celebrity news, like pictures of former model Katie Price’s husband. Tighe imagines that as the election draws nearer, The Sun will eventually publish a full edition dedicated to the election.

“We want to look at politics through the prism of the every day,” she said. “Politics is not boring, but in this 24-hour news cycle it becomes like white noise.”

Image: Courtesy of The Sun via Snapchat.

https://digiday.com/?p=235727
Most Read
Trending in Publishing in the Platform Era
Digiday Top Stories