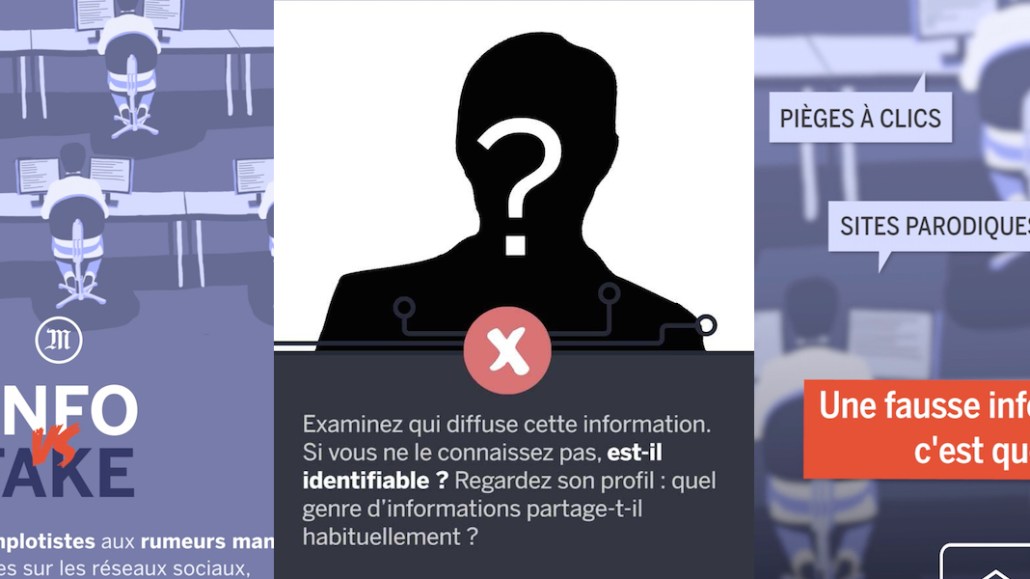 With France’s national elections around the corner, Le Monde is turning to Snapchat Discover for its battle against fake news.

The publisher has a 13-person fact-checking team, Les Décodeurs, which focuses on hard-nosed debunking — both stories and specific websites — on its own properties, Facebook and Twitter. On Snapchat, the approach is more educational, with Le Monde’s Discover team doing explainers and guides on how not to be fooled by fake news.

“The idea is not to point to one fake-news story after another, as there is so much of it, but to educate our audience to have good reflexes when they stumble on suspicious information,” said Le Monde’s Snapchat Discover editor Jean-Guillaume Santi.

Le Monde has been publishing to Snapchat Discover for six months and has posted 200 editions in that time. The seven-person Snapchat Discover team creates a new edition each day (seven days a week), some of which will consist of 12 snaps telling one, continuous narrative, and others a mix of information.

Some editions have focused entirely on snaps that show users how to check whether an image they have come across is credible or a hoax, and suggesting tools they can use to check.

Santi wouldn’t reveal the size of the Snapchat audience, due to its agreement with the platform, but said that readers regularly ask questions via Snapchat. “When Trump was elected, we received a lot of inquires about various conspiracy theories, and sometimes we get questions that ask us if certain facts or stories are true,” added Santi.

The team will often select the main questions, and repackage them into an edition mentioning the names of the people that posed them, along with Le Monde’s answers to the questions. “If the answer is really obvious, we will just answer them directly in the chatroom; we like to have a dialogue,” he added.

Some snaps have been designed to look like WhatsApp messages. A statement made by a political candidate that is false, will be explained in the message. For example, National Front party leader Marine Le Pen claimed that there are 7 million unemployed people in France. The Le Monde team posts an “It’s false” reply and then gives details on the real figures, which are closer to 3.5 million. Another one, also in WhatsApp-design snaps, gives details on why a statement from political candidate Emmanuel Macron relating to the closure of prisons, is false.

Snapchat Discover content often veers into the Kardashian territory. But for Le Monde, political content has started performing more strongly on Discover than it was a few months ago, which Santi attributes to the fact that the elections are ever sooner.

Information relating to campaigns will be made into fun infographics or quizzes, to help the readers understand the differences between the candidates and what each of them proposes. Snaps will also be made around specific political jargon, like the word “secularism.”

Another successful format presents the terms of a debate and then Snapchat users are encouraged to send their opinions in video snaps. Le Monde’s team then repackages them and releases them a few days later.