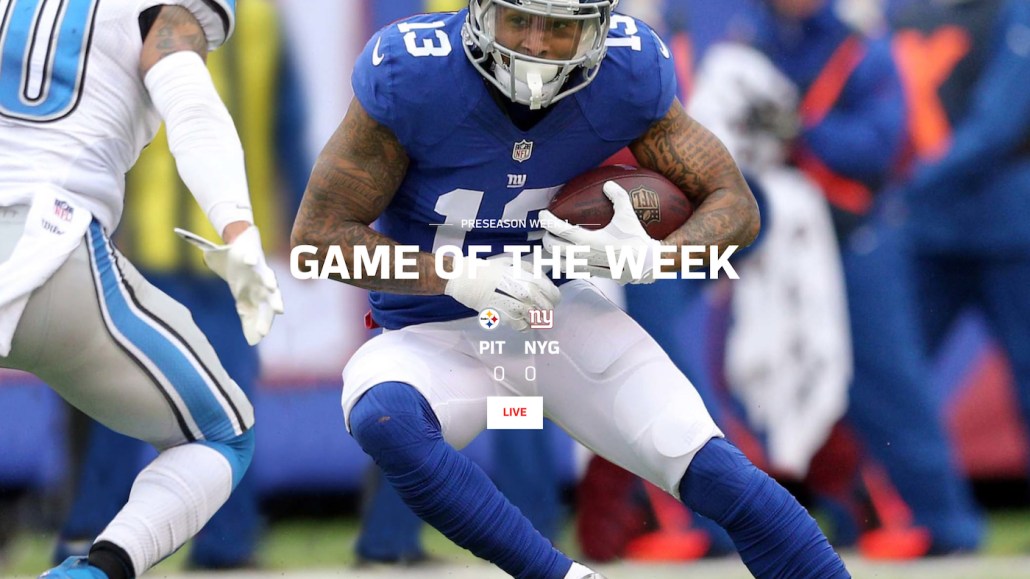 The NFL is betting on a new subscription streaming service as it tries to push further into Europe.

American football has gone from hosting one live game in London to four over the last decade. But now, the NFL is trying to grow its streaming service that charges people £139.99 ($183) a year for access to more than 300 games on demand a season.

The Netflix-style Game Pass service has been overhauled for the 61 European markets the NFL operates in ahead of the new season, which started Sept. 7. Subscribers get access to award-winning shows and behind-the-scenes content as well as the option to watch every game. The NFL owns Game Pass, but a joint venture of Bruin Sports Capital, its sports media entity Deltatre and WPP runs the service.

To survive, sports organizations must own the relationship with their fans, said Alistair Kirkwood, the managing director of NFL UK. “Streaming hasn’t been at the forefront of our business, but increasingly over the next five years, Game Pass will be seen as a major part of our business strategy,” he said.

It’s a lofty goal for a sport that’s competing outside of its home base and at a time when illegal streaming is rife. Kirkwood believes there’s big value in having a fan database, though. Early results from the content tested on the service during the preseason have been encouraging; the NFL doesn’t disclose numbers but said Game Pass has posted record numbers of people signing up for free seven-day trials and then later purchasing the product, and people have streamed up to 12 live preseason games on some days, said Sam Jones, CEO of the joint venture for Game Pass. Kirkwood is also encouraged by meetings he’s had with Amazon Prime after the two organizations struck a deal earlier this year to stream 11 games to Prime subscribers.

But James Kirkham, head of sports publisher Copa90, said that to really scale, the NFL will have to create exclusive content that’s tied to the games: “stunning, iconic [film] content, which people will queue up to watch.”

The NFL has limited popularity beyond the U.S. But Game Pass and Amazon are also exercises in how data has quickly become a currency in sport. Amazon gets data on NFL fans to whom it could potentially sell products and attract sponsors, while the NFL gets the reach of a platform that has at least 66 million subscribers and potential interest from advertisers who want to target sports fans.

Yet for all of Amazon’s potential, Kirkwood stressed that the streaming partnership is still just an experiment and downplayed concerns that Amazon’s or Facebook’s moves into sports broadcasting are a threat to the NFL’s own efforts to own a larger slice of the league’s viewership. He believes the NFL will be able to deliver tailored content, targeted to those who want it most, when and how they want it.

“Maybe I’m naive, but I don’t think about what I’m not getting [from deals with the technology players],” he said. “I focus on what I will get, which will be complementary to other platforms we’re on. Facebook Live, for example, will give me something else that maybe our own channels like Game Pass or the BBC won’t get or vice versa.”

In 2022, the NFL will be at the end of its five-year game plan for streaming in Europe, the same year its lucrative TV rights are up for grabs in the U.S. By then, the league’s executives in each of those 61 markets will have shared so much information with the NFL’s main team in New York that it could be set to capitalize on any interest from the likes of Amazon or Facebook, should it manifest.