‘Scale itself isn’t that transformative’: Insights on sustainable publishing models from the Digiday Publishing Summit Europe

Publishers are emerging from a winter of reckoning with an air of realism. Multiple media companies have announced layoffs as the digital ad economy faces pressure while growth flows to U.S. tech platforms. Yet publishers still need to rely on platforms for reach, giving up full control over their audience and strategies. On top of that, the aftermath of data privacy rules, like the General Data Protection Regulation, have tightened the grip on data sharing for ad targeting, squeezing programmatic revenues.

Publishers gathered in Milan, Italy, on March 5 – 7 to discuss these issues and more. Here’s what attendees learned:

Smart revenue diversification means new ways of working
Digital media is a tough game, it’s no secret the digital ad market is under pressure and publishers are left fighting over scraps that don’t go to Google and Facebook. Companies like Vice, BuzzFeed and Stylist Group have announced redundancies and branched out into other areas.

Overheard:
“When you have too many revenue sources in a small team, it’s a problem because you can’t specialize. Ultimately, it’s going to be a lot of people doing a lot of work and keeping on a collective revenue stream with low growth. You have to cut things with low growth.”

There is no one-size fits all for subscription models
Subscription and membership programs are a key revenue stream publishers are exploring. But many are finding it tough convincing readers they have to pay for previously free content while understanding what it is readers are willing to pay for.

Overheard
“Reconciling members versus subscriptions, some of our sites have really hardcore tech readers that can lead to a level of toxicity. We need to balance subscribers and members, and building a community people want to engage in.”

Successful international expansion takes nuance
Headlines have been dominated by media companies streamlining international bureaus, cutting costs often through human casualties. But this isn’t felt across the board, and there’s room for growth overseas if done right. Business Insider, owned by Axel Springer, now has 150 million global unique users, adding 17 million uniques last year. The U.K. office is the hub for its international editions — it has editions in 16 markets across nine languages — while the U.K. is a wholly owned business, the others are license partnerships.

Sustainable media models need constant evaluation
News UK has experimented with different paywalls and membership models across its newspapers, U.K. tabloid The Sun and broadsheet The Times of London. Aside from constant evaluation, a diversified mix and a sustainable media company need to be underpinned with data, said Ben Walmsley, commercial director, publishing. Here are the key points from his session:

Overheard:
“In the old days, people would phone you up saying, ‘I’ve bought some digital stuff from you; here’s another massive IO because we like you.’ Those days don’t exist anymore, and management believes they should. You still want to continue to grow digital, but the scale of how we do that is proving more difficult than it used to be.”

“There are too many vendors. You get oversold. The whole programmatic stack is inefficient. A lot is smoke in mirrors, and it’s hard to tell what provides value. It’s hard to find the real value in what a lot of people are providing.”

“As publishers, we say video, video, video. What’s challenging is monetization with video in pre-roll. It’s more annoying than a TV ad. There’s not enough innovation in going any further than the pre-roll.”

“There are too many vendors. When you get approached, you often ignore them. What we do is anyone who reaches out we test them. You have to see what advantage they can give you.”

“Just because you slap your name on it doesn’t make it your product. Why would a client come to us for a financial product they can get anywhere else? They’ll come to us for something exciting, something different.” 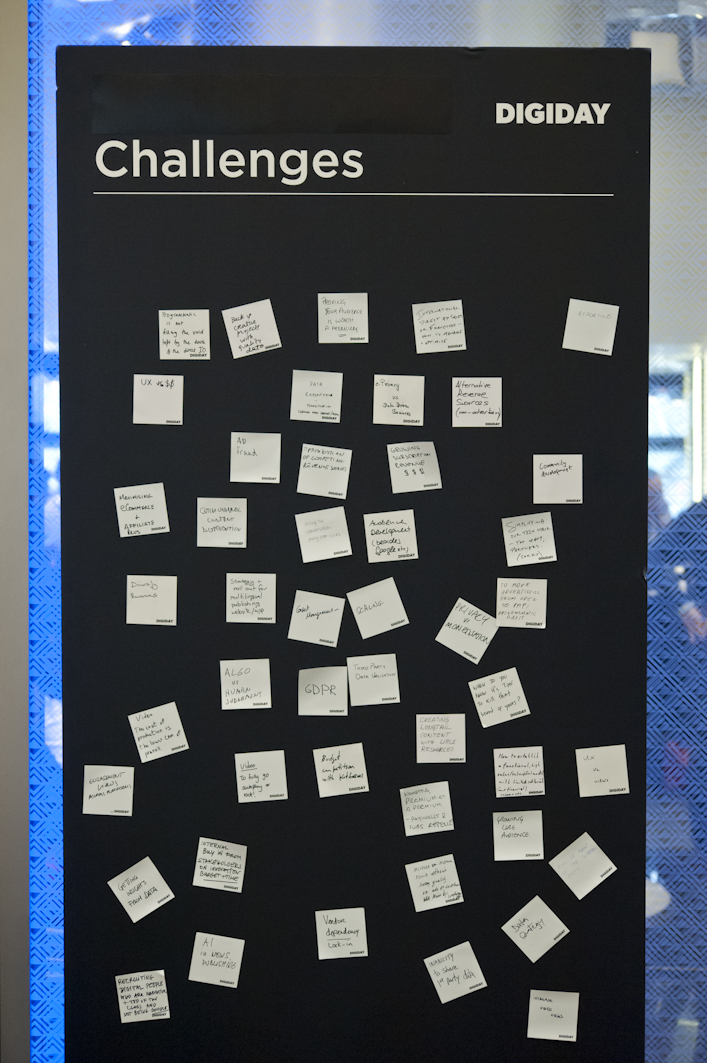