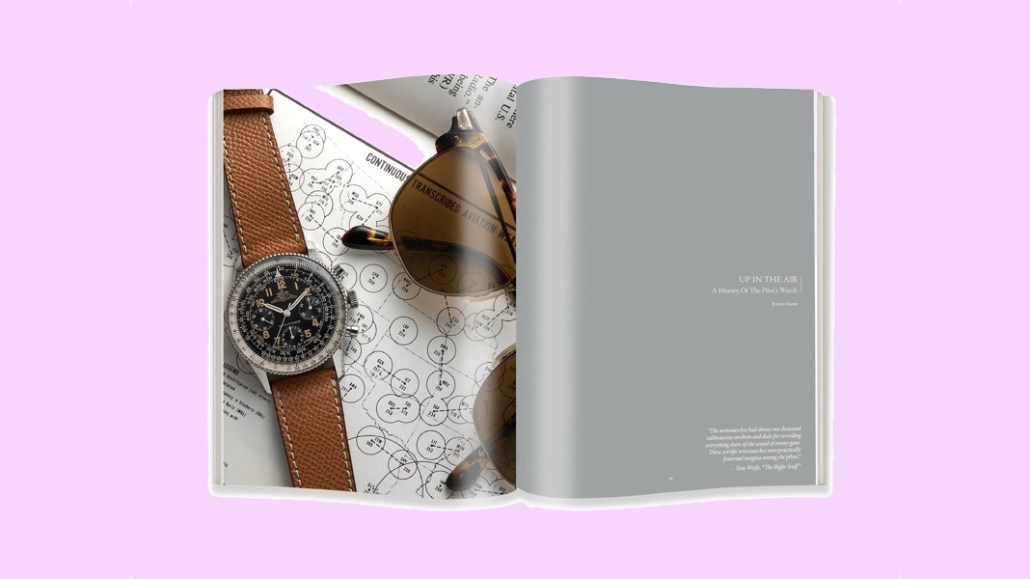 Print media might be in decline, but luxury-focused publishers – even a few digital native ones – are getting increasingly physical.

All three are niche products aimed at small, well-heeled audiences. But they also prove that print still offers stability and opportunity for luxury publishers, something that’s especially valuable in an increasingly grim-looking digital ad market.

“We can’t compete with Google and Facebook [for digital revenue], and we don’t want to,” said Andrew Tuck, the editor of Monocle. “There’s this growing realization that the likes of Google and Facebook and Instagram are not playing a fair game. Until that relationship gets worked out, [publishers] have to think more about this.”

Print advertising is in an indisputable decline. U.S. newspaper ad revenues decreased 12 percent in 2016, sliding to $12 billion, while American magazine ad revenues fell 9 percent to $8.5 billion; 10 years ago, print advertising represented $43 billion and $19 billion, respectively, for those two industries, according to research published by Magna Global.

However, money is flowing out of the market unevenly. Even though some brands are putting ever-growing shares of their marketing budgets into digital, luxury brands still dedicate sizable chunks of their ad budgets to appearing on the pages of magazines.

But print and digital publishing are different animals, and they require different kinds of talent across the board, from writing to design to distribution. In most cases, that work can be outsourced. Goop, for example, let Condé Nast take the lead on art direction, ad sales and distribution duties. Freelance contributors wrote a lot of the features.

The publishers have a lot of experience to draw on, however, when it comes to selling the magazines. While all three have some physical distribution partners, Hodinkee, Monocle and Goop all have substantial e-commerce businesses, which gave them good consumer bases to target from the start; Hodinkee sold 20 percent of its first issue’s run through its own website within 48 hours of putting it on sale.

They also had established brand relationships they could use to sell ad space. To capture brands’ attention, Monocle and Hodinkee dangled involved, exclusive opportunities. Every advertiser in Monocle’s newspapers, for example, got category exclusivity. In Hodinkee’s first magazine, a 160-page fall issue, there were just seven advertisers, each with their own spread.

While the publishers were newcomers to print, each brought a credibility. “Advertising demand for this product was actually really high,” said Matt Starker, Condé Nast’s gm of digital, adding that he sees a future in offering these services to third-party digital publishers. “This is definitely a model we can replicate.”