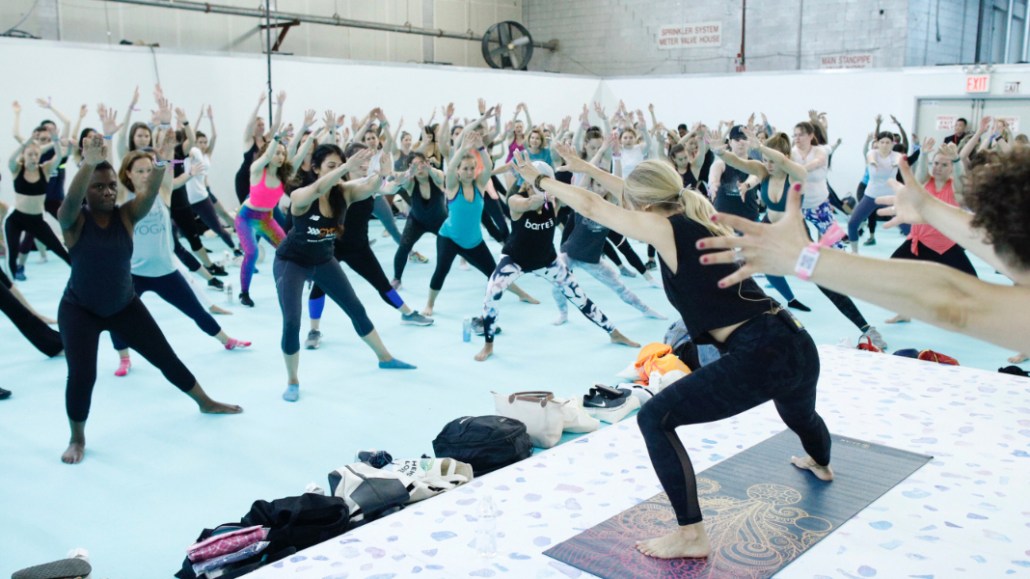 PopSugar is launching a new day-long fitness- and wellness-focused event, called Grounded, as a spin-off of its annual Play/Ground festival.

The event, which will take place in Los Angeles on March 7, is an attempt by PopSugar to extend the Play/Ground franchise, which it created three years ago.

Grounded will feature 10 workout classes throughout the day, host six to eight panels and will have other activations and rest areas that focus on wellness. Similar to Play/Ground, the event will be monetized through ticket sales and sponsorship, with tickets ranging from $25 for a half day or $40 for the full day. PopSugar is anticipating approximately 1,000 attendees throughout the day.

The two-day long Play/Ground festival features activations that are tied to the most popular categories on the site including celebrity, fashion, fitness and beauty. From the first year to the second year, attendance more than doubled to more than 15,000 attendees in 2019 and sponsorship revenue increased by 18% year over year. (The publisher declined to say how much money it made.) In total, the number of brand sponsors increased by 60% to more than 200 brands, vendors and activations that were partner-driven.

“Ideally once a quarter there will be one variation of Play/Ground,” said Lisa Sugar, editor-in-chief of PopSugar. Play/Ground takes place in June, or the second quarter of the year, with Grounded accounting for the first quarter.

The first time that PopSugar tested this segmented franchise model was with the Sugar Chalet in November. The event was a one-day, holiday-focused activation in New York City that touched on the same popular topics as Play/Ground, but instead of having full celebrity panels or several workout classes, it had one celebrity meet and greet and two yoga classes.

Sugar Chalet had more than 1,500 guests throughout the day, about a tenth of the total that Play/Ground had over two-day long affair.

After the first year of PopSugar’s Play/Ground, Sugar said the goal was to find other ways to expand this franchise that her team created. She said she wanted to figure out “how do we do this all the time,” to continue growing the in-person engagement between the brand and its audience, but also offer deeper avenues for sponsorship.

While Sugar said it is not currently feasible to take the entire Play/Ground model to new cities or replicate it more than once per year for cost and logistical reasons, it made sense to instead break it down into smaller, day-long experiences and were more niche in topic.

This year, in the third quarter, Sugar said the goal is to expand on the “play” portion of Play/Ground and make a one-day event revolving the other key categories of the tentpole event — celebrity, beauty and fashion. The official timing and program of this event has yet to be announced.

Fitness and wellness has been central to PopSugar’s events and commerce businesses in the past year. Last year, the company launched a series of wellness-themed events in partnerships with Samsung called the Well. In August, the publisher also created its own marketplace for fitness goods and classes called Glow.

Revenue from experiential events accounted for approximately 15% of PopSugar’s overall revenue last year, according to Sugar. Group Nine has a central experiential team of 11 people that is tasked with creating not only PopSugar’s events business, but for four other titles under the company, as well as supports the custom events business.

Scott Schwartz, the global comms planning director at media buying agency PHD Worldwide, works on the company’s Volkswagen account. He said that in order for national sponsors to be interested in smaller and more localized experiential media buys, there has to be enough return on investment beyond putting the product in front of the audience.

“What’s the next step?” said Schwartz. “Either you make it big so everyone sees it,” by getting national exposure through news coverage or content created and shared by the publishing partner themselves, or “make it smaller.” He said there is also a micro-aspect of these kinds of events where the sponsor will want to capture enough data in order to later reach back out to the attendees to close the deal.

Thomas Ordahl, the chief strategy officer of the brand consultancy Landor, said it is more and more common for publishers to be looking at the various ways they can further monetize the community they’ve built on their platforms. Similar to the TEDx model, he said that if a franchise has a significant following and interest, it makes sense to create smaller events for localized audiences.

“Before you would build a business and then attract the consumer,” Ordahl said. “Now, you’re building the community and then building the business after that,” which he said he expects will be the model that a lot of publishers will follow in the coming years.