In France, Snapchat takes the lead in producing political content 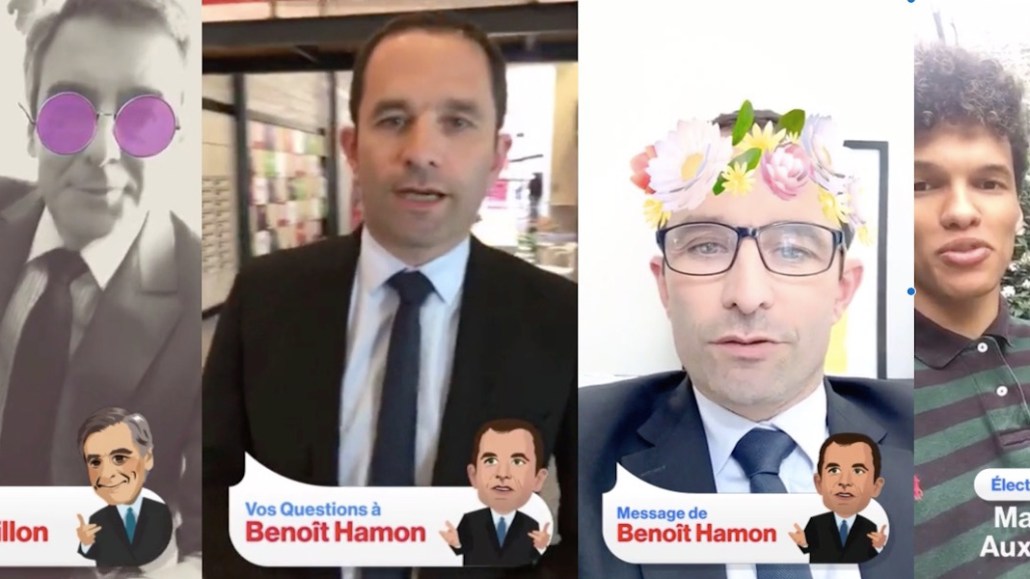 Snapchat Discover is notorious for its Kardashian content in the U.S., but in France, Snapchat Discover has become a tool for French voters seeking clarity and information on the fast-approaching national elections. Interestingly, Snapchat is taking a lead role in creating political content.

The platform, which has 8 million daily users in France, is giving its French users a chance to submit questions of the main political candidates in the run-up to the first wave of elections on April 23. Users can submit videos where they ask a specific question or can send in questions via messages. Snapchat’s London-based Our Stories team selects the best questions and relays them to the candidates, who give their own video responses, which run on Discover France. Between 10 and 15 questions are posed, with each response taking about 10 seconds. Each video is about five minutes in length.

Conservative candidate Francois Fillon was first up. A video of his responses ran on Discover on Monday, March 17. Fillon was asked questions like: “I’m a law student and can’t find an internship like many of my peers. Can you bring us in as parliamentary assistants?” and “What do you plan to do for the 9 million people living under the poverty line in France?”

Socialist party candidate Benoît Hamon was featured on Tuesday. He was asked what he would do for students and what initiatives he has planned to revive the European Union. Both were asked what their favorite Snapchat filter was, what they wanted to be when they were a child, and whether they would welcome more migrants in France. Both also had to explain in 10 seconds why voters should pick them.

National Front party leader Marine Le Pen will be featured in Wednesday’s Story. A different candidate will be featured each day this week. It plans to run a geofilter informing Snapchat users how they can vote even if they physically can’t be around on the day, and prompters reminding them the voting day is a few days away.

On election day, a selection of voting-themed lenses and geofilters will be made available for French Snapchat users to show and share support for their preferred candidates. An Our Story will also run, featuring national and local election results, input from political journalists, and the acceptance speeches from the candidates and footage of their election night celebrations.

This is the first major push from Snapchat to engage users with politics in France, having run an initial geofilter last November reminding users to register to vote. It also ran a Story covering the primaries in January in France, featuring an exclusive reaction of the Primaires Citoyennes winner Benoit Hamon. Likewise, in the U.K., it has made a concerted push into political coverage, having published Stories related to Brexit. It also recently partnered with the Electoral Commission to run geofilters encouraging young people in Scotland to vote.

London is the main international hub for Snapchat, although its news team works with a Europewide purview and there are native French speakers on the team. France was Snapchat’s first non-English speaking market, and a big priority in the platform’s international expansion. It won’t reveal exact head count for France, but agency sources estimate there is 10 to 15 people in France. Snapchat hired its first team lead for Germany last week. Marianne Bullwinkel, a former Facebook executive, was hired as country manager for Germany, where she will lead a team. Though Snapchat is equally secretive about the location and size of the German team.

“France is clearly a big priority market for Snapchat, and I believe one of their biggest, despite the fact Instagram has really dug into their market share in the last few months,” said Sened Dhab, head of social for Paris-based digital agency Darewin.

Although Snapchat Discover has become known for its entertainment-led content, agencies believe the platform is in prime position to engage younger generations in politics.

“Snapchat is a fantastic network for getting millennials and the younger population engaged,” said Dhab. “If you can get them politically engaged, this is a great way to do it. And Snapchat does have that potential. It has the potential to become much more than a fun entertainment platform but more of a news platform like Twitter and Facebook.”

https://digiday.com/?p=232804
Most Read
Trending in Publishing in the Platform Era
Digiday Top Stories