What football site Goal has learned from its Messenger bot 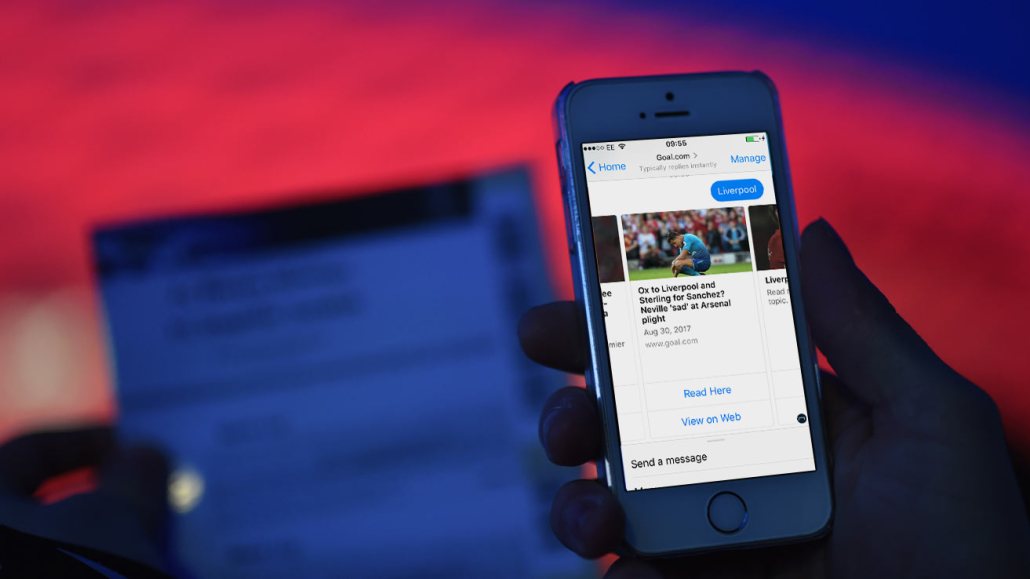 The initial hype around Messenger bots has died down, but U.K. football site Goal is convinced of their ability to build brand awareness, spending the last six months refining its bot strategy.

The Goal bot has 115,000 subscribers, and it adds about 500 subscribers per day, according to the publisher. But Goal’s focus is the time people actively spend using the bot rather than total subscription numbers, which soon become meaningless, similar to app downloads. Seventeen thousand people engage with the bot daily, a figure the team has steadily increased by experimenting with its approach.

Goal plans to apply what it has learned from its bot, which is for English speakers, to inform native-language versions for other major European football markets where it has offices.

Don’t waste time on scale
Goal’s initial intention for the bot was to let users search for news by player name, football club or league name. The football site covers thousands of football players across the globe, but the bot focused on the five main European leagues: the Premier League, La Liga, Serie A, Bundesliga and Ligue 1. That amounts to hundreds of teams and even more player names that had to be manually added. This allowed users to search in the bot for well-known players like Brazilian star Neymar and then receive the latest five stories about him. Hundreds of players were added to ensure the bot could respond to searches for less prominent players.

It soon became clear that was wasted effort. “We concluded that people aren’t using bots to search; that’s what Google’s for,” said Paul Rayment, Goal’s marketing manager. “We decided to integrate [the bot] with Google’s search API, so we can reduce the time we spend building the structure. That shifted our attention from the scale of the bot toward focusing on its usability and navigation.”

People don’t search on bots
Regardless of how many keywords are built into a bot, people simply don’t search without prompts. For that reason, the team has added buttons at the bottom of stories to try and lengthen engagement. For instance, a “transfer news” button has been added to the bottom of all stories about players being transferred this summer. Another example: A lot of transfer talk occurred about French player Ousmane Dembélé, who recently signed with FC Barcelona. By adding a “Dembélé” button to all transfer-related stories, the number of people who clicked through rose 200 percent, equating to 2,000 people. Goal uses the same tactic for all big player transfers.

Incorrect spelling impedes engagement
Not all footballers’ names have straightforward spellings, and as such, names would be misspelled at times, and the bot couldn’t respond with the right news links. Now, Goal uses proxy names — like player nicknames — to avoid that. For example, anyone searching in the bot for Liverpool’s Alex Oxlade-Chamberlain can type in his nicknames, “Oxy” or “The Ox,” rather than his full name to get news.

Exclusives don’t resonate if mistimed
Publishers have often distributed scoops or exclusive interviews on platforms like Facebook to drive engagement. Goal has found that regardless of the exclusive, Messenger isn’t the right outlet for it. It tested running exclusives to see if people would engage more with the bot after receiving an initial news bulletin distributed in the morning according to user time zones. The experiment didn’t last long. For example, Goal sent a link to an exclusive interview with Liverpool manager Jürgen Norbert Klopp to all users who had subscribed to receive Liverpool news. “The personalization of what you do needs to be incredibly unobtrusive,” said Rayment. “People didn’t engage with that at all, because it wasn’t sent within their daily bulletin at a time they’d expect.”

Bots can be effective marketing tools
The bot pushes between 3,000 and 5,000 people a day back to the Goal site — a small number for a site that claims 65 million monthly views globally and 700,000 email newsletter subscribers. “We do know the bot is putting Goal front and center of our fans’ football news consumption,” Rayment said. “It’s raising brand awareness in a way that is not obtrusive because people have subscribed to it. While people have subscribed to our email newsletter the news each person gets isn’t personal to them. With our bot, we know that if you only care about Manchester United and Neymar, that’s what you’ll get, although with a few tweaks we can also point that person in the direction of more stories they may be interested in,” he added.

https://digiday.com/?p=252293
Most Read
Trending in Publishing in the Platform Era
Digiday Top Stories