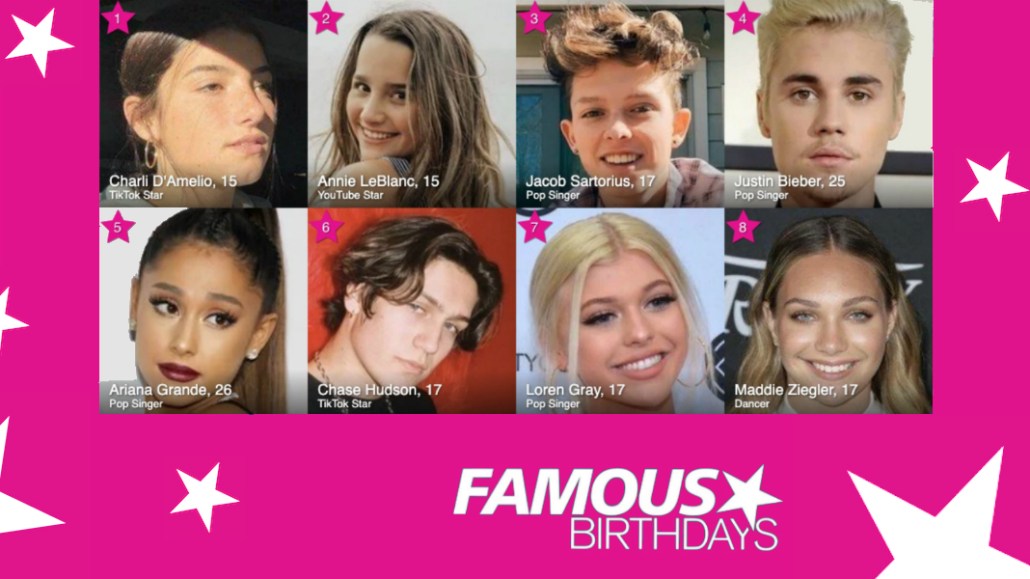 The site recently logged 25 million unique monthly visitors, said CEO Evan Britton, who founded the site in 2012. Seventy-five percent or more of these visitors access the site via mobile devices or even by using the Famous Birthdays mobile app, according to the company’s own analytics. Comscore has reported that Famous Birthdays drew 6.3 million users in December. A bootstrapped operation, Famous Birthdays has a staff of 35 people including freelancers and is profitable, Britton said.

After recently moving into a new office space in Santa Monica, California, Famous Birthdays has started producing video content. This effort has included bringing TikTok stars into the office to produce short-form, entertaining content for its website and social media channels.

For now, Britton has decided to devote nearly all of the company’s resources on content and platform creation rather than building a sales team. Instead, nearly all its revenue is sourced from automated ad systems, purchased on display ad exchanges, and video ads bought on platforms like YouTube and Twitter.

“Direct sales takes effort and focus and sometimes you have to do things that your advertisers want versus what your users want,” Britton said.

Famous Birthdays now serves more than 500 million programmatic impressions per month, Britton said. The site uses an open platform similar to Wikipedia’s. Famous Birthdays does not collect data about its users. Its editorial staff creates profiles about celebrities with basic biographical information, including birth dates and birthplace. The site also has an interactive popularity ranking system that tracks a celebrity’s status, based on the number of searches for a name and interactions with a Famous profile; the celebrity’s rating can also be “boosted” by individual votes.

“Wikipedia had too much info for mobile [platforms,] and it didn’t focus on the stars that [Generation Z] cared about,” he said.

Britton said Famous Birthdays doesn’t have any way to obtain demographic information about its users, such as their ages; the site does not rely on any first-party cookies or logins. But the number of top-ranked celebrities on the site’s most popular page that are from Gen Z or from Gen-Z dominated platforms, like TikTok, indicates to him that people searching for these celebrities would be from a similar age group, Britton added.

This year the company will focus on monetizing the new video content that Famous Birthdays is creating on its social channels, Britton said. On the company’s YouTube channel (with 817,000 subscribers) and Twitter channel (464,000 followers), the videos will include pre- and mid-roll ads, he noted. He hopes that in the future Instagram’s IGTV platform will have ad monetization strategies. Facebook is not included in the site’s video distribution strategy, however.

“We’re not relying on social. It’s additive to the platforms that we already had,” Britton said.

Because of this, Britton is beginning to receive requests from advertisers about direct ad opportunities on the site, even though he lacks hard data about its visitors, he said.

Previously Britton has not incorporated direct sales into Famous Birthdays’ approach because he was focused on the site’s usability, he said, noting that he was worried certain ad integrations, such as autoplay ads, would slow down the site’s performance.

“This is an ad-supported business, and the goal is to extract maximum value from the site,” said Ameet Shah, vp of publisher operations and technology strategy at Prohaska Consulting. “So from an ad perspective, not having first-party cookies could impact monetization,” said Shah, whose company is a programmatic consultancy. “All ads impact user experience; they have to figure out what is the right balance in their mind.”