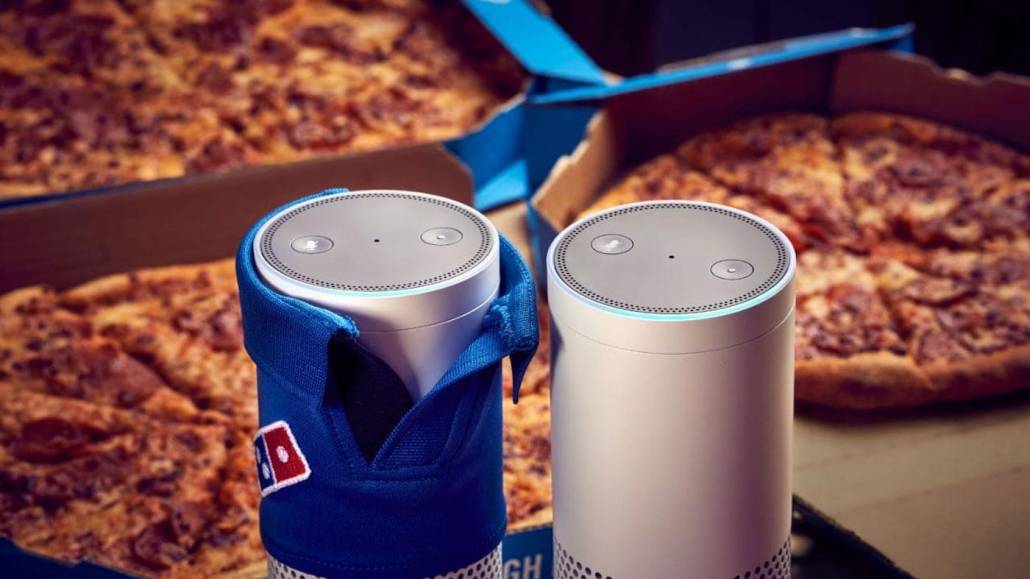 Domino’s is letting people order pizza through voice-controlled devices, and the early results are promising.

One in five customers who can order a pizza with one click through the pizza chain’s Easy Orders option has asked Amazon Alexa instead, two months after making the feature available there, said Nick Dutch, head of digital for Domino’s UK.

Domino’s introduced Easy Orders in 2013 and debuted the feature on Alexa at the end of July. To use it, customers must create a Easy Order account, which lets them save their favorite order and submit it through platforms including Domino’s website and app, Facebook Messenger and Google Home. The pizza chain sees Easy Orders as a way to apply Amazon’s one-click shopping model to pizza ordering and aggressively promoted its Alexa skill in the summer to get people to buy and track their orders this way.

Domino’s doesn’t break out voice or Easy Order sales as a percentage of its online earnings, but Dutch said the initial orders on Alexa proved it “backed the right horse.”

Voice could be key to Domino’s growing the Amazon-style model, given it is looking for the next big sales channel after desktop and mobile. The pizza maker has opted to sell direct to customers rather than through online delivery companies like UberEats and Deliveroo, which could leave it exposed should its online sales dwindle and those companies continue to grow.

Domino’s same-store sales in the 26 weeks ended June 25 declined 13 percent from the previous year. While voice, and more broadly, Easy Orders aren’t a quick fix to the decline, they simplify the ordering process, making it easier to get people to buy. It worked so well for Amazon that it patented its 1-Click process in 1999 and fought hard to prevent others from copying the process until the patent expired earlier this month.

“The reality is right now there aren’t millions of people who are doing that [making voice orders],” said Dutch, speaking on Sept. 27 at a We Are Social event. “We’re building for the future, and we need to leverage this [early growth] … in the hope that over time, more people use the technology.”

Domino’s immediate focus is on growing direct sales from voice-controlled devices with options such as letting customers pick different toppings and locating their nearest store. At some point, however, the company will need to consider search ads, particularly if comScore’s prediction that 50 percent of all searches will be done by voice by 2020 comes true.

Elsewhere, Diageo and Unilever have recently revealed their own plans for voice searches. Unilever’s Cleanipedia Amazon Echo skill, which answers questions about home cleaning with a direct link to e-commerce, now has 15,000 users in the U.K., where it debuted. The consumer goods company plans an 11 percent increase in investment in voice.