Digiday’s 2015 headlines: By the numbers

The end of the year is a time for retrospectives.

While some publishers may choose to do it by looking back at their most “popular” or “shared” (or most “ad revenue-generating”) stories, Digiday is feeling a little more meta minded.

Here’s the year in Digiday journalism, broken down by the numbers.

Times we went “inside” something: 110

Inside porn’s breaking-news hub
Inside BuzzFeed’s new app
Inside Deloitte’s $1.5 billion agency
Inside the email inboxes of marketing executives

Five times we told you ‘five things’ about something:

The number of times we used a headline trick we refer to as ‘titular colonicity‘: 1,267

We live in an age of wonders: The taco emoji has arrived
Costolo out: What agencies want to see next at Twitter
Father of the emoticon comes out swinging: I think emojis are ugly
The ‘Ice Bucket Challenge’: A case study in viral marketing gold

The number of stories we wrote about the Ice Bucket Challenge, even though it was a thing in 2014: one

Why Red Nose Day was no Ice Bucket Challenge

The number of times we reported on emojis:  84, a 92 percent increase year-over-year

The times we had questions about millennials: 73

Including:
Will millennials cough up money for media?
Do we need millennial-focused ad agencies?
WTF is a millennial ‘Henry’?
Is millennial job-hopping really a problem?

Times we wondered “how”: 351, an average of one a day, barring major public holidays

Including:
How Southwest Airlines turned social media into social business
How Crunchyroll gets 750,000 people to pay for anime
How New York Times vet Denise Warren is trying to modernize Tribune Publishing
How sports comedy site The Kicker plans to get brands involved

Bonus: This one also deploys titular colonicity:
‘In China you have to use it’: How WeChat is powering a mobile commerce boom

How often we wrote about publishers 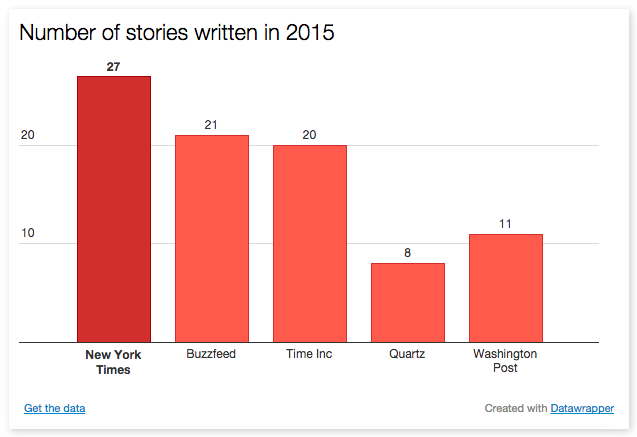 Our favorite confessions quotes:
I think every smart salesperson knows who the people on their lists are that need to be gifted in order to grease the wheel. We call them media whores. — Confessions of a publishing ad exec

I can’t imagine doing this when I’m 50. — Confessions of an agency millennial

I might be on the phone with you holding in pee because I need to go to the bathroom and you won’t stop yelling at me. — Confessions of a Comcast customer service rep

It’s easier to be a fraud at an agency. — Confessions of a client

Times we explained things to you: 148

Including:
Why ‘acceptable’ ads are no silver bullet for ad blocking
Why Business Insider won
Why fashion and beauty brands love Instagram
Why Wendy’s went upscale on Instagram

Number of stories we wrote about ad blocking this year: 104, up 97 percent year-over-year.