At the Digiday Hot Topic: Future of TV event earlier this month in New York City, we surveyed over 60 media, TV and advertising executives from major companies to better understand the over-the-top landscape. Check out our earlier research on top-performing OTT and online TV services here. Learn more about our upcoming events here.

Creation vs. selling
The growth of OTT services has sparked a bidding war between Netflix, Apple, Hulu and HBO among others as they all look to spend over $1 billion to fund original shows or acquire licensing rights from other producers. This has put legacy media companies and TV networks in a compromising position. Do they leverage their existing content to create an OTT product, or do they sell or license their content to an existing OTT platform for a fee? According to Digiday’s survey, 56 percent believe selling or licensing content is the better option. 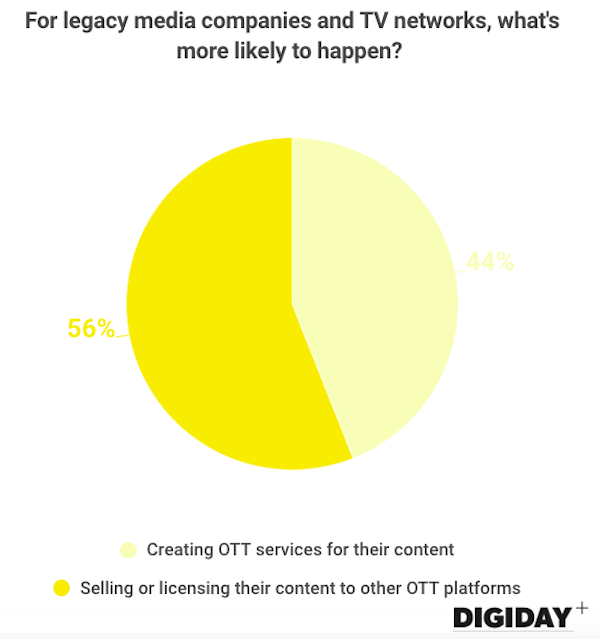 Faced with decreasing ad revenues, many TV networks and legacy media publishers have embraced licensing their content as an additional revenue source. Legacy publisher Condé Nast, which licensed several programs to Sky TV and Amazon, pursued licensing rather than producing its own OTT product. Fusion Media Group, owned by Univision, which has a TV network, is producing content that will air on TV through Univision and that is also separately licensed to Netflix. CBS, which has its own linear TV station and OTT app, licensed the rights to its show “Madam Secretary” to Netflix in a deal that help offset decreasing ad revenues.

Creating an OTT service isn’t impossible. In fact, it’s far from it. “There is a low barrier to entry into the OTT market,” said Brett Sappington, senior director of research for Parks Associates. “Services can launch services with minimal capital. Some have reported launching subscription video-on-demand services for under $10,000.” While not all OTT platforms will cost so little to create, many TV networks are getting into the action, with Fox News the latest to launch an OTT offering. Scripps Networks, which operates Food Network and HGTV, has also created an OTT channel to reach millennial users.

However, neither low barriers to entry nor significant financial backing guarantee success. Comcast is no longer investing in new content for Watchable amid low subscriber numbers. Watchable’s failure to take off serves as a reminder to other major networks and media companies that believe enough investment will lead to successful products. 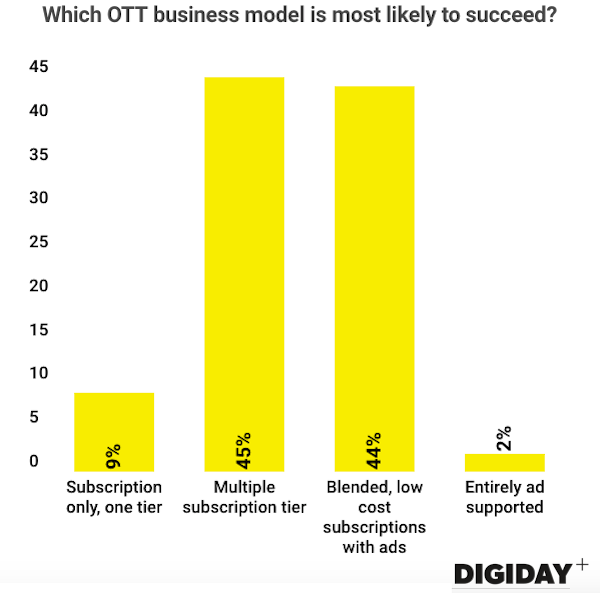 While 44 percent may believe low-cost subscriptions mixed with advertisements are the way forward, advertising in OTT environments has its own difficulties. Advertising in OTT appears to be one to two years away, if not more, according to earlier Digiday research. Additionally, issues surrounding campaign measurement and reliable effective attribution analytics hamper OTT. Ad-supported services may never outgrow established giants Netflix and Hulu, but that doesn’t mean they’ll disappear entirely. “Ad-based services will play an increasingly important role with consumers and with the industry,” said Sappington. “While consumers don’t like ads, they do like access to free content.”

OTT platforms chase new customers
Content is expensive. Just because a company is spending millions, if not billions, to acquire or produce content does not mean the company is profitable. In fact, high content costs could be influencing OTT companies’ top priority for the coming year. Nearly half, 45 percent, of respondents to Digiday’s survey believe customer acquisition should be the main goal of every OTT platform in 2018. Companies investing heavily in content desperately need consumers to offset those costs. “Acquisition” in the response below needs to be lowercase 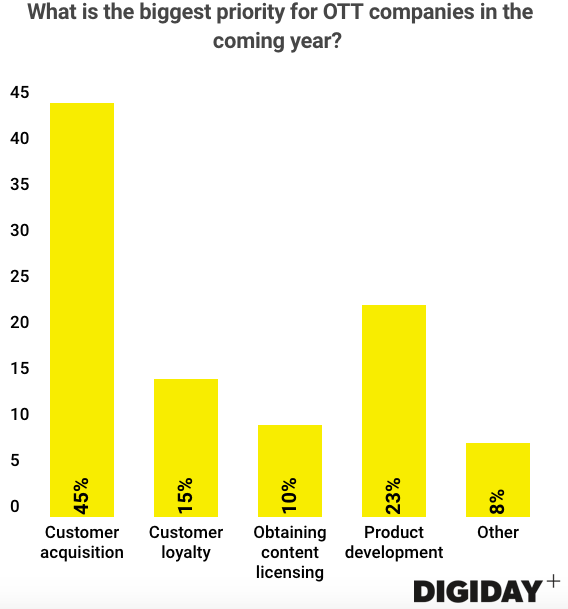 Fortunately, OTT companies are in luck, as cord cutting is accelerating in the U.S. Over 20 million people ditched pay TV in 2017, up from 16.7 million in 2016, according an eMarketer report. Pay TV is declining, with millions never having signed up for it. While this means millions of consumers looking for high-quality content to target, competition is also fierce. The OTT market is an increasingly crowded space that saw 25 new offerings created in the last year alone, Sappington said. Thankfully for OTT companies, over half of consumers subscribe to multiple services, reducing the risk that any one company can monopolize the market — for now, at least.