European publishers certainly don’t see over-the-top platforms as their key video focus, but they are increasing the amount of OTT content they produce according to a recent Digiday survey. That increase in OTT production comes even as publishers state they’re struggling to monetize the content they create for OTT platforms.

Three-in-ten publishing executives surveyed at the Digiday Video Summit Europe in Amsterdam this June said their companies are significantly increasing the level of OTT content produced. Overall 79 percent of publishers are increasing their OTT output and none reported a decrease in production.

Publishers’ ongoing search for new revenue streams beyond advertising and remaining trepidations over the market for short-form video are the contributing factors pushing them towards OTT content. Producing long-form video content poses an alternative solution because publishers are able to leverage owned content for potentially lucrative content-licensing fees from OTT platforms while simultaneously reducing their dependency on ads, making it difficult to profit from short-form videos.

Major platforms like Netflix, Sony and HBO  stated their ambitions to invest in European OTT content, but lack the international scale to fund publishers’ projects at a level competitive with regional and national TV broadcasters.

While licensing video content to platforms might concurrently resolve the problems of monetization and scale, there are repercussions. Publishers such as the BBC that license or co-produce shows for OTT players, like Netflix, forfeit the international rights to their content limiting their ability to earn revenues from their video in global markets. Users also become more accustomed to using OTT platforms to view high quality video content rather than publishers’ owned channels. 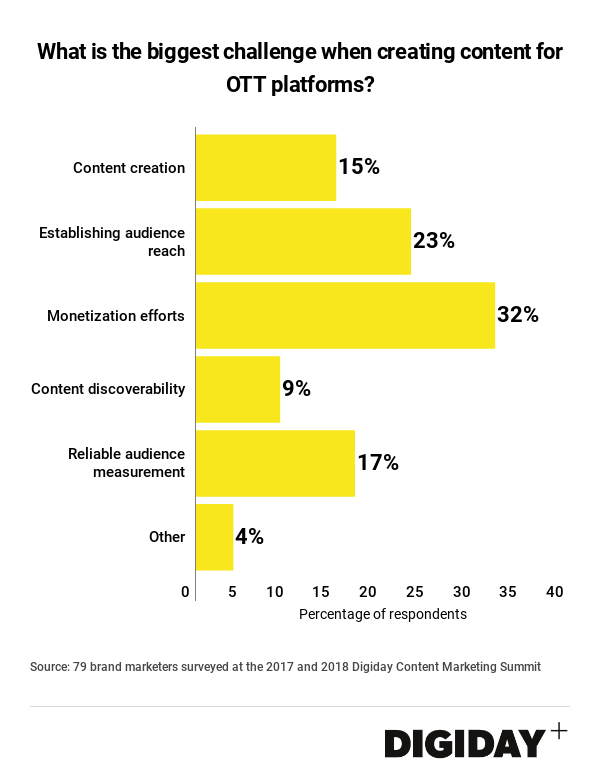