Digiday Research: European publishers bet on their own properties for video

When it comes to video distribution, European publishers are increasingly betting on themselves.

Over half of publishers surveyed at the Digiday Video Summit in Europe this June said their owned and operated properties are their primary focus when it comes to video distribution, over other channels such as social media platforms or over-the-top TV.

From a revenue perspective there’s a clear incentive for publishers to prioritize their own properties, since they’re typically the easiest to monetize successfully, according to previous Digiday research. The obvious advantage to publishers having their videos on their owned sites is that they don’t have to split revenue with platform partners, but that approach also limits their dependency on platforms, distribution partners or other middlemen. 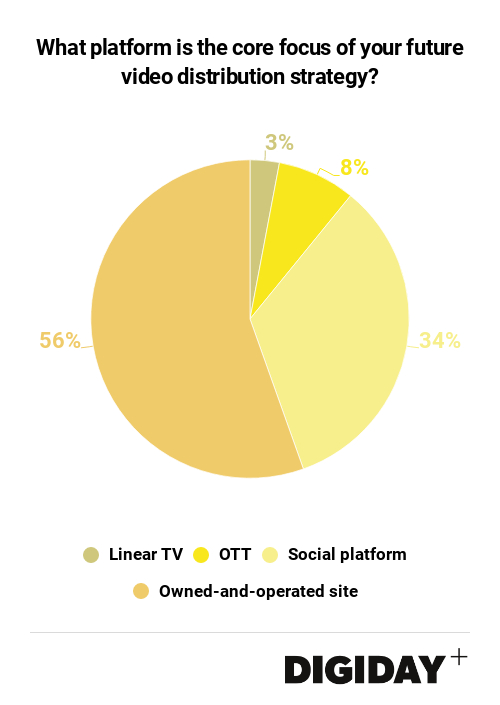 However, even publishers like Hearst UK that are prioritizing their owned platforms still pay considerable attention to their performance on social platforms. The reason is simple: scale. In smaller markets, it can be difficult to amass sustainable audiences, especially when audiences are confined by language.

To rectify the issue of scale, platforms provide an easy solution. Highsnobiety found that thanks to Instagram’s algorithm, publishers’ videos have greater reach than normal posts despite lower engagement. IGTV also offers publishers access to bigger audiences, and UK publishers have been quick adopters.

Platforms also help expose small market publishers to major brand advertisers. Boiler Room distributed video across several platforms including YouTube, its owned site, and IGTV. But because of the exposure it gained on YouTube, Boiler Room allowed it to partner with brands that otherwise may have passed on it, it said.