Fifty-four percent of television network, production and publisher executives say buyers’ demands for exclusivity are a key reason video licensing deals break down, according to a survey conducted at the Digiday Hot Topic: Future of Entertainment event this October.

In an effort to differentiate themselves from their competitors, platforms like Netflix, HBO or Hulu are increasingly hunting for exclusive content.

For video creators, selling video licensing rights in exchange for exclusivity rights for upfront one-off fees to major platforms, satisfies a short-term incentive. But doing so means that video producers sacrifice strategic options like reselling licensing rights to partners in other locations or repacking the content for future broadcast syndication.

TJ Barrack, founding partner of Adaptive Studios says that when it comes to exclusivity requirements, “acquisition of all rights is a big thing, not just domestically but internationally as well. That’s just a reality of the current market.”

It’s important to note, though, that exclusivity requirements can vary by platform and by the content being acquired. Some deals grant exclusivity in certain geographical markets while others can set for a number of years.

Publishers and production studios are trying to take advantage of the billions of dollars major OTT platforms are willing to spending on licensing fees to fuel the content demands of their users. Recently major platforms such as HBO, Netflix, Facebook Watch have all called on studios and publishers to create exclusive content for them. Mic is producing a short-form series for Facebook Watch while Amazon has enlisted Funny or Die. Meanwhile, Netflix has pursued deals with TV studios to create “Netflix Originals”.

Facebook Watch and Netflix have both rankled partners over the exclusivity requirements. “Netflix is taking everything, and their exclusivity is in perpetuity,” said Barrack. However, he added that other platforms like HBO are more flexible on the issue of exclusivity. “[HBO] is more of a traditional platform that takes the rights they need for certain markets.”

One studio executive that wished to remain anonymous said, “Amazon seems to start to follow Netflix in demanding exclusivity. Though YouTube Red has been great with flexibility and letting producers sell rights elsewhere.” He also mentioned that, [from] what I’ve heard with Quibi, the deals will be more advantageous to the producer.” 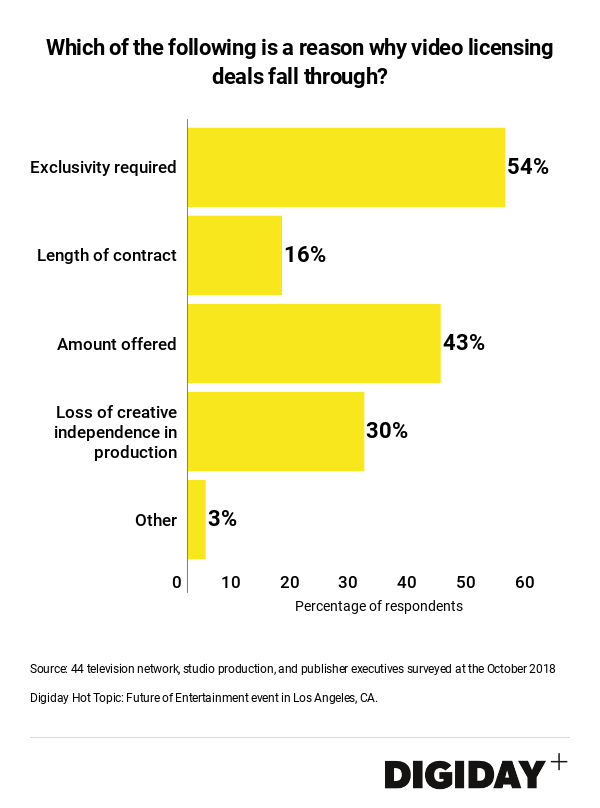 To Barrack, issues over exclusivity agreements lie with the producers and not the platforms. “The thing that came to my mind is the producer’s expectations. Buyers’ terms have changed in the amounts they’re willing to offer and what they demand, and producers also have to change their expectations.”

But in a crowded market of video producers with few buyers, video creators, who are often happy to find a buyer, might have little choice but to acquiesce to exclusivity demands. Nate Houghteling, executive producer at PORTAL A, said that with so much video being created, “[it’s] a challenge to find buyers no matter where you go.”

If video sellers, like publishers specifically, are more interested in creating brand recognition through widespread distribution, then they could be the ones backing away from deals due to exclusivity requirements according to Houghteling. That is unless the publishers use Netflix-funded shows to convince other TV networks to pay them to produce similar content.

Other producers said that being able to retain creative independence is extremely important to them when working with buyers, more so than concerns over exclusivity demands. Giving producers a free rein to create content is something Facebook Watch has gotten high marks for from at least one products. Houghteling says that for Portal-A, “to us as a production studio, creative independence is very important. Pursuing original content that we’re excited about creating is one of our main priorities.”