Digiday Research: 64 percent of publishers are unaware if they’re on a brand’s blacklist

Digiday’s “Research in brief” is our newest research installment designed to give you quick, easy and digestible facts to make better decisions and win arguments around the office. They are based on Digiday’s proprietary surveys of industry leaders, executives and doers. See our earlier research on the European publishers preparing for the GDPR here.

ISIS extremist videos, Nazis and even political news in general are all things brand marketers are trying to avoid due to brand-safety concerns.

Some brands, like Allstate and ModCloth, were initially unaware so-called alt-right news site Breitbart was hosting their ads and were slammed by consumers for supposedly supporting it. This begs the question: Just as brands were initially unaware their ads appeared in unsafe brand environments, do publishers know if brands have blacklisted them due to brand-safety concerns?

According to a Digiday survey of about 80 publisher executives at the Digiday Programmatic Media Summit in New Orleans, 64 percent were unaware if brands have blacklisted them. 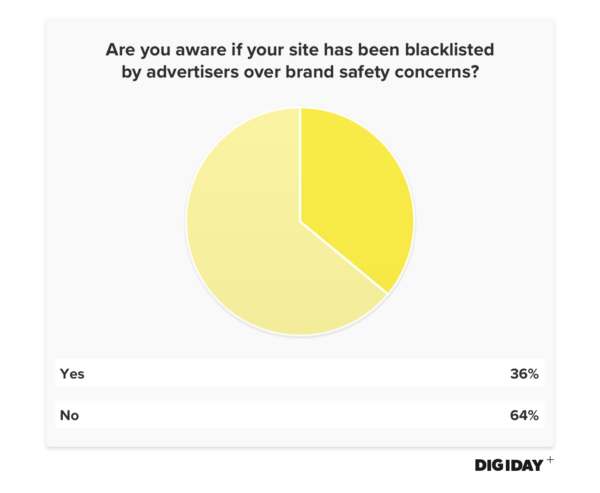 Advertisers avoiding objectionable content appear to lack a mechanism to have meaningful conversations with publishers. One publisher of a lifestyle site for women said exchanges have sometimes asked it to target away from certain content. However, it expressed frustration with its lack of leverage to change brands’ minds about what it was blocking. As a result, it reduced its coverage of sexual content from 10 percent to 2 percent in order to maintain those revenue sources.

Elsewhere, Mediasmith, which counts companies such as Salesforce and Nokia as clients, operates a public blacklist now 941 publishers long. Blacklists aren’t always perfect, and publishers often have no way of knowing whose lists they are on. In other cases, news about misplaced ads forces brands to act, as seen with Mars, Lidl and Adidas removing their ads from YouTube after The Times of London reported brands’ ads were appearing against content that exploited children. Google’s move to block ads on a page-by-page basis was seen as beneficial for smaller and midsize publishers, but publishers like the women’s lifestyle publisher mentioned above can still lose significant revenue depending on what they cover.