Despite calls for quality, publishers can’t escape the scale trap 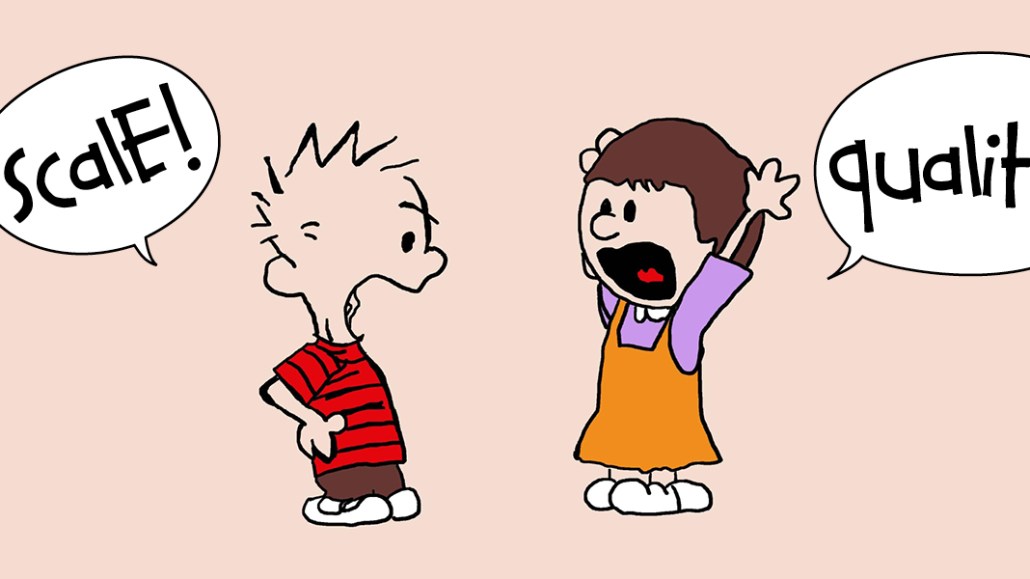 Condé Nast exec and Interactive Advertising Bureau chairman Jim Norton got a hero’s reception at the IAB’s Annual Leadership Meeting in January when he called on brands to make sure their ads only appear next to quality editorial content in the face of clickbait and fake news.

Quality may be the rallying cry of 2017, but scale is far from dead in digital media.

Scale counts for ad-driven publishers that are trying to monetize their way to being acquired or going public. And it still matters to those on the buy side. Unique monthly visitors is still the starting point of a conversation with a brand or agency. It’s why some publishers such as Vice still roll up independent sites in their comScore audience total.

“In 2017 ad buying, there still are 20-somethings with comScore spreadsheets that are still making decisions about what should be bought,” said Patrick Keane, president of Sharethrough and former CEO of Associated Content. “As much as brands and agencies, it’s become important for them to surround themselves with traditional household names, they talk out of both sides of their mouths. Scale wins over quality.”

Size matters because of the rise of people-based targeting and importance placed on ad viewability, and it takes scale to play that game, said Geoff Schiller, CRO of PopSugar.

“Of course there’s a focus on quality and the clean supply chain,” he said. “But it’s tough for publishers to deliver on that promise. You’re either there organically or inorganically.”

PopSugar promotes itself as having audience purity — it doesn’t roll up other sites in its comScore number, and in meetings with agencies, Schiller promotes its engagement right along with audience reach. But because of the way agencies operate these days, a lot of reps are crunched for time and just look at the comScore number, which favors publishers with a lot of scale. “Young buyers love us because we write for them, but not every brand does,” he said. “It’s definitely an issue.”

“Big” isn’t what it used to be. It takes more impressions to reach an audience as people ignore banner ads, and publishers fed the demand. People are spending more time on their mobile phones, where the quick scrolling and clicking behavior makes it easier for a publisher to get more audience even if it doesn’t necessarily do anything for engagement.

“I remember when a million uniques felt like something to be proud of,” Keane said. Today, he said, “I do hear agencies saying, ‘I need a minimum of 20 million.’ Ten million is sort of nothing at this point.”

Sophisticated buyers don’t stop at audience, though. “The smart advertisers are going to look at video-view completions,” Keane said. “Are they MRC-accredited? Is this a real audience? Is this a real pageview?”

While it’s true that reach is just as important as ever, so is quality, said Ben Kunz, svp of marketing and content at Mediassociates. The shift to programmatic ad buying brings the risk of fraudulent traffic and ads showing up on sketchy sites, so agencies have to use tools and procedures to make sure campaigns are reaching their intended audience and measure how engaged that audience is.

“You need to have reach, but you need to control for the quality,” he said.