With Cooking, The New York Times takes another stab at a paid spinoff 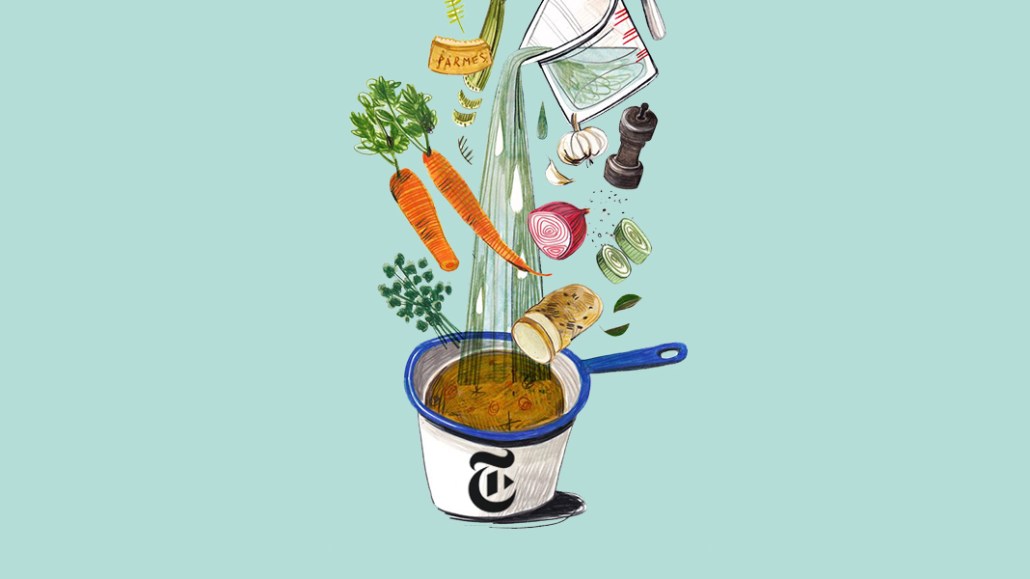 This past week at the Cannes Lions, New York Times CEO Mark Thompson said the publisher would be able to get to 5 million paying subscribers.

That’s a remarkable turnaround for a company that had spent decades focusing on maximizing revenues through advertising. (It currently has about 2 million digital subscribers.) But the Gray Lady is still finding its way when it comes to building out other paid digital products, and its latest attempt, a paid version of its food-focused property, Cooking, shows that a shift in thinking might have paid off.

“We spent a lot of time growing a top-of-the-funnel audience,” said Amanda Rottier, Cooking’s product director. “We felt pretty strongly that, particularly in the world of food and recipes, we needed to really grow a large audience and scale our users, and we knew if we put up a paywall early, that wouldn’t be the case.”

Cooking was one of the first products to emerge from Beta, a program inside the Times designed to incubate standalone paid products that it might turn into sources of user revenue. While there have been a couple successes — Crosswords, which became a standalone paid product in 2012, generated $2.9 million in the first quarter of 2017 — some of those initial forays struggled. NYT Opinions, a paid product oriented around the paper’s high-profile opinions staff, barely lasted three months as a mobile app before it was scrapped; NYT Now, a millennial-targeted mobile app, was shut down last August after failing to build beyond its small, but dedicated audience.

Cooking began doing audience testing and market research back in 2014, with the hopes of launching right away. Instead, it slowed down, so even though the actual product the Times brought to market looks about the same as the one it thought of launching three years ago, its users are now reliant on it.

Its newsletter, penned by Cooking editor Sam Sifton, has amassed 1 million subscribers, making it the second-largest newsletter of the 50 the Times offers. Cooking has rapidly grown its base audience in the past year, from 7 million monthly uniques to 10 million monthly uniques, partly by repackaging and modernizing recipes from its archives to make them more likely to travel well on social platforms like Facebook. Times subscribers comprise approximately 10 percent of Cooking’s reader base, a share that’s grown slightly in the past couple years.

The goal with all of these efforts was to grow a base of people that returned on a regular basis. Newsletter readers are more than twice as likely as regular readers to become subscribers to the Times itself, and Rottier said those return users were just as important, though she declined to share specifics about how many Cooking readers were returning users.

This is not the first way the Times has tried to monetize Cooking. Last July, it launched Meal Kits, a partnership with Chef’d from which readers could get ingredients for specific dishes delivered to their homes. That product, which Rottier described as “an experiment,” is not part of the Cooking subscription offering. “We’re thinking about ways to integrate it,” she said.

“We did a lot of research into what we’d actually charge for on Cooking. … [Meal Kits] is not something we saw that was at the top of the list.”

Cooking is going to be as patient as possible with both new and established readers. “Where the pendulum seems to be swinging a bit is giving a long period of opportunity and a long timeline for readers to try something,” said Rick Edmonds, media business analyst at The Poynter Institute. “That would appear to be the Times’s strategy. It doesn’t have to be for everybody, but for some sliver that will pay up.”

https://digiday.com/?p=243695
Most Read
Trending in Beyond Ads
Digiday Top Stories