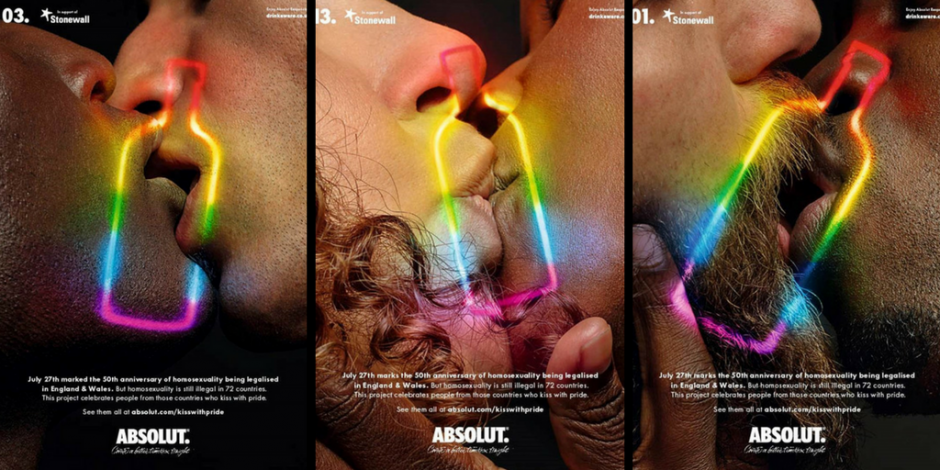 Dove, McDonald’s and Pepsi have all run ads in recent months that touched on hot-button issues including breast-feeding and protests, only to have them backfire. That’s left even those marketers with a long history of aligning themselves with causes worried that people have become too cynical to believe they’re for real.

Take Absolut. It’s been a steadfast supporter of the LGBT community for the past 30 years. Yet when it launched its latest BBH-created ad, which featured men and women — young and old, from all walks of life — taking part in a choreographed kissathon, its marketers wondered if the ad would be met with the same outrage Pepsi faced.

Fans of the brand who recalled Absolut’s other contributions to the community over the last three decades stood by it after the ad launched. Still, marketers now have to weigh these risks before deciding to link their own brands with social values. If Absolut makes social issues a bigger part of its marketing, it knows it has to back it up.

“Nobody knows that more than 40 percent of the glass we use is recycled or that we feed 40,000 cows and 250,000 piglets [with the wheat residue left over from the mash after distillation], but if tomorrow we were to talk about sustainability, then there’s a reason for us to do it,” Absolut’s global brand director, Gaia Gilardini, said.

Telecommunications firm O2 is dealing with the risk by taking a closer look at its marketing. In April, it launched the O2 Planning Hub to help its agency teams in part plan for public backlash to its marketing. This hub includes brand, media and CRM specialists and works together from one office three days a week. O2 also is scrutinizing its campaigns more closely to identify the consumer benefit, said Ian Cafferky, director of brand and marketing communications at O2. “At every stage of the campaign-planning process, we are asking, ‘What is the benefit to the customer?’ and KPIs are set accordingly. We seek to balance rational and trading KPIs with higher-order ones around brand love.”

Brands can misfire. Between 2011 and 2014, Diageo tried to associate its Baileys brand with “female empowerment.” It soon found people didn’t want Baileys to empower them: Baileys is now back to being sold as an indulgence. Diageo recently elevated its director of culture and entertainment role to help avoid such mistakes, hiring Anne Nosko, who operates at a director level across the company and has media responsibilities.

Mindshare’s strategy director Rosie Kitson and client director Robert McFaul, who make up the agency’s brand purpose consultancy, are increasingly meeting with the agency’s clients who have concerns about consumer backlash. The issue is that some brands still align themselves with causes that have no actual connection to their business operations, making consumers increasingly likely to turn on them.

That disconnect extends to the marketing messages themselves, said Sam Conniff, co-founder and chief purpose officer at youth-led creative network Livity. “My criticism of some very vocal brands when it comes to purpose is that they’re trying to suggest that this is a new kind of marketing, but these external narratives are not providing sufficient cover to the ground troops of these organizations who are still in a retail ground war, and they are fighting it out on price and promotion,” he said.