The Boston Globe, like many publishers, wants to send breaking news notifications directly to people’s phones. But when it explored the options on the table earlier this year, it hit a wall: Tweaking its app or assigning developers to plug into another platform was shaping up to be a big drain on resources.

In the end, Facebook Messenger was the cheapest and easiest route, said Matt Karolian, director of audience engagement at the Globe. The paper began pushing out notifications on the platform just last week and already is seeing an 80 percent open rate.

“You can stand on the shoulders of Facebook,” he said. “It’s affordable to implement, it’s cross-device. People use Facebook a ton. Facebook is across all your devices. You have a lot more targets to hit.”

While a lot of its publishing brethren have fired up chatbots on Messenger, the Globe decided to just push out one-way notifications. The Globe tried a text messaging-based chatbot during the election. But most chatbots aren’t sophisticated enough to process natural language, and publishers don’t have the technology to dig deep enough into their content to really personalize their article recommendations. For the same reasons, a number of brands have cooled on chatbots.

“The AI isn’t fully there yet,” Karolian said. “You’re very aware you’re talking to a computer.”

It’s a problem familiar to bot developers everywhere. “It’s difficult to be able to write content that feels fresh and not go down a dead end,” said James Cooper, head of creative at Betaworks, which developed Poncho, a weather bot, and a bot platform called Dexter. “Publishers want to investigate it, but they don’t have the resources.”

A basic bot can be done inexpensively, but it takes resources to fully commit; Betaworks has a team of about eight writers and engineers on Poncho. And whether you’re doing notifications or a bot, if you aren’t getting more personalized, self-selected alerts, they won’t be very valuable to users, said Travis Bernard, director of audience development for TechCrunch, which was early developing a Facebook Messenger bot. Meanwhile, just pushing notifications can risk overkill if publishers do it too often.

The Globe seems to have danced around these mines by pushing out pieces from its investigative Spotlight team that readers won’t find anywhere else: 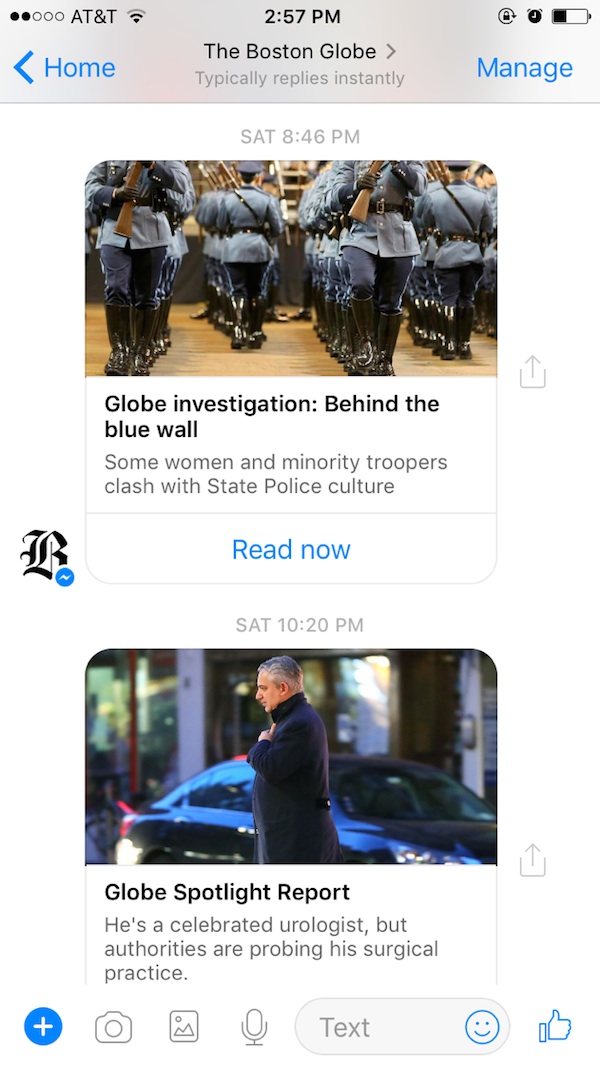 The publisher said its Messenger approach will get a big test during this week’s blizzard. It’s just gotten a few hundred signups since launching the service last week (albeit with very little promotion). Of the 80 percent who are opening the notifications, 15 percent are clicking through, while the opt-out rate is down in the single digits.

Using Messenger is also part of an effort by the Globe to wring more out of Facebook’s huge audience this year. It’s already started a private Facebook group to let subscribers discuss the news. It plans to use Facebook’s 360-degree video for its Boston Marathon coverage. As the Globe sees it, this is a way to insulate itself against a Facebook strategy or algorithm change, so if Facebook, say, downplays news content in the news feed, the Globe can still reach audiences on the platform in other ways.

“These are huge parts of Facebook that publishers are not taking full advantage of,” Karolian said.

https://digiday.com/?p=227292
Most Read
Trending in Publishing in the Platform Era
Digiday Top Stories