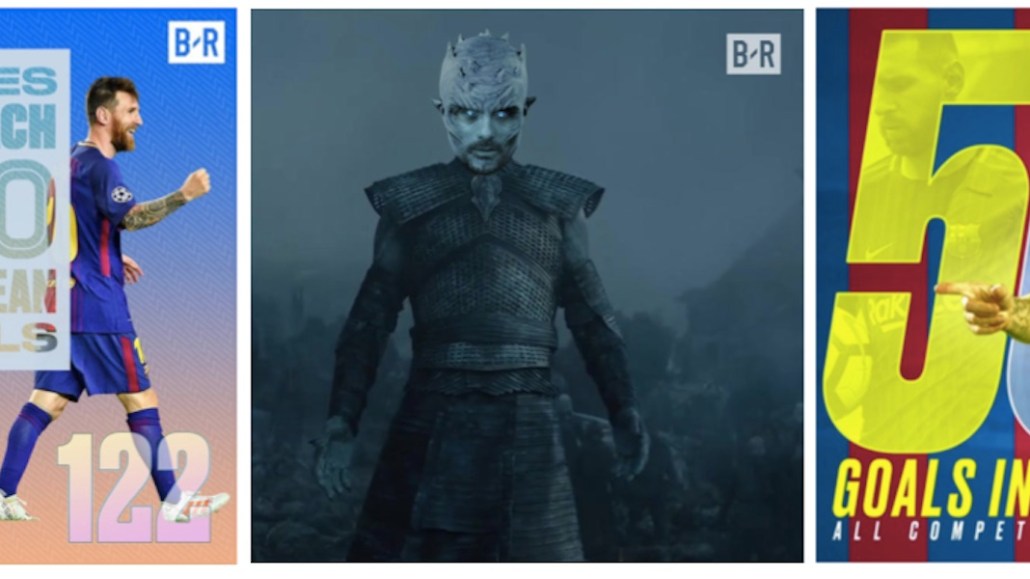 Bleacher Report Football, which has 667,000 followers, published 894 photos and videos on Instagram in April, according to NewsWhip data. In total, these generated 10.4 million engagements, a catch-all term NewsWhip uses for likes and comments. In September, the account posted just 39 more posts than in April, including a dozen carousels, but the engagements across these posts more than doubled to 26 million in total.

“Instagram we’re the most excited about,” said Lee Walker, global managing editor at Bleacher Report. “Across the board, it’s the platform where we get the most engagement. It sums up our mantra of elevated storytelling through great visuals and design. We are seeing increased interest in Instagram for branded content from clients right now.” The publisher was unwilling to share how much revenue this brings in, however.

“We see Instagram as a perfect way for some of our brand partners to connect with our fans,” said Walker. “There is a lot of potential here on both the revenue and audience side.”

This month, Bleacher Report appointed Gideon Reeves, formerly at 90min and Eurosport, to the newly created role of international commercial director in the U.K. to accelerate commercial opportunities in the U.K. and Europe. In total, the U.K. outfit is 32 people, with three in sales roles; the rest are editors, mobile and video specialists, social media editors and designers.

Bleacher Report Football’s content falls outside the commodity of scores and highlights, tapping into culture beyond sports, like film, TV, music and fashion. This makes the content more relevant and shareable, said Walker. Bleacher Report takes a distributed approach to content rather than using platforms to drive users back to its site. Its social team of 14 people, who work across platforms, publishes 30 pieces of content on Instagram a day. Instagram content is often video or animations with graphics and stop motion, like one putting football players into scenes from “Game of Thrones”.

The publisher said its engagement rate on Instagram — the number of likes and comments divided by follower count — is 4.3 percent in 2017, nearly five times that of competitors. Bleacher Report Football has 670,000 followers; in comparison, BBC Sport, whose coverage is broader, has under 1 million followers, and football site Goal’s global account has 1.8 million followers.

Bleacher Report is not alone in its Instagram high: NewsWhip analysts said they have seen engagement grow significantly across the board for publishers. It’s hard to pinpoint why, but the platform’s increase in users — it doubled monthly active users to 800 million in two years — plays a role. Publishers like millennial women-focused site Bustle is doing four times as many branded-content deals a month on Instagram versus a year ago, but in general, making money from platforms like Instagram outside of branded content is a struggle.

“What’s clear is that [Bleacher Report] is investing heavily in content specifically for social platforms, which is different to other sports networks,” said Katie Manor, head of paid social at MediaCom. She added that the publisher’s decision to rename its social media handles to “Bleacher Report Football” in March to reflect a focus on the sport, plus expand football beyond the U.K. in the vast category of sports publishing was a shrewd move. “This gives them a lot more opportunity to own the space and have an authoritative voice on their subject matter,” she said.

Walker will outline how Bleacher Report engages its audience in Berlin next week at Digiday’s Publishing Summit Europe.

https://digiday.com/?p=259686
Most Read
Trending in Publishing in the Platform Era
Digiday Top Stories