This story has been corrected. The original version stated Blasting News pays up to €11 per article and implied its distribution method is against Facebook rules.

Facebook traffic hacks come and go. Crowdsourced publisher Blasting News, which produces a staggering 23,000 general-news and entertainment stories a month in 24 languages from a network of 2,500 contributors, is paying people — the company calls them “selected digital influencers” — to distribute its content through niche interest groups.

Since last June, Blasting News has recruited roughly 1,000 people who manage groups, mostly on Facebook, on topics covered by the news and entertainment site, like politics, lifestyle, health, beauty, technology and entertainment. Group owners — largely based in Brazil, but a growing number are coming from France and the U.S. — are vetted by the company, Blasting News said.

“It’s not an open program, and we don’t want it to be because we know it could start spamming people,” said Andrea Manfredi, founder and CEO of Blasting News. “We’re doing this in a healthy way; it’s sustainable and legitimately good for readers.”

The company attributes a lot of its growth from the second half of last year to the distribution led by these “social blasters,” which drives clicks back to the site. The Blasting News Facebook page itself only has a small following of 50,000. According to Manfredi, if the quality of traffic brought back by the social blaster is low, such as high bounce rates and low dwell times, they are kicked off the program. As groups are closed, viewing how people engage within them is not easy. ComScore figures for Blasting News in the U.S. show that unique monthly visitors to its own platform doubled to 3 million in July. Global figures are a lot higher. Most of its traffic is driven by Brazil, where in January comScore ranked it as the is the second-most popular general-news site.

Blasting News doesn’t have a huge sales force, but a core global team of 36, a mix of tech, commercial and content managers. Instead, it taps into programmatic ad exchanges. Visiting a Blasting News article can be a bracing experience, with content confined to a narrow well, hemmed in by in-banner video, multiple display ads, several Taboola widgets. A site redesign is coming later this year. 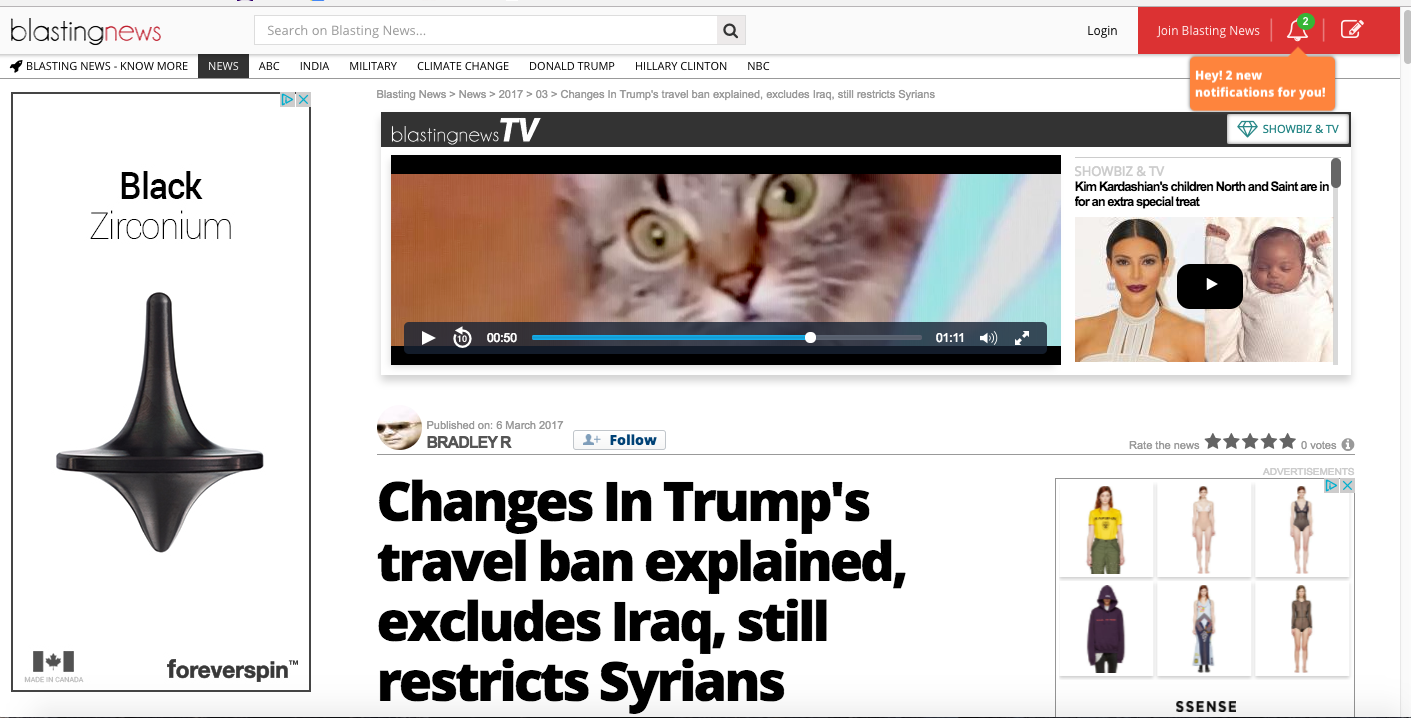 The company was unwilling to disclose how much money it pays group owners. Blasting News has a contributor network model where its global 2,500 writers are paid on average €11 ($11.70) per article, in some cases up to $500, based on traffic generated and engagement metrics. This earned it funding from Google’s Innovation Fund. According to Manfredi, all stories are checked first by a proprietary technology that detects plagiarism, and then fact-checked and curated by one of the 200 senior editors of Blasting News team, before going live. In January, 5,000 submitted stories never made it to the site. The price you pay for having thousands of contributors is that some sources deem it “untrustworthy,” despite Manfredi stressing it has a zero-tolerance attitude to fake news and click-baiting.

This hyper-targeting via micro-influencers in closed groups means the content is less vulnerable to algorithmic changes than elsewhere on the platform. “That tool sits in the context of Facebook pages, not in the dynamic of the groups,” said Josh Robinson, creative director at agency Synergy.

In any case, reach-thirsty publishers would set a cap on themselves targeting closed groups. “The most successful use cases with influencers are a hybrid of reach and engagement,” said Jenna Walker, head of content and creative at agency Socialyse. “Closed groups, you might think they have more engagement. The only problem is when it is irrelevant or intrusive.”