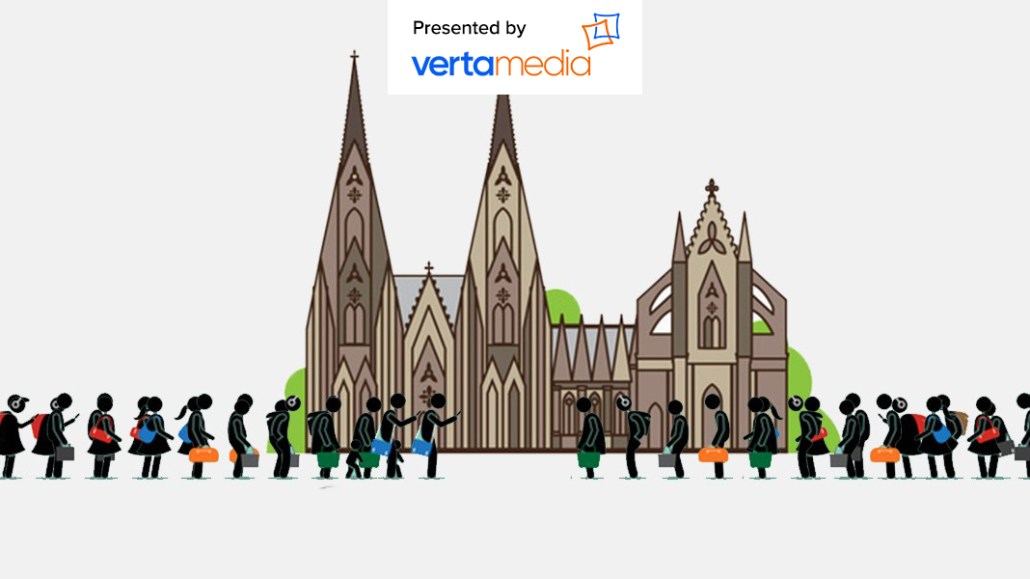 Digital marketing’s global tentpole event Dmexco begins next week, and more than 50,000 people from around the world will descend on Cologne, Germany, for a whirlwind of meetings, networking, panels and presentations, along with heavy consumption of beer, bratwurst and pork knuckles. We asked Dmexco veterans to share their best hacks for the festival.

No train, no gain
Some London-based industry vets avoid the crowded airports and take the Eurostar train from St Pancras station to Brussels, where they transfer to the ICE train to Cologne. (There’s no direct train to Cologne.) “It’s extremely civilized and stress-free compared to flying,” said Dan Wilson, vp of monetization for mobile ad tech vendor Blis. “It’s almost as fast as flying by the time airport dead time is factored in, it’s a fraction of the price and it’s the right mix of being able to work in peace without someone staring at your screen.” Plus, the ICE train usually picks up a crowd of European publishers and agencies, so the buffet car is great for networking.

All aboard the BidSwitch Express
Ad tech vendor BidSwitch’s Dmexco trademark is booking multiple train cars of the London-to-Brussels Eurostar for clients and employees. BidSwitch’s guests travel in first-class cars on the Eurostar to Brussels. They then partake in a boozy lunch before catching the ICE train to Cologne for the second leg of the trip, which tends to be when the beer flows more freely. By the time the train arrives in Cologne, people are in a cheery mood.

Stay in Düsseldorf
Rather than booking a hotel in Cologne, where the prices are far higher than usual during Dmexco week, some stay in a nearby town. It may seem counterintuitive to stay in another city, but the train from Düsseldorf to Cologne takes about 20 minutes, faster than most cab journeys across Cologne. An added bonus: dodging taxi queues. Some now fly into Düsseldorf rather than Cologne for the same reasons.

Be smart about meetings
Most vendors set up meetings with clients months in advance, so trying to arrange last-minute meetings will only end in disappointment. The hall floor plan is your friend. Although Dmexco is more business-focused and corporate than Cannes, it’s still a booze-y affair, and planning early-bird meetings midway through the conference is bonkers. “Plan your most critical meetings [in the] late morning/early afternoon, particularly if you know your clients will be having a heavy night before,” said Azad Hosenbokus, director at video ad tech vendor Coull. “Ideally, get your most critical appointments in on the first day.”

Dodge long taxi queues
Like any massive conference, leaving at the end of the day can soon become a nightmarish sweaty scrum. Although there’s usually an army of sponsored rickshaws dotted around the Dmexco venue, Koelnmesse, they get nabbed fast. A better tactic is to plan late meetings and drinks that go well past the typical 5 p.m. cocktail happy hours held at the stands in the expo. Most of the delegates will have left by the time you leave, and you’ll avoid the long taxi lines. When arriving for the day, advise your cab driver to drop you off nearby and walk to the venue to avoid traffic.

Prioritize your health
Because Dmexco is just two days, people tend to stuff meetings into every moment of daylight, which makes for a bleary-eyed few days. The natural instinct can be to load up on coffee to make it through, leading to caffeine jitters. Avoid alarming potential clients with red-eyed, jittery ad tech sales pitches by opting for natural juices or water instead. Another pro tip: Take aspirin with a glass of water before bed, no matter how late it is. Your body will thank you in the morning.

Use caution with data-roaming
International data-roaming packages come in handy, as Wi-Fi will always let you down, regardless of what services you’ve paid for. “There are too many Wi-Fi signals competing for it to work,” said Fran Cowan, marketing director at ad tech firm Inskin. “So, make sure you have video backups of any live demos, and also make sure your phone package isn’t going to destroy your wallet for using data in Europe.”

Plan bathrooms breaks beforehand
Dmexco is like navigating Glastonbury Festival in terms of logistics, and that goes for bathroom breaks, too. Scout out the less-frequented bathrooms before the conference starts, especially the ladies’ rooms, where lines are typically the longest.