The worst influencer marketing fails of 2018 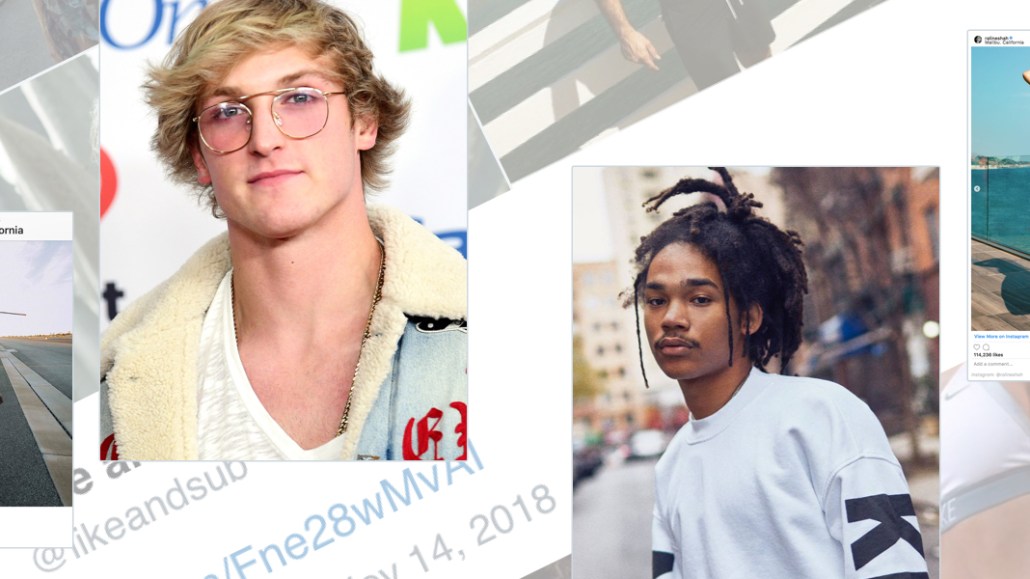 As influencer marketing matures and influencers take on stricter, longer-term contracts, the fails and flops with the marketing practice have become more pronounced. With brand-safety and fraudulent-follower concerns, influencers are being held to higher standards and less leeway is allowed.

This year came with a bevy of influencer marketing fails that point to just how the space is evolving and how closely influencers are being watched.

Logan Paul unleashes more brand-safety concerns with YouTube
On the first day of 2018, YouTube influencer Logan Paul’s video, “We found a dead body in the Japanese Suicide Forest,” was pulled down from YouTube after generating more than 6 million views. The video, which showed Paul standing next to a dead body, immediately sparked a public outcry and made brands question a platform that already had its fair share of brand-safety concerns. YouTube temporarily dropped Paul from its Google Preferred program and several projects were dropped with Paul losing several brand sponsors. However, 10 months later, and Paul, with 18 million subscribers on YouTube, is still making a profit from ads running on his YouTube channel and his merchandise line Maverick. Forbes placed him as No. 10 on its Highest-Paid YouTube Stars list after he made $14.5 million in 2018.

The California wildfires become promotional
As wildfires ravished California in November, influencers proved how opportunistic they can be. Some influencers used the disaster to self-promote their own profiles and discounts from companies they partnered with using locations and keywords related to the fires, as well as hashtags like #coasttocoastlove and #californialove. Followers and outside voices showed their disgust with the self-promotion.

we want to thank all of the brave influencers who have donated completely unrelated thirst traps to the victims of the california wildfires pic.twitter.com/3H76x4QtxT

Snap sues its own influencer, Luka Sabbat
One of this year’s biggest influencer fails proved, at least, that influencers are finally being held accountable for the deals they sign. On Oct. 30, PR Consulting, on behalf of its client Snap, sued Luka Sabbat over a Snapchat influencer campaign for its Spectacles product. Sabbat, model, actor and influencer with over 1.5 million followers on Instagram, was promised $60,000 for posting a minimum of four posts to Instagram and wearing Spectacles during Fashion Weeks in Milan and Paris. Sabbat didn’t deliver, even though Snapchat paid Sabbat $45,000 upfront. While the lawsuit certainly hurt Sabbat’s reliability, it also revealed an embarrassing fact about Snapchat — that it was running influencer campaigns on Instagram Stories, the feature Instagram copied from Snapchat and used to overtake the platform in the market, said Eyal.

“Tanacon” becomes a catastrophic take on VidCon
In June, Tana Mongeau, a YouTuber with 3.5 million followers, threw her own VidCon after expressing her disgust for the event. She called it “Tanacon” after herself and promised appearances from famous YouTubers like Casey Neistat, Bella Thorne and Miranda Sings. Mongeau gave away free tickets and sold VIP ones for $65, which were supposed to give fans access to meet some of their favorite YouTubers, gift bags with signed memorabilia and a concert. Attendees were disappointed: The gift bags contained nothing but stickers and condoms, and fans found out they had to RSVP online for meet-and-greets and those even had a cap. But many of the thousands fans who showed up didn’t get to experience anything — the event was shut down within six hours for overcrowding a 5,000-person venue. According to Mongeau’s tweets, 20,000 people showed up.

Floyd Mayweather and DJ Khaled are sued for promoting a cryptocurrency scam
A lawsuit from May showed that influencers may also be held accountable for their roles in sponsoring illegal companies. TMZ reported in October that boxer Floyd Mayweather Jr. and rapper DJ Khaled were being sued from investors who sunk $32 million into Centra Tech, which called itself a company that sold financial products related to cryptocurrency, and whose founders were charged in April with defrauding investors. Mayweather and Khaled, who both signed endorsement deals with Centra Tech, encouraged people to buy the coin with Twitter and Instagram posts.

Cîroc ads violate FTC influencer rules
This month, advocacy group Truth in Advertising collected 1,700 Instagram posts promoting Cîroc Vodka from 50 influencers, including stars like Diddy, Ashanti and French Montana, and found the posts did not disclose the paid partnership clearly with either #ad or #sponsored hashtags. TINA wrote a letter to the FTC about the violations, and Cîroc received a lot of bad press for the mishaps. If the FTC takes action, that is another thing. It has only enforced its guidelines on undisclosed endorsements a couple of times, and only toward companies and not individual influencers.

Instagram influencer nets nearly $200,000 from “scam” class
Aggie Lal @travel_inhershoes, with nearly a million followers on Instagram, started a 12-week course called “How to Grow Your Instagram,” which promised to teach students how they can become a travel blogger earning six figures. She charged $500 dollars for a class, and from that grossed nearly $200,000 from 380 people who signed up. Participants told BuzzFeed News the course was a scam and fell short of expectations. Many participants also balked at Lal’s “test” to sell the course to their own followers with affiliate links.