Walmart goes after city folk with rebrand of Jet.com 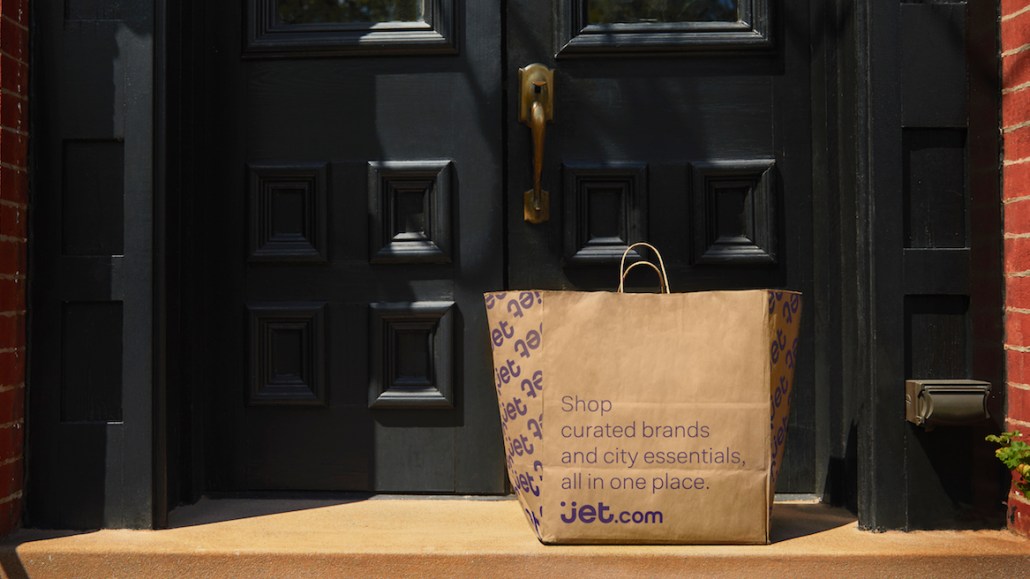 With Amazon dominating online shopping, including, Walmart is trying to compete by selling more premium brands and products across Walmart.com and its delivery service Jet.com.

Jet.com has been going for affluent, urban millennials by delivering goods from local shops in cities where Walmart lacks a presence, such as New York City. Today, it’s taking a step further with a new site, more partnerships with local brands, new delivery options and its first urban campaign to drive its position home.

“We’ve thought through every aspect of the business to how we can tailor experiences and assortment that would best fit city customers, which has traditionally been a departure from where Jet has been in the past,” said David Echegoyan, chief customer officer at Jet.com.

With the rebrand, site visitors will see images and messages tailored to the city they’re in, starting with New York. There’s heavy promotion of local businesses on the homepage and grocery section as Jet expands its partnerships with local sellers and features them on top of their respective sections. Someone from New York, for instance, can expect to see products from Pat LaFrieda Meats, Orwashers Bakery and Big Gay Ice Cream.

“Customers care about supporting local brands and businesses much more than they ever have, so this creates trust with customers in a way other retailers haven’t done,” said Simon Belsham, president of Jet.com and svp at Walmart.com and a Tesco veteran.

Jet is also promoting itself with a localized campaign beginning in New York, Boston, Philadelphia and Washington, D.C., today and running through December. Called “Our Carts Are Different Here,” and created with Pereira O’Dell and production studio Arts & Sciences, the campaign will include TV, out-of-home, audio, digital and social. It will highlight items people buy in their neighborhoods.

Cooper Smith, director of Amazon research at research firm Gartner L2, said the rebranding signals that Walmart, via Jet, is willing to take big risks and spend big in its fight against Amazon.

The new approach is a big change to Jet’s low-cost approach before it was acquired by Walmart for $3.3 billion in 2016. To compete with Amazon and its growing grocery delivery business, Jet.com had to increase its own output. But grocery delivery is expensive. The fastest way to increase the average order is to sell specialized (more expensive) products from local companies, said Tom Gehani, director of client strategy and research at research firm Gartner L2.

L2’s Smith said focusing on local markets might be an odd fit for cost-cutting Walmart, but with Jet, it can go after customers that aren’t just looking for the lowest price.

“It’s an opportunity to play on those peer-to-peer networks in these neighborhoods as well,” said Gehani. “There is absolutely a growing trend within mega cities to have a little local pride.”

The question is how much people will be willing to pay more for local businesses when they can get national brands cheaper. Manhattan restaurant The Meatball Shop sells its marinara sauce on Jet.com for $7.99, while Prego’s costs $4.97 on Amazon. Jet is betting that a customer living in New York will want to spend that much money on sauce because they know the restaurant and want to support it.

Jet is still growing its partnerships with big brands. In October, the company will begin selling hundreds of Nike and Converse products. Gehani said Jet still has an opportunity to appeal to consumer-goods makers like Nike that are looking for alternatives to Amazon.

“They know if they partner with Amazon, it’s a short-term win, but in the long-term, they know Amazon could steal their business through their private label strategy,” said Gehani.