‘Bringing those experiences’: Why Verizon will use Fortnite, digital activations to boost Super Bowl spend 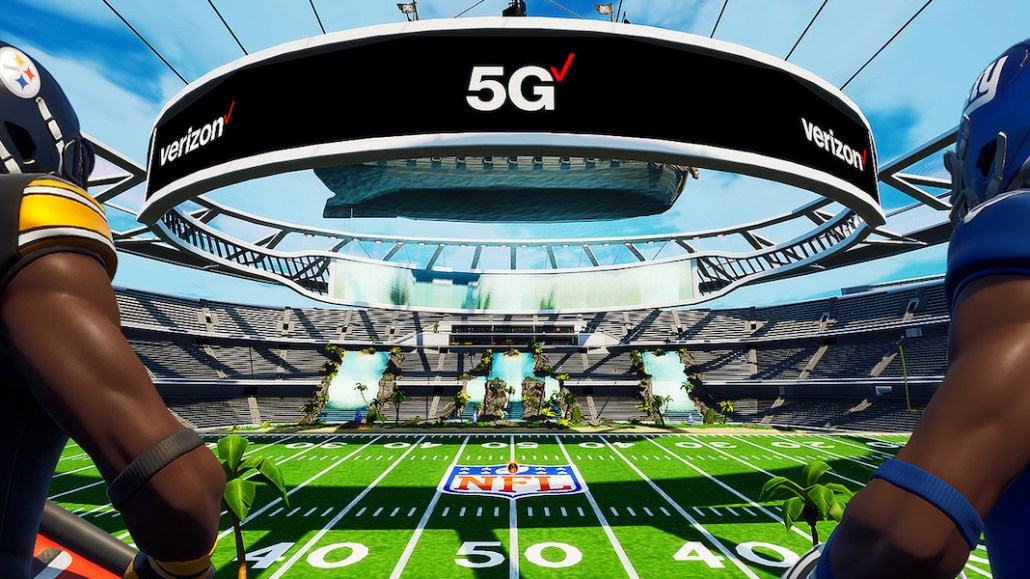 With heavy restrictions on in-person events and gatherings due to the continuing coronavirus crisis, advertisers have turned to new ways to connect with a socially distanced audience during marketing’s biggest day of the year.

Verizon, for example, is returning to the Super Bowl for the fourth year in a row with a 60-second in-game spot, focused on its 5G technology. But this year, the wireless company is also introducing a few initiatives to make the fan experience accessible from home, including a digital activation with Fortnite, an in-app experience with Yahoo Sports and a Twitch activation as well as a virtual concert.

There’s also the Verizon 5G SuperStadium in the NFL mobile app that allows fans to see several different camera angles, whether at home or in-person at the Super Bowl. It comes with AR tech that shows Next Gen Stats for players.

“We’re giving people the opportunity from home to have a similar experience to what you would have in a stadium,” said John Nitti, Verizon’s chief media officer.

Building in the virtual world comes with a tighter and closer production timeline, according to Nitti. But at the same time, the virtual space comes with the ability to reach more people. (Verizon declined to provide details on digital ad spend for this initiative.)

“The scale of who we can reach and impact, and bring together has also changed as well,” Nitti said. “You’re bringing those experiences that used to be for a lucky few in the tens of thousands to hundreds and thousands and millions of people as well.”

In a world sans-Covid, Verizon would host “a huge experience for consumers to experience 5G and be entertained” during the week leading up to the Big Game in-person. That experience was set to launch online Monday with a virtual stadium within Fortnite. Virtual worlds are becoming increasingly more attractive to marketers due to lofty engagement numbers. Last year, Digiday reported one Fortnite event brought in a record 15.3 million concurrent players with more than 3.4 million watching along on Youtube and Twitch.

And with the coronavirus keeping most people at home and in front of screens, connectivity is critical. And as a wireless company, that puts Verizon front and center, said Nitti, who noted the technology Verizon is offering as part of their Super Bowl virtual experience was only just budding last year, but the health crisis sped its roll out.

“It accelerated the planning… because there’s an actual, physical need to have access and these enhancements to the live experience,” he said.

Verizon isn’t the only brand that had to make adjustments due to the pandemic. DoorDash, a first time advertiser in this year’s Super Bowl, noted overall production costs have risen at least 20% to make space for Covid testing and deep cleaning, which makes for a longer production process.

“Consumers and viewers, due to Covid, are more conditioned to this type of activity and behavior than ever before,” Thompson said.

“There is only one day a year with the potential reach of tens of millions consumers, information and content consumption habits have literally shifted overnight due to Covid,” Thompson said, via email. “And there’s no time like the present to strike while the iron is hot in this environment.”