‘A lot of internal churning’: Inside United’s PR crisis cleanup

After the company became embroiled in a scandal for forcibly removing a 69-year-old doctor from an overbooked flight earlier this month, it initially issued a tone-deaf response that blamed the passenger for being “disruptive and belligerent.” What made matters worse for United is that this snafu was preceded by its refusal to let two teenagers wearing leggings board a flight, which together kept the company in the news. But the airline has been trying to make amends.

Yesterday, it embarked on a multimedia quest to convince people it is taking responsibility by changing its overbooking rules. United announced changes to its customer-service policies. People getting bumped from flights can now receive up to $10,000 in rewards, up from $1,000. The airline also pledged to reduce its amount of overbooking. And it reached a settlement with the doctor who was dragged off the flight. The amount of the settlement was not disclosed.

“They are clearly trying to pivot toward the future,” said Andy Gilman, president and CEO of crisis communications firm CommCore Consulting Group. “Almost in every crisis you hit a bottom point, and then you can begin to recover.”

United sent email blasts promoting its new policies to its customers. CEO Oscar Munoz went on the “Today” show, where he called the snafu a “system failure across the board.” United also ran native ads on websites, including Axios, that featured quotes from its CEO and bullet points describing its new rules. The company got dozens of large publishers to write about the changes as well. United did not respond to interview requests for this story. 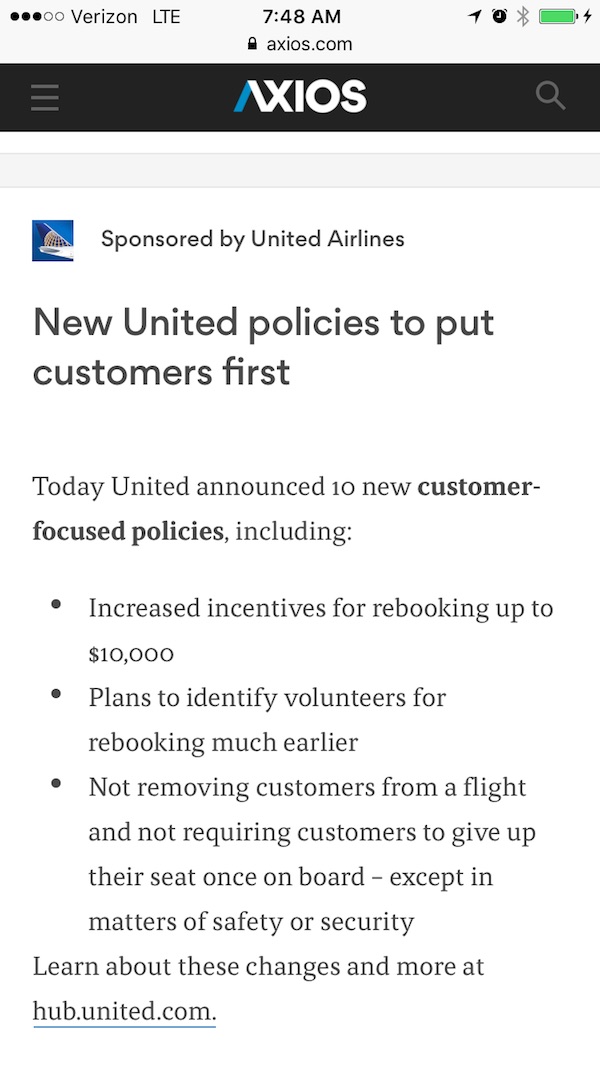 According to PR experts, the airline is finally getting some things right.

“They are certainly taking steps in the right direction,” said Matt Rizzetta, CEO of PR firm North 6th Agency. “On a scale of zero to 10, [United’s PR response] was in the negative a few weeks ago. Right now, they are probably near a four.”

Other brands recently under fire such as New Balance and Uber have done damage control by blanketing social media and paying for search ads so more favorable content appears at the top of Google queries. United’s PR crusade appears to be more specific with its timing, given that its settlement, new rules and native ads all debuted on the same day.

Jonathan Bernstein, president of Bernstein Crisis Management, said United finally learned from its mistakes when it changed its policies. But the company will still be under a microscope for a while, which means smaller incidents will continue to dredge up its passenger-removal scandal in the press for a while. For example, when a 3-foot-long rabbit died on a United flight earlier this week, many of the articles about the topic also mentioned that United was already under fire for forcibly ejecting a passenger.

Since the company will be closely monitored, another instance of passenger abuse could sabotage any goodwill it has built back up, Bernstein said.

“There is a lot of internal churning going on so that they don’t repeat this,” he said.