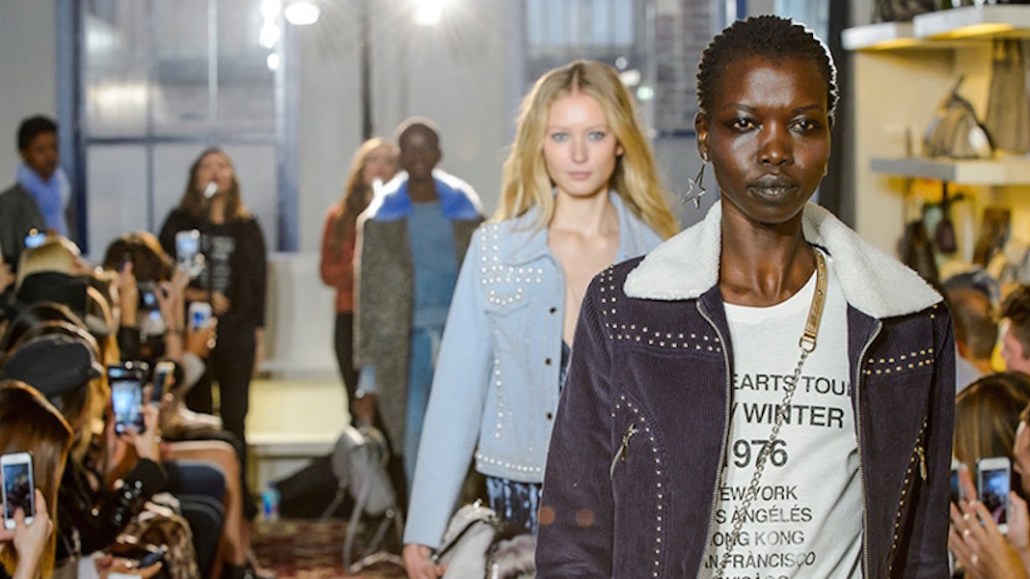 When she made the decision to buck the traditional fashion calendar and show a spring, not a fall, collection in February of 2016, Rebecca Minkoff and her team had under three months to act on it.

First, the company had to find new manufacturers who could turn around small-batch product orders quickly to account for a faster production schedule. The brand, which was manufactured in Asia, diversified its supply chain and partnered with manufacturers in Europe and America that were both closer to home and equipped for smaller volume orders.

Then it had to lay out a new plan with its wholesale partners, which account for about 85 percent of the brand’s sales. This involved an understanding that buyers would see new collections on the same schedule, but in private showings months ahead from when the collection would then be seen on the runway and shown to consumers.

“It was a process, a big transition, and it was a challenge,” said Uri Minkoff, the brand’s CEO. “But there are so many quote-unquote rules in our industry. It’s like ‘Keeping up with the Joneses.’ It’s very hard to make that mental switch. Fear is a big part of it. But today, brands have to find a way to stick out, and I don’t think the old way is the way to do that.”

Since that February, more brands have abandoned the model than adopted it over the past year-and-a-half. (Those sticking with it include Ralph Lauren and Tommy Hilfiger, while Tom Ford is among the detractors.) See-now-buy-now was poised as revolutionary for the fashion calendar, which has felt out of step with consumer behavior for years. What happened?

“[See-now-buy-now] became part of a much broader and ongoing conversation around how the fashion system is changing. The consumer has changed, how people buy stuff has changed, and the designers and brands are rightfully thinking about what it means for them,” said Vanessa Friedman, the New York Times’ style editor. “When this started, there was flurry and debate. But nothing else has changed since then. At the moment, we’re at a place of equilibrium.”

“It was a big, 360 move. They couldn’t pull it off”
When New York-based contemporary brand Thakoon announced it would be going on an indefinite hiatus in March of 2017, it was only two collections and six months after it switched to a see-now-buy-now business model that cut out wholesale partners entirely, selling entirely direct-to-consumer through the brand’s physical and online stores. The brand’s owner, Bright Fame Fashion, released a statement that said the model was ahead of the current retail environment, and it had to restructure.

“Thakoon’s model really was ahead of its time in the sense that it had the whole system worked out: It had two-week releases scheduled, as well as bigger deliveries timed with an in-season fashion show. The price point was right for it. And he had the mindset and the distribution to think ahead and sell right away,” said a source close to the brand. “The internal structure was the problem. Brand recognition and awareness, and a buzz factor was needed for this to work, and that wasn’t happening in a coordinated way. It was a big, 360 move. They couldn’t pull it off.”

With a few exceptions, see-now-buy-now has become polarized at two ends of the fashion industry. Big brands with deep pockets and a mostly vertically integrated supply chain have both the financial and operational means to pull it off — like Ralph Lauren, Burberry and Tommy Hilfiger. At the other end, there are designers who haven’t yet tied up their businesses in large networks of wholesale partners. They’re running small enough businesses that a shift in strategy isn’t going to sink their businesses.

For mid-sized brands that largely sell through wholesale channels, a see-now-buy-now model requires more work to be taken on internally, including distribution and marketing, and such newfound responsibilities can overwhelm ones that aren’t equipped for it.

“The infrastructure and scale is not there for a lot of brands. When you take out the middleman, you’re holding all responsibility, so you have to have a big platform that you can market,” said Elizabeth Stafford, managing director of strategy at the agency Sullivan. “It’s a huge challenge for smaller brands and luxury designers. And alongside that, there’s this friction between scarcity and creating aspiration, because it’s not available on any mass level.”

The new immediacy of fashion
At the end of the day, brands have to move product. And it’s unclear if see-now-buy-now is actually getting customers to buy.

The response from brand representatives at Ralph Lauren, Burberry, Kate Spade and Rebecca Minkoff is positive, but vague. In a 2016 call with investors, Burberry’s CFO Carol Fairweather said that runway sales were a “tiny percentage” of business, but that the company is pleased with the results. Uri Minkoff said that a few items from its see-now-buy-now shows quickly sold out.

Kate Spade CMO Mary Beech said the brand’s first see-now-buy-now venture in February 2017 was successful, but it still switched back to the typical season model this fall.

“We’ve been experimenting with immediacy. Consumers want that, so we want to provide that,” said Beech. “See-now-buy-now is great for engaging the customer and giving her something to shop right then, amid the excitement. But we realized we didn’t need the lift of fashion week to drive traffic.”

In the spring, Kate Spade tested showing two collections: one for sale, and one that would go on sale in the fall. Beech said traffic and sales went up, but she thought that perhaps results would have been even better without the noise and distraction of fashion week. So, in the month of October, Kate Spade is releasing a leopard-themed fall capsule collection (that won’t be shown on a runway), complete with store events and influencer promotions. While the goal of the first experiment was to drive online sales, the goal of this launch is to bring people in stores.

“We saw viable business at our last event, and we set business goals for ourselves for this one. That’s the only reason we would continue [see-now-buy-now] forward. We want it to be successful both from a financial and customer engagement perspective,” said Beech. “We’re looking at how we take that excitement and drive traffic to stores.”

Rebecca Minkoff has similar goals: According to Uri Minkoff, each see-now-buy-now show has prominently displayed a few products that the brand thinks will sell best in the fashion-show setting, including a certain handbag or an Instagram-worthy leather jacket. He said those pieces are always the first to sell out.

The shift to see-now-buy-now doesn’t look like a tidal wave, or a flipped switch. But the need for newness isn’t going away.

“Whether it’s a second collection, an accessory, an influencer capsule, it’s going to be vital for brands to have things available on sale that are new,” said Rachna Shah, a partner and managing director at fashion PR firm KCD Worldwide. “It’s not about changing business models, it’s about adding to them. We haven’t abandoned retail stores, even though there was a point when everyone thought we would. See-now-buy-now is going to become another tactic that brands need to do properly.”