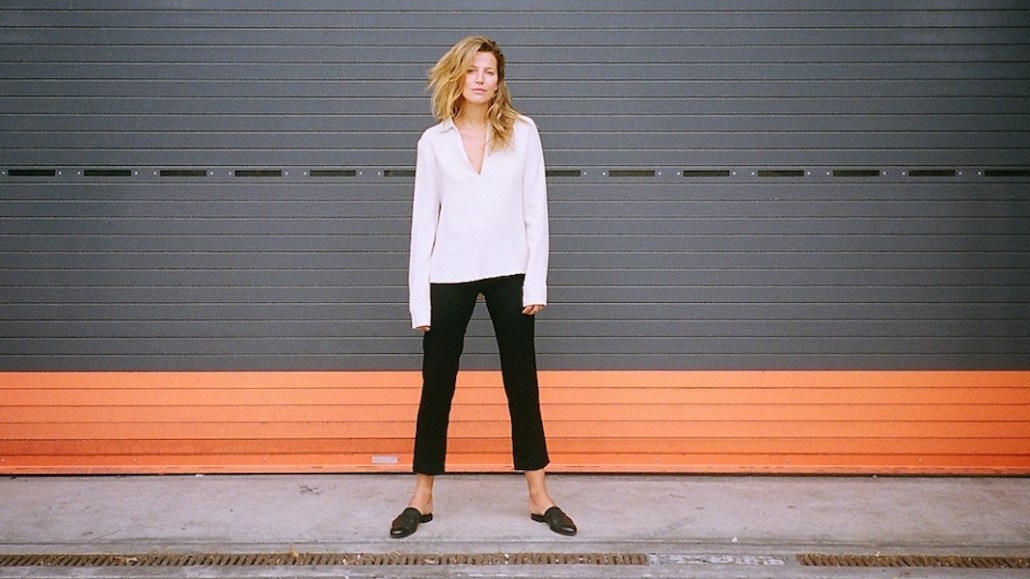 Today, the contemporary luxury brand is launching the first capsule collection for Theory 2.0, an internal initiative to open up new opportunities for employees across the brand’s departments. Over the past 14 months, eight Theory team members from the merchandising, design, e-commerce, retail planning and IT departments worked together on the collection. In a typical process, a new collection starts with the brand’s svp of design and creative director Lisa Kulson, and moves through a linear, hierarchical string of departments before reaching the customer.

Jacqueline Holden, Theory’s senior merchandiser who worked on the first capsule collection, said that the project was unique in that she was forced to think outside of merchandising. The team brainstormed every aspect, from design to e-commerce imagery to distribution, and the resulting workflow was more akin to how a software team develops than how a fashion brand typically designs.

“People across different departments [came] together to get unique experience working collaboratively on every piece and component of a project,” said Holden. “We worked outside of our typical functions.”

Holden and the rest of her team controlled everything around the development and launch of the capsule collection, including the concept, design, imagery and distribution. Mentorship and guidance were provided by executives, Kulson. The collection goes on sale today at six Theory retail stores (out of its 500 global store locations) and also lives on a Theory 2.0 microsite online, which was designed and built by the eight-person team.

Theory, which is owned by Uniqlo parent Fast Retailing and does $800 million in annual sales, is pulling a one-two punch for a modern luxury brand. Through Theory 2.0, it’s upping the cadence of how frequently new products will get to consumers, and it’s fostering talent from within, rather than outsourcing for big-name collaborations that are detached from the brand.

It’s not the first time Theory’s recognized the value in promoting internal talent: Kulson was head of womenswear design before becoming creative director. She replaced the high-profile hire Olivier Theyskens, who left his position as creative director in 2014 after failing to move sales.

With Theory 2.0, which was put into place by CEO Andrew Rosen, Kulson can focus on already-packed annual fashion schedules, which include resort, pre-fall and menswear collections on top of those shown during the spring and fall shows. As pressures mount to get more collections out to customers at a faster clip throughout the year, designers are hitting breaking points.

“Creativity has undoubtedly been affected by the pace,” said Chris Paradysz, founder of PMX Agency. “Designers are realizing that business has to be thought out differently, but there will likely be a moment when they go, ‘Enough.’”

Holden said the team was guided throughout the process by management, and noted that new collections that come from the Theory 2.0 program will be released about every three months without runway fare. The framework for each collection moving forward is the holistic production process, with the same team working on every aspect of the design and launch.

“We wanted the customer to be able to tell that the same vision saw this collection through from the start,” said Holden.

She added that the development of the capsule collection was a side project on top of her daily job, but said that after working across departments to pull something together, she was able to work more efficiently within the merchandising department.

The Theory 2.0 program isn’t limited to capsule collections that will ultimately boost the brand’s bottom line. It will include other initiatives down the road, including an in-house sustainability program that will take a look at the resources used by the brand along with its manufacturing methods.

“Traditional fashion brands are being forced to evolve,” said Laurie de Jong, founder of New York Fashion Week production company LDJ. “It’s been overwhelming for them, and there’s no right or wrong answer, but the ones who survive are the ones who are able think outside of the box and adjust.”