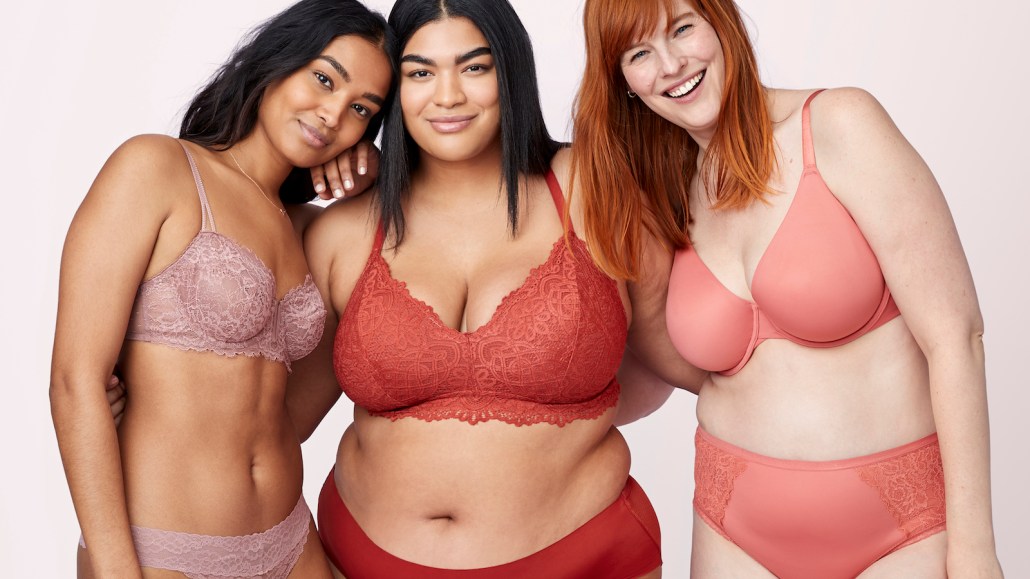 Auden, Target’s new lingerie line, is the product of two industry forces: retailers competing on private-label brands, and a Victoria’s Secret-sized void in the market.

Auden, launching this spring, will offer nearly 200 bras in more than 40 styles, for under $22. The retailer will be phasing out its existing line for lingerie and sleepwear, Gilligan & O’Malley. Along with the launch of Auden, Target will add “Bra Fit Studios” to help customers find the right fit, and is using un-retouched photos of models of all body shapes to promote the line in stores. The retailer is also taking a page from digital upstarts like ThirdLove — which just announced that today that it raised a $55 million round of funding — in creating a Find Your Fit tool that will help customers find their bra size online by asking them a series of questions about how their current bra fits.

Auden is the latest in a long line of private-label brands Target has launched over the past couple of years — a spokeswoman told Digiday that Target’s launched more than 25 owned and exclusive brands since 2016 as part of its private-label push. To compete with Amazon and Walmart, which have their own growing private label businesses, Target is putting more effort in turning high-margin private-label products into fully developed in-house brands. It’s paying off: The retailer’s private-label brands that have crossed a crucial $1 billion in annual sales mark include brands in higher-end product categories like home furniture and women’s apparel.

Right now, the lingerie category is particularly ripe for private-label opportunity. While it’s typically an expensive product to manufacture, consumers are expressing more interest in styles that are cheaper to produce. Last year, data from Edited found that bralettes were rising in popularity more quickly than the traditional push-up bras, which contain more wires and are more expensive to manufacture. Nearly half of the styles in the Auden line will not contain wires.

Kayla Marci, a retail strategist with Edited, said in an email to Digiday that Target’s foray into lingerie is “timely due to the growing demand for this category and the backlash against brands neglecting to promote body-positivity.” The desire among consumers to spend at retailers promoting body-positivity is where Target may have an advantage thanks to its brick-and-mortar locations. It has more space to place private-label branding than an online retailer like Amazon.

But Auden’s price point will put Target squarely in competition with Amazon’s own private-label lingerie line Iris & Lilly, which launched within the last couple of years and sells a variety of bras that run up to about $23. Other retailers are grabbing a larger foothold in lingerie by acquiring e-commerce brands — Calvin Klein’s parent company acquired True&Co two years ago, while Walmart bought Bare Necessities last year. All are looking to take a bite out of Victoria’s Secret’s marketshare, which has struggled over the past year.

The stock price of L Brands, Victoria’s Secret’s parent company, has dropped nearly 43 percent in 2018, and sales for Victoria’s Secret in January dropped by 1 percent year-over-year. In a call with investors during the company’s third-quarter earnings for 2018, L Brands CFO Stuart Burgdoerfer said that two of its bra varieties that receive the most positive feedback from consumers are its T-shirt bras in the mid-$20 range, and its Illusion bra in the mid-$30s. In releasing a more affordably priced line, Target is likely betting that it can use some negative consumer sentiment against Victoria’s Secret’s advertising to chip away at its most popular lines.

“Ultimately, Victoria’s Secret model was just one type of a product for everyone,” Juozas Kaziukėnas, CEO of e-commerce research firm Marketplace Pulse, told Digiday. “Since then [lingerie] has definitely grown vertically into catering for different diversities of people.”