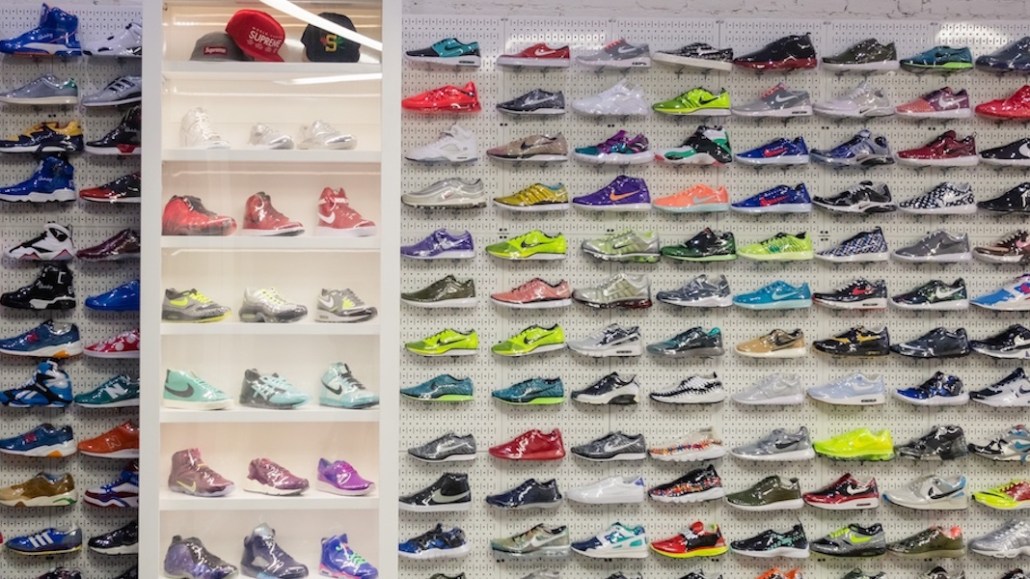 A year after sneaker marketplace Stadium Goods opened in 2015, co-founder and CEO John McPheters had an eye-opening experience in his Soho store. It was 2016, not long after the company’s first standalone retail store opened, when a Chinese customer purchased $10,000 worth of sneakers in cash. He told McPheters he planned to ship all he had bought back to China, where he would resell it.

“That was a real ‘What just happened?’ moment that caught my attention. I decided we had to find the right path to China, because we clearly had a customer there,” said McPheters.

Today, China is Stadium Goods’ second-largest country in terms of revenue, after the U.S. Tmall, the Alibaba-owned platform the company partnered with to launch in the region, is neck-and-neck with Amazon as the highest generator of revenue after the brand’s website. The retailer also works with eBay and Zolando. In 2017, Stadium Goods did an estimated $100 million in revenue, and McPheters said the company is shipping out about 200 to 300 pair of sneakers per day to be distributed through a network of partners in China. The company has a team of five that’s dedicated to growth and strategy in China, and it works with the Shanghai agency Magic Panda to plot localized campaigns and influencer work.

“We’ve barely scratched the surface. Over time, China could easily surpass the U.S. as the biggest country for e-commerce sales for us,” he said. “It’s astounding how much opportunity still exists and how much scale is possible. For now, we’ve built up a foundation: a good-sized audience and recognition for our brand. China has been a first mover for us, and we’re going to continue to invest.”

The trust factor
For Stadium Goods, which sells sneakers that are unworn and are being resold by private owners, the China opportunity is centered on building trust with an eager customer base. The prevalence of counterfeit products is an ongoing problem for Chinese customers, who do a majority of their shopping online.

“Counterfeiting is so common in China that these shoppers can’t even trust that a physical Nike store is selling legitimate products, let alone an online marketplace,” said McPheters.

That leaves a huge opportunity for a legitimate online seller in the streetwear space, as appetite for trends and brands in the region is growing. Overall, China’s highest-spending customer skews younger: millennials ages 25 to 34 account for 65 percent of total consumer growth, according to Boston Consulting Group, a percentage that’s expected to grow by 11 percent year over year between now and 2021. Globally, the streetwear market is worth $300 billion, while the sneaker resale market is worth $55 billion, according to Bain & Co.

And streetwear brands are among the most covetable for China’s young spenders, as the lines between street and luxury fashion blur. (In February, Stadium Goods received an undisclosed investment from LVMH Luxury Ventures.) Locally, the industry is growing: China’s Key Opinion Leaders (influencers) are frequently promoting local designers and brands in the space, like Babyghost, Li-Ning and CLOT. Yohood, a streetwear trade fair put on by magazine and lifestyle company Yoho, brought together 60,000 streetwear fans and 150 brands during a September event in Shanghai.

Tmall has been a “nurturing” partner to Stadium Goods, according to McPheters, and it’s in the company’s best interest. Tmall, along with local competitors like JD.com, has begun prioritizing the fashion that young customers are interested in buying on its massive platform, by building out the Tmall Fashion Pavilion and recruiting global luxury and streetwear brands alike to sell on the platform, as well as supporting local designers with data and distribution infrastructure.

“Fashion trends, before, would appear in New York or Milan, and then a year later, Chinese customers would get a sense of these new trends,” said Jessica Liu, Tmall’s director of fashion, in a previous Glossy interview. “But because of the way media works now, all trends simultaneously hit in China. A lot of young customers are really sensitive about being on top of these trends, so it’s necessary for us to enable immediate purchasing and gratification.”

Tmall emerged as the right partner for Stadium Goods not just for its reach, but because Alibaba has been rigorous with seller standards in the past few years in order to eliminate counterfeits, and the brand pages put creative control in the hands of the retailers. Visiting Stadium Goods’ Tmall site has the same look and feel of visiting its own website, and shoppers can browse sneakers, apparel and other items from brands like Supreme, Air Jordan, Nike, Palace and more. Overall, the catalogue has more than 5,000 products for sale through Stadium Goods.

Catering to the Chinese customer
McPheters said the inventory doesn’t differ too much from what’s available on platforms like Amazon and Stadium Goods’ website, but the company does pay attention to what’s trending among Chinese customers and plan accordingly. Right now, Nike basketball shoes, which aren’t currently super hot in the U.S., are selling like crazy in China, so the majority of the retailer’s inventory in that category is being sent there for now.

The strategy overall is to keep a large inventory selection on Tmall, and then raise brand awareness and push certain products through content series and influencer partnerships. That involves investing in video: Stadium Goods hosts a weekly broadcast that showcases new arrivals and trending sneakers out of the store in Soho, in Chinese and starring Chinese influencers like the actor Kris Wu. While these videos usually result in a sales spike, McPheters said the goal is equally to build trust with Tmall customers by grounding the Stadium Goods name in something tangible, like a New York City store. The videos run on the Tmall page as well as on Taobao, another Alibaba marketplace, and social platform Weibo.

“The Chinese customer is very open to watching retailer videos like that. They’re watching a lot of it on mobile devices, which is where the eyeballs are,” said McPheters. “Some of it’s very product-focused, around what’s new and what’s selling best, but it’s more about that awareness and trust factor.”

Expanding on the foundation
Overall, Tmall has been a supportive partner to Stadium Goods as the retailer ramps up its presence in China by helping connect it to logistics and distribution partners, and sharing detailed customer data — something that’s not reciprocated by Amazon. That direct support from the brand has let Stadium Goods experiment with different selling formats, like 24-hour flash sales and in-app “games” that fit in with the Chinese customer’s shopping behavior.

“Selling in China is not the easiest thing for an outsider; it’s difficult to figure out the ins and outs, but the difficulty is just in the learning process. Tmall was a huge help in that, and now we can pump a lot of volume through the channel.”

Up next, the retailers plans to set up a WeChat store (right now, the brand has a WeChat page, but transactions aren’t yet enabled), more influencer work (KOLs are a far greater revenue driver than their U.S. equivalents) and brand partnerships, according to McPheters. After spending time working with platform, agency and distribution partners in China, McPheters plans to use that knowledge to help individual brands launch in the region with new collections.

“It’s a big learning curve, and there are a lot of cool brands that the Chinese customer would love, but are relatively small and don’t have the resources to figure out the Chinese platform,” said McPheters. “I see that being a big opportunity for us.”